There was a special symbolism in Madam Justice Bertha Wilson’s appointment to the Supreme Court of Canada last week. It was not just a case of another institution being opened to women. The Supreme Court is the institution that ruled within Wilson’s own lifetime that women were not legally persons at all. Although that 1928 decision was quickly reversed by the Privy Council in London—then the court of last resort for Canada—later cases would settle the Supreme Court’s reputation as a place where women were not quite the equals of men. With Canadians still waiting to take possession of their own constitution (and its hard-fought equal-rights protections), the Wilson appointment immediately altered the grey, masculine character of the country’s highest court.

Despite the acclaim that greeted Justice Minister Jean Chrétien’s announcement of the cabinet’s choice, Wilson’s rise from the Ontario Court of Appeal had not been a sure thing. Chrétien has been subjected for months to intense lobbying from the attorneys general of Ontario and Saskatchewan, each pressing his own favorites to succeed the retiring Mr. Justice Ronald Martland. Ontario’s Roy McMurtry argued that his province missed its rightful turn for a representative on the high court in 1978, when Ottawa instead recruited Mr. Justice William McIntyre

from British Columbia. As a result, Ontario has been one short of its traditional three-judge allotment. (Only Quebec, with its distinctive civil code, has a statutory quota of Supreme Court judges—three.) Saskatchewan’s Roy Romanow, on the other hand, cited the tradition that Martland, as a westerner, should be succeeded by another judge from the region.

There had also been a less savory kind of opposition to Wilson herself from some elements of the legal establishment—a few lawyers discreetly telling Chrétien that Wilson was weak in criminal law, that she couldn’t work well with other judges on the nine-member court, or that the close fraternity of barristers would not accept her. Wilson’s admirers put much of that down to sexist prejudice. Having made the usual soundings among lawyers and judges (and with Chief Justice Bora Laskin), Chrétien successfully pushed her name through cabinet.

As the soft burr in her voice still hints, the 58-year-old Wilson was born and raised in the Lowland town of Kirkcaldy, Scotland, by the Firth of Forth. After receiving her MA at the University of Aberdeen, Wilson and her husband, John, emigrated to Canada in 1949—he to become a Presbyterian minister in the Ottawa Valley. Six years later they moved to Halifax, where Bertha enrolled at Dalhousie University law school. In 1959 she joined the large Toronto law firm of Osier, Hoskin and Harcourt, where she eventually became a senior partner as the firm’s research director.

Named to the Appeal Court in 1975— the first woman to scale such judicial heights in Canada—she has since shown herself unafraid to innovate. In the case of an East Indian woman complaining of discrimination by a community college that would not hire her, Wilson ruled that the woman had a right to sue for damages rather than just seek redress through the Ontario Human Rights Commission. When the case reached the Supreme Court last year, Laskin commended the Wilson judgment “as an attempt to advance the common law.” But the Laskin court still overturned the decision on grounds that Ontario law provided other remedies for the victim of discrimination. Wilson also ruled for a little girl barred from a children’s softball league reserved for boys. In that, she was outvoted by two male justices.

Wilson’s technical ability is unquestioned. Says Gordon Henderson, past president of the Canadian Bar Association: “She is a bloody good judge. She has proven her ability.” Because of her expansive view of the law, she is thought likely to become an ally of the liberal Laskin in legal rights and dis-

crimination cases; Laskin heretofore has often found himself in a dissenting minority against the court’s conservative wing.

A stalwart among the conservative judges until forced by law to retire on his 75th birthday, Feb. 10, Martland is now off the bench but not quite out of the court building. He has until July to render his opinions on some 30 cases heard by the court but not yet judged. Martland was named to the court by John Diefenbaker in 1958, and he has since heard an astonishing 1,709 recorded cases and written more than 300 majority, concurring and dissenting judgments. Some of those decisions still bother civil rights proponents. In the landmark 1971 Wray case, for one, Martland wrote for the majority in ruling that a trial judge has no authority to exclude evidence in a criminal case just because police obtained it illegally. Martland told Maclean’s last week that his opinion is unchanged. “Letting criminals walk the streets is not a very satisfactory way to punish the police,” he said.

Nor does Martland—one of two justices who found the Trudeau constitution package illegal without provincial consent—like the idea of the proposed entrenched charter. Under it, the courts would enforce rights breached by police, bureaucrats or even by the legislatures and Parliament. “It curtails the power of Parliament and the legislatures— putting it in the hands ultimately of a nine-man tribunal. I don’t think that’s desirable,” declared Martland.

The retiring justice is especially critical of a charter clause that would permit a judge to throw out evidence if its use would “bring the administration of justice into disrepute.” Rules of -evidence and of police behavior should be made by legislators, not judges, he says. At the same time, there is a limit to how fastidious the police can be in their crime-fighting. “Can police carry out their duties if they obey the rules of honor that would operate in an Eton cricket game?” he asks. Armed with the far-reaching terms of the United States constitution, says Martland, “U.S. courts have created results that are appalling.” There is, however, a far more conservative tradition among Canadian lawyers and judges than prevails in the United States—which even the new charter is unlikely to alter soon. Says Martland: “I don’t think the charter is going to change their habit of mind.” More probably, the charter will encourage discreet assertions of judicial authority as judges across the country take a lead from the brothers and sister of the Laskin court. 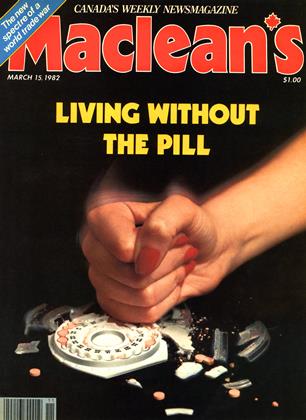