Please do not get me wrong. I am a Liberal. In fact, I received a devout Liberal upbringing in Calgary. That is roughly like growing up a Catholic in Orangeville. However, I admit to spotty observance. It is not that I am lapsed. It is just that I vote NDP half the time. The Liberal party used to serve as the omnibus for a healthy proportion of the less advantaged and most self-conscious non-WASPS. Its load factor dropped long before Jim Coutts lost Spadina to the NDP last summer. Its decline takes us far in explaining why our Liberal generation can only muster its ranks in times of clear and present danger. Threats of regressive Tory economic policies in 1974 and 1980 galvanized us all. However, we backslid (minority governments) through all but one election, 1968, in the ’60s. We gave repeat performances in 1972 and 1979. Those of us who have acquired “a piece of the rock” without suffering qualms have become cryptoTories; some, with residual rage over the social injustices faced by our ancestors, flirt with the NDP. Caught between the two factions, our dumbfounded party has given us little to fight for. Results of the Gallup poll released Feb. 10 got it about right. On a scale of 100, our ardor for the cause hovers around 35.

By suggesting that the time has come for Pierre Elliott Trudeau to resign, I am grasping for straws. Notwithstanding all the evidence that our omnibus is ready for the wrecker, Liberals claim a divine right to rule. During the past three years I have joined several party gatherings trying to plot our future. Invariably we have come to the conclusion that few dare utter publicly: to preserve our rule, “Trudeau must go.” Nonetheless, do not count me among those who have missed the more obvious point. Currently, the party stands for little worth saving. Trudeau’s departure will simply make us aware that we have tried too long to fill a vacuum with flamboyant leadership.

Trudeau should resign for the good of the party. History will justly mark him as one of our greatest prime ministers, but a party cannot live on personae alone. Early on, Trudeau’s charisma energized Liberals. It gave direction to their deep, though seldom voiced commitments: world peace, creative federalism, industrial development, social justice and responsive and efficient government.

Sadly, Trudeau has taken too little note of Plato’s Republic on the corruptibility of the philosopher king. Take a good look at the man whom, in 1968, we saw as a leader of principle. On the international front he has taken us up to our eyeballs in American policies. Before, we were only up to our necks. In token defiance, he serves up an endorsement of martial law in Poland. Of course he can cite his 1970 suspension of civil liberties as a precedent. We duly note his concern for the Third World. We record as well his flippant remarks about Biafra, his getting stranded in an exclusive Austrian ski resort while on his way to the North-South dialogue, his cavorting with oil-rich sheiks and kings, and his govern-

When Trudeau took office we called federalism “co-operative.” Ultimately, he set aside constitutional convention in an effort to force us into his unitary mould. It took the intervention of the Supreme Court to save the provinces from becoming administrative districts. After the 1980 election, Trudeau’s cabinet luminaries set out to fulfil the Liberals’ campaign promise of a new industrial strategy. Ultimately, they came up with promises of cash for mega-projects designed to provide better infrastructures for hewing wood and drawing water. Trudeau’s social reforms pale beside King’s, St. Laurent’s, Pearson’s—even Diefenbaker’s. Indeed, his current efforts to cut federal payments to the provinces will turn our retreat from the welfare state into a rout. Ronald Reagan will become green with envy. He has to get his repeal of the New Deal through two legislatures with teeth.

In 1968, Trudeau held out great hope for parliamentary reform and participatory democracy. In fact, he turned the Liberal caucus into such a blind adherent to Westminster-style party discipline that, until last fall, his constitutional advisers failed to understand that Britain’s majority government could not ram a bogus Canada Bill through its Parliament. Trudeau has reshaped the bureaucracy according to his image and likeness. Canadians would become outraged if they knew that the staffs and resources available to the prime minister and the cabinet for co-ordinating and controlling bureaucracy nearly equal, in real terms, those in Washington and more than double those in London. Still, the government projected, for the current fiscal year, spending that would exceed revenues by 25 per cent.

This bill of particulars simply highlights the ways in which Trudeau’s leadership falls hopelessly short of Liberal ideals. Go to any party meeting off Parliament Hill and you will hear the same indictment in stereo. But, we find ourselves incapable of action. The Liberal view of party discipline makes virtually no allowance for caucus or party factions that publicly criticize our leader and his policies. We Liberals take little solace from tantalizing speculation in the David Frost interview. Trudeau always adds his “buts,” which so far have prevailed. The longer he stays in office, the farther he will slide down his slippery slope. He requires many more personal accomplishments to cover the failures accumulating against his ultimate capital, namely his place in the history books. As well, too many advisers in his personalized bureaucracy will counsel against resignation. They do not want to jeopardize their positions. No, Trudeau will likely lead the party into the next election. If he does, a lot of us will once again be voting Tory or NDP. Of course, we still have time for a palace revolt.

Colin Campbell is associate professor of political science and co-ordinator of the Public Policy and Administration Program at York University in Toronto. His books include The Superbureaucrats, written with George J. Szablowski. 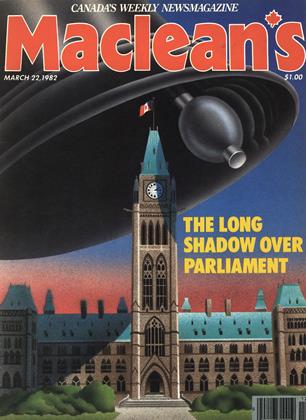