The federal government’s three-year effort to market Telidon, its much-vaunted two-way computer-based communications system, has been a tough if ever-optimistic battle. But after recent urgings from the government to take more of a hand in their own futures, several of the largest Canadian videotex companies are now mounting their own united international marketing effort—in what appears, in at least one form, to be a proposal for a near-cartel in the Canadian videotex marketing establishment.

The move comes at a time when videotex companies and the government are under pressure to prove that Telidon is here to stay. Ever since Telidon—a system for sending words and color pictures back and forth between computer terminals and television sets—was developed in the late ’70s by the department of communications (DOC) in Ottawa, the government has been keen to underwrite the industry. One of the main beneficiaries of Ottawa’s largess has been Infomart, the experimental information and videotex venture of Torstar Corp. and Southam Inc. Since Infomart began marketing Telidon in 1979, the DOC has picked up 60 per cent of Infomart’s Telidonrelated international marketing costs.

With that agreement due to expire at the end of this year, and the DOC committed to phasing out export aid to the industry once it climbs off its knees, Infomart has a particular interest in making the planned association work. Various proposals on the association’s eventual form are being guided by Da-

vid Carlisle, Infomart’s president, in his role as chairman of the marketing subcommittee of the Canadian Videotex Consultative Committee (CVCC), an industry-based group that advises the government. Carlisle maintains that the plans are nowhere near complete, still others claim one proposed version of an association that surfaced at a March 5 subcommittee meeting suggested that the association sell voting shares for $50,000; nonvoting shares would cost $10,000. Present at the meeting were, among others, Infomart, Norpak Ltd., and other “major players” in the industry. What would members get for their money? “That was the question I asked,” says Dan O’Connell, president of Faxtel Information Systems Ltd., a small videotex applications company. “And I guess the nub of it was ‘information.’ ” Anything, that is, that will ensure a successful effort to market Telidon abroad.

But what about smaller videotex companies that cannot afford the price of admission? It could be argued, if such an association went ahead, that manufacturers or exporters who cannot afford $10,000 won’t be going far in the international videotex market. Even Infomart has had a hard time in the international marketplace. Torstar and Southam have backed Infomart to the tune of at least $12 million, but the list of non-domestic clients with which Infomart has actually signed contracts is by now only too familiar: Time Inc., the Times Mirror Co. of Los Angeles, Standard Telephone and Radio in Switzerland and the Venezuelan government. “There’s a number of customers we’re very close to signing,” adds Neil Baird, Infomart’s vice-president of marketing, “but I can’t tell you who they are.” Such is always the case in the future-touting videotex industry.

Nonetheless, there are small videotex companies that find the mere contemplation of an export association to be symptomatic of the Canadian videotex industry’s inherent bias toward its biggest players. David Godfrey, vice-president of the B.C.-based Information Technology Group, says his group was turned down for government funds and left uninformed by the federal trade department about a major New York videotex show. Other small players feel that to create a limited-entry marketing club dominated by Infomart is to ask for a monopoly. Even a request by Maclean's for information on how much money the external affairs department’s Telidon-Marketing Secretariat has spent elicited no co-operation from Director Cameron Miller, who refused to disclose the amount. Why? “I don’t care to tell you.” Why? “Just because I decide not to.” Information cartels, indeed. -IAN BROWN 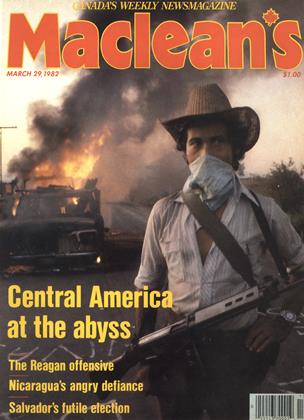