terparts term “union problems.” So last fall when a union tried to organize Panasonic’s huge television plant in westend Toronto, the move caused more than the usual excitement. For Neil Nagano, Panasonic’s president, the attempt was personally upsetting. Nagano is, after all, one of a breed of Japanese managers legendary for keeping employees satisfied and productive

without the intervention of third-party organizers.

Even worse, Panasonic is part of the enormous Matsushita Electric Industrial empire. Its founder, Konosuke Matsushita, was one of the innovators of the “corporate family” management philosophy that has in the past decade been touted as a main reason for Japan’s rise to a trillion-dollar economy. At the 110 Matsushita electronics plants in Japan, employees are not only satisfied and productive, they begin each workday by singing the company song: “We trust our strength together/ In harmony/Finding happiness/Matsushita Electric.”

Nagano has clearly kept his workers productive. Panasonic’s Canadian plant, which started from nothing in 1972, is now second only to RCA with sales of $55.4 million in 1981. That rep-

resents 120,000 television units, onehalf of them going to the United States. And he has tried to keep everyone satisfied as well. For eight years, until the plant was organized in March, 1980, by the United Electrical, Radio and Machine Workers of America, Nagano operated it at his own discretion along Japanese management lines. Among other things, that meant no layoffs, less direct supervision and the introduction of methods designed to relieve job tedium. Not only that, there were worker group meetings every morning to discuss the day’s projects, air;

complaints and give suggestions.

As a result, when the majority of his employees voted for the union it was a hard blow for Nagano. But not, he points out, because he is against unions. Matsushita workers, after all, have their own unions in Japan. It was because, as he puts it, “I didn’t know if I had been doing the right thing. Our business philosophy is that profit is just a reward for having made a contribution, for having done something good for people. If our employees are not happy, the philosophy doesn’t make any sense.”

For his part, Mario Couto, a leading union organizer, is unrepentant. “I have no problems with the way the management is,” he says. “But the wages are lower than at other plants.” Not all the employees share Couto’s resentment over the $5.50-per-hour average wage.

Panasonic’s Canadian employees don’t sing the company song, nor did they respond well to exercise classes before work. But in the large, clean television assembly room, as hundreds of sets flashing blue and green move briskly on the conveyor belts, people along the line smile easily as Nagano walks past. By their own decision, the 250 employees work slightly longer hours Monday to Thursday so that they can leave at 2:30 on Friday afternoons. A few times throughout the year, work stops at noon on Fridays for a party—at company expense. A barbecue last summer featured steaks, beer, wine and dancing to rock music. “I’ve been here three years,” says one blue-smocked woman, with some pride. “The management is very nice. I know people who have quit and are sorry.”

Edward Tomajko, the redheaded manager of manufacturing services who spent many years working for a Canadian-run tobacco firm, shares that sentiment. “Matsushita treats its employees better,” he says. “It’s hard to explain. People feel more comfortable. There’s pressure for production, and everyone’s got a job to do, but nobody is really standing there with a big stick.”

That may be one reason why, when it came down to a secret ballot vote last fall, 62 per cent of Panasonic’s employees decided that maybe they didn’t need third-party representation after all. They voted out the union. Steward Couto is philosophical about the decision. “If that’s the way people want it, that’s the way it will be,” he says.

Nagano, his concepts vindicated somewhat by the vote, anticipates “no further problems.” He also hopes there will be no further layoffs, a move Nagano was forced to make for the first time last year when market conditions slumped. With that act he went against one of the main Japanese management credos of “lifetime employment,” to provide permanent job security and increase the “family” feeling of loyalty to the company. “My hands were tied,” he says, indicating that the layoffs were spelled out in the union contract, and he could not set a precedent by not sticking to it. A precedent, however, does seem to have been set in one sense at least— that of North American workers responding positively to a Japanese managerial mode. Nagano, whose loyalty to Japan’s industrial philosophy does not, incidentally, seem to extend to that country’s products—he drives a 1982 Oldsmobile 98—sums up his system in a very few words. “We try,” he says, “to treat people like human beings.” 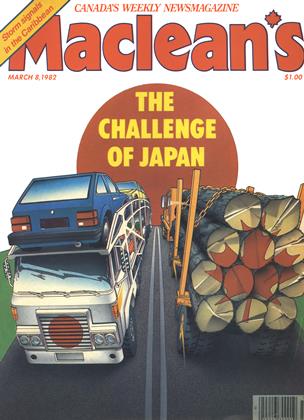