No more Cinderella for the Expos Hal Quinn April 12 1982

In spring, when young ballplayers’ thoughts turn to option years and multimillion-dollar contracts, a young man in a Montreal Expos uniform turns his thoughts to winter. “I guess the snow’s just about gone in Quebec,” muses Gary Carter. “I sure would have liked to have gone skiing. But there’s a clause in my contract that doesn’t let me.” Rodney Scott, another young man wearing the same uniform, doesn’t let the chance slip by. “Shoot, man,” he says, “with your contract you would buy your own mountain.” The players around the batting cage laugh, Carter moans. It’s a week before the 1982 baseball season and the Expos are relaxed, though some are still fighting for jobs, and one of them is a very rich man.

Widely admired in the baseball universe for the skill of its athletes, the smarts of its front office and the fecundity of its farm system, le Club de Baseball Montréal is still not a serene organization. The 13-year-old team’s partisans have experienced the exhilaration and despair of three consecutive down-to-the-wire seasons, and the club’s managers know that this is the year the Expos have to make it to the top. Attendance has been at a plateau for the past three years and, in Montreal especially, there is no substitute for victory. “We’ve blown it three times,” says team holler guy and provisional right fielder Warren Cromartie, “now we have to go out and get it.”

The Expos’ steady progress toward the World Series grail has been largely based on a farm system that in 13 years has become the most productive in baseball. On most evenings last year, eight of the nine Expos on the field were products of the team’s six minor-league squads.

In a sport that features an endless dance of player swaps and sales, such a rich reward for patience is rare indeed. But one of the few things the farm system hasn’t produced is left-handed power at the plate. So, in an uncharacteristically go-for-broke

style, Expos President John McHale went out last week and got himself a left-handed slugger.

AÍ Oliver has hit over .300 in each of the past six seasons and driven in an average of 82 runs a year in his 14-year major-league career. Those are the numbers and the consistency that the Expos think they need to finally make it to the top. The acquisition is not a longrange move—Oliver is 35—but the team needs a title now and not just glowing reports about talent down on the farm.

It was that awareness that made Gary Carter the richest professional athlete ever to play in Canada. A happy and hitting Carter is what the team requires and that’s what it seems to have bought itself.

“With my contract resolved and all, I’m just having a good time, having fun,” smiles Carter. “I don’t feel any pressure on me at all. It’s just a matter of going out and playing the game.”

Last season Carter went out and played better than any catcher in baseball. He was a National League Allstar (hitting two home runs and winning the most valuable player award in that game), won the Gold Glove as the best defensive catcher and the Silver Slugger award as the best hitting catcher. His reward—a seven-year contract that gives him an annual income of slightly more than $2 million. President McHale says, “We looked back at the four great years Gary has given us at a salary well below the market.” But if the Expos are to reach the next step on their climb to the World Series, Carter will have to earn every U.S. dollar of the new pact.

Manager Jim Fanning, who took over from Dick Williams last September, is exuberant in his optimism about his club and particularly about 27-year-old Carter. “I don’t know what his numbers will be but they are almost unlimited when it comes to the long balls and runs batted in. And what a lot of people forget about Carter, and a lot of our guys, is that his peak years are still ahead of him.” To insure those years, the Expos signed free agent Tim Blackwell, acknowledged as one of the game’s premier defensive catchers, to relieve Carter. For the fifth year in a row, last season Carter led the majors in number of games caught, tying the all-time record. “If Gary Carter stays healthy,” Carter says, briefly employing baseball’s third person, “and gets some rest to Blackwell, I’ll be fresh for the pennant drive in October.”

But despite the hopes for the hitters, the strength of the Expos, according to Whitey Herzog, manager and general manager of the St. Louis Cardinals, is the Expo pitching staff. “An injury to one of their key people will cause real problems. They’re going to be strong but they’re going to be strong because their four starting pitchers are as good as any four in baseball.”

While the Cardinals, chief rivals to the Expos with the best record in the East last year, have the premier reliever in Bruce Sutter, Herzog admits, “Our starters aren’t exactly household names.” After last year’s post-season prime-time play, Steve Rogers and Ray Burris of the Expos have joined that category. “Those two should be walking 10 feet off the ground,” says Fanning. “Rogers -is one of the best and knows now that he can win 20 games, and after last September and October Burris has really become a

frontline pitcher. He’s been helped immeasurably in spring training by Woodie.” Woodie is Woodie Fryman, the ageless one (he’ll be 42 on April 12) who won five and lost three with an earned-run average of 1.88 last year.

The second pair in the starting four make rival managers in Chicago, Philadelphia, New York and Pittsburgh envious. Fireballers both, Scott Sanderson, 25, won nine last year with an ERA of 2.96, and Bill Gullickson, 23, won seven losing nine in a hard-luck campaign that had the 10th lowest ERA in the league. David Palmer and Charlie Lea, who pitched a no-hitter last year, are responding well to therapy for arm injuries and either may return as a formidable fifth starter. Jeff Reardon, acquired from the Mets last year for Ellis

Valentine, provides excellent company for Fryman in the bullpen. Reardon was 3-0 last year with an ERA of 2.19. Out there with him will be Bill Lee, relieving and spot-starting, while still working on his “Spaceman” routine after all these years.

True to the baseball axiom that you can’t win without strength up the middle, the Expos have established that with Carter, the pitching staff and André Dawson in centre field. The taciturn “Hawk” Dawson, who won the Gold Glove, Silver Slugger, The Sporting News Player of the Year and Expos Player of the Year awards, was the National League’s all-star centre fielder and runner-up to Philadelphia’s Mike Schmidt as the league’s most valuable player. Dawson hit .302, with 24 home runs and 26 stolen bases. Fanning thinks he’ll have a better season this

time around. “André really hasn’t come close to all the things he can do,” says the manager. “Last year he was labelled as the best all-round player in baseball. That’s a pretty big handicap when the player is being asked about it, almost on a daily basis. I think that’s going to diminish now and free him to just be a baseball player.” Left to do that, Dawson, 27, may just earn the label.

The Oliver trade exacerbates the talent crunch for the team. As usual, the farm system has thrown up a couple of players who would have no problem making most major-league teams. Terry Francona hit .354 in the minors and was named rookie of the year. Replacing an injured Tim Raines (who stole 71 bases in 88 games) late last season, Francona played 26 errorless

games and hit .333 against Philadelphia in the playoffs. His young rival in right, Tim Wallach, played three positions for the Expos last year (right, first and third base), committing but one error in 71 games. A vaunted home-run hitter and former Sporting News college player of the year, Wallach hit 54 home runs in his two minor-league seasons.

Fanning is considering platooning Cromartie in right field to give the youngters a chance. Platooning may be the answer in the infield too. Incumbent second baseman Rodney Scott is coming off a season in which he hit only .205 and shortstop Chris Speier hit but .225. Rookie second baseman Wallace Johnson has proven his ability with a bat hitting .363 and .298 in his last two minor-league seasons and has worked hard at disproving his “no-field” label during spring training. The Expos

traded for shortstop Frank Taveras to push Speier. Taveras has a career batting average of .257 in eight seasons and led the majors in stolen bases in 1977 with 70. To replace third baseman Larry Parrish, who departed to Texas in return for Oliver, Fanning will probably platoon Wallach and yet another promising youngster, Brad Mills.

However the team patches itself together for the season, it will face formidable competition just to get out of the National League East. Many have written off the Philadelphia Phillies in the race, but as Herzog points out, “As long as you have Manny Trillo, Ivan DeJesus, Peter Rose and Mike Schmidt in your infield you’re going to be right in there. And pitcher Steve Carlton will keep them out of losing streaks.” Herzog’s own quartet of Ozzie Smith, acquired from San Diego for the troubled but extremely talented Garry Templeton, Keith Hernandez, Tom Herr and Ken Oberkfell includes gold gloves and silver bats; warns Herzog: “This is the best team I’ve ever taken north from Florida.”

The Pittsburgh Pirates, World Series champions just three years ago, are attempting to replace age with youth. The key to their season will be how well the starting pitchers John Candelería and Don Robinson rebound from injuries. They will still have last year’s batting champion Bill Madlock at third, Omar Moreno in centre and Dave Parker in right. After repeated trade rumors, Parker, down to about 235 lb. from 265 lb., will be with them at the start at least. And so will Willie (Pops) Stargell, at 41, in his 21st and last season. “I look at my career and savor it like a good meal,” says Pops. “Right now I feel I’m on dessert.”

There should be nothing but leftovers for the Mets and the Cubs. New York acquired slugger George Foster from Cincinnati to team with power-hitting Dave Kingman in the middle of their batting order. If Ellis Valentine plays as he did for the Expos in 1980, the Mets will have their own version of “Murderers’ Row.” Pitching and defence will again be the problem. In Chicago, general manager Dallas Green is merely trying to stop the laughing. “Even the ushers have the look of losers about them,” he says. Green brought a group over with him from Philadelphia, but long-suffering Cubbies fans will have to suffer quite a bit longer.

However, optimism blooms in spring, and with the air still fresh and brisk in Montreal the Expos have given up on the erratic Parrish and the young brilliance of Dave Hostetler, for what they hope will be vintage Oliver. With the move in the first week of spring, the Expos have made a strong commitment to October. 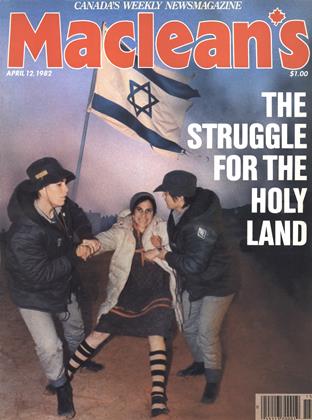