An editor returns to what he enjoys doing the most Peter C. Newman May 24 1982

After more than 11 years, I have decided to resign the editorship of Maclean's as of September 1, 1982. When I came to this magazine in the winter of 1971 I had a clear idea of what I hoped to accomplish—to put together a publication for which the best writers, editors, illustrators and photographers would be proud to work, and to provide a creative atmosphere for them to practise their craft. The doing of it turned out to be more difficult than I could have imagined. Still, having myself labored in the trenches of daily journalism for many years, I believe Maclean’s has granted its staff more freedom, more breathing space and more stylistic licence than any other mass medium in the country.

At its best, Maclean’s is a mirror in which Canadians glimpse one another and recognize themselves. We have attempted to refine the country’s image of itself, and, in the process, Canada’s self-anointed national magazine realized new potentials. During my stewardship we have grown from a jitney staff of 11 trying to stay afloat on a yearly editorial budget of less than $400,000 to the vibrant group listed beside this column, spending more than $5 million in the gathering and presentation of news. Our weekly readership is nudging 2xh million, and the magazine’s financial outlook has never been healthier.

It has been a joy giving magazine reporters the chance to practise a new style of uncompromising journalism—an approach to reporting that attempts to make sense of the moments that endow history with its excitement and meaning.

I have always felt that what makes any periodical special is that its editor is possessed by a strong sense of audience that touches the readers’ genuine concerns and emotions. This is not so much a matter of dictating a magazine’s contents, or even of presiding as chief arbiter over any particular editorial mix, as of trying to fathom its audience’s collective frame of mind. The mark of any editor worth his salt is that he never knows precisely what he should publish. There is no formula. More eager to capture the mood of his time than to advocate any specific set of ideas, he must have a constantly renewable curiosity. The trick is to report not so much what has happened as how and why it is happening. That remains the quintessential difference between daily and magazine journalism. At Maclean’s, editors must also think nationally, and take into account the subtle differences in sensibilities that separate Canadians from Americans.

I am hoisting anchor at Maclean’s because I feel that my mandate has been fulfilled and I plan to pursue other journalistic adventures, including a regular column in Maclean’s. I was a writer before I became an editor and I am returning to what I enjoy doing most. My stint here has been exhilarating, and I thank the readers of this magazine for sharing a slice of their time with me. 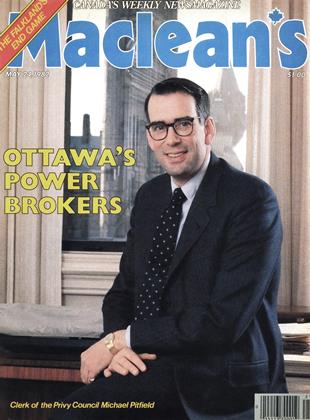