Battle stations in the South Atlantic Jane O’Hara,Carol Kennedy May 3 1982

In Washington last week, British Foreign Secretary Francis Pym declared that his country’s fleet in the South Atlantic is now fully prepared for outright war to regain control of the disputed Falkland Islands. In Buenos Aires, Argentine President Leopoldo Galtieri shot back that his troops are more able than ever to hold the islands, whatever the costs. Then the BBC warned the 17,000 British nationals in Argentina to depart the country as soon as possible, and the British armada, which left Portsmouth on April 5, steamed into the storm-tossed waters around the South Georgia Islands, 1,200 km from the main archipelago. For the first time, the naval force was within range of Argentine attack aircraft. By week’s end the war of words over Argentina’s occupation of the Falklands was still only that. But as the hours passed, the outbreak of real war grew perilously close.

Certainly, the preparations for a fighting war were ceaseless. The British task force manned 24-hour defence stations, donning helmets and sleeping in uniform, while the 43-ship armada steamed into Argentina’s war zone. In the Argentine city of Comodoro Rivadavia, a military bridgehead 640 km from the Falklands, small schoolchildren ducked beneath wooden desks in drills against British bombing. Near

a deserted railway yard in Buenos Aires, a dozen 18-year-old conscripts picked up bugles for the first time and practised the eerie call of a 19th-century cavalry charge.

At the same time, U.S. Secretary of State Alexander Haig attempted to keep the two sides talking. But what appeared increasingly inevitable last week was that it was only a matter of time before someone fired the first shot.

In London, daily headlines screamed ONE DAY CLOSER TO WAR and polls showed that one in two Britons still feels that a putative war is worth the loss of British lives. For his part, Pym flew to Washington with a series of counterproposals to those offered by Argentina earlier in the week. After two days of meetings with Haig and a visit with President Ronald Reagan, Pym flew back to London to confer with Prime Minister Margaret Thatcher after admitting, “I will not disguise from you that there are real difficulties and real obstacles.” The intractable problem: neither Thatcher nor Galtieri will back down on whose flag will fly over the Falklands.

Despite Conservative MPs’ firm support in the Commons for Thatcher’s warlike posture, back-benchers had clear reservations about whether Britain should sanction the firing of an opening salvo. Early in the week, Pym— who won the Miltary Cross for coolness

under fire during the Second World War—appeared to have lost it during parliamentary debate. He admitted that Britain has excluded the possibility of military action “so long as negotiations are in play.”

Later, Pym intervened and corrected himself. “The use of force cannot be ruled out at any stage,” he declared. To British military experts, however, the damage could not be so easily repaired. Pym’s slip, they said, had shown that Britain was backing away from a fight and was unwilling to make concessions; that it had passively conceded sovereignty and undermined the naval task force. In other circles, however, British skittishness is considered to be a diversionary tactic to lull the Argentines.

Meanwhile, in an interview aboard the armada’s flagship, Hermes, Rear Admiral John Woodward sounded an ominous warning: “If my job is to blow heads off,” he said, “I’ll do it in the most effective and efficient way I have to.”

By Friday two ships had pierced the Argentine war zone and sailed within 100 km of South Georgia. One suggested strategy was that the task force would invade the barren island where only a handful of Argentine troops are stationed. A brief fight for the windswept islands would give the British a land base from which to assault the Falklands as well as deliver a psychological blow to the Argentines.

In Argentina, where the American

film Coming Home has been pulled from the cinemas for being antiwar, Galtieri undertook some tactical manoeuvres of his own. With swagger stick in hand, the president visited his 10,000 well-dug-in troops on the Falklands for the first time. During a five-hour visit to Port Stanley, renamed Puerto Argentino by presidential decree, Galtieri in finest Pattonesque manner signalled to the British that the Argentine forces were prepared to fight to the last man. Said the president: “The Argentine flag will fly so long as there is spirit in the heart and blood in the veins of all Argentines.”

It was a bravura performance, and any suspicions that it was merely spectacle for the sake of raising Argentine morale were quickly swept aside. No sooner had Galtieri left for the Falklands than ambassadors from the Soviet Union and its satellite countries began filing through the massive portals of the foreign ministry to be briefed on the military situation. Galtieri’s government has long been considered one of the most anti-Communist in Latin America, but by week’s end many Western diplomats were admitting that war can make strange bedfellows.

Argentina’s dire economic straits only strengthened the impression that if a Communist helping hand was proferred it would not be brushed aside lightly. In Buenos Aires, where banks and finance houses have been closing with alarming frequency, the nation’s

largest finance company, Rio Paraña, shut down last Thursday after a run on deposits. Argentine banks have reported losing 1.7 per cent of their deposits daily. Argentine pesos are impossible to sell except on the black market.

As the pendulum of belligerence swung between Buenos Aires and London, hopes dimmed in Washington for a diplomatic solution. Although Haig’s native tenacity had managed to keep the two sides talking, his 50,000-km shuttle peace mission was increasingly being viewed as an embarrassment to

the White House, which looked as though it wanted a settlement more than its two bellicose allies. After Haig’s second trip to Buenos Aires, the writing was clearly on the wall. Less than an hour after the secretary left for Washington with Argentine proposals in hand, Argentina’s foreign minister, Nicanor Costa Mendez, announced that he planned to invoke the Rio Treaty at a Monday meeting of the Organization of American States.

The treaty, which calls for mutual military assistance from the 21 signatory countries in event of an unprovoked attack, will further force the Americans to take sides. Argentina, however, could run into problems convincing the pact allies that Britain was unprovoked in its attempts to reclaim the Falklands. Already, Mexican legislator Sobarzo Loaiza has stated that his country will oppose invocation of the treaty.

Events, which more than three — weeks ago looked to be as harmless as a misplaced scene from The Pirates of Penzance, have escalated to the brink of all-out war. Lost in the mists of all the military manoeuvring are the 1,800 kelpers whose island may soon be a battleground but who haven’t lost their allegiance to the Crown. Said William Luxton, who was recently shipped home to Britain: “The people are frightened. But I think they are looking forward to seeing 30 Harriers come screaming over the horizon.” The Islanders may well get their wish.__

Good shot general,” enthused the excitable television announcer. For a country on a war footing it could have meant that the first British targets had been hit. Instead, it referred to Secretary of State Alexander Haig’s tennis game, which was broadcast nationally—at the fourstar general’s insistence—during one of Argentina’s most popular Sunday afternoon sports programs, Polémica en el Futbol (Soccer Talk). Haig’s shortpants diplomatic style left much to be desired. But the substance of the gesture was clear: it illustrated the secretary’s attempts to make points with Argentine public opinion in the heated propaganda war that is now being waged on all sides.

Amid a cascade of predictions that time is running out for a peaceful settlement of the Falkland Islands crisis, Haig’s break from the bargaining table

during his second visit to Buenos Aires seemed almost irresponsible. But in the world of shuttle diplomacy—which has so far cost Washington $2 million in hotel bills alone—his time was not wasted.

Haig failed to soften the gun-metal resolve of the military j unta or stem the inchoate anti-Yankee sentiment that resulted from reports that the United States was sending Britain special intelligence reports on Argentina’s military moves. Instead, the -

secretary’s tennis playing, Haig: church as well as his dutiful attendance at 10 o’clock mass, was part of a timeworn Madison Avenue-style campaign to convince the predominantly Roman Catholic, sports-addicted Argentines that he is one of them. Rev. Jorge Coma, for one, was clearly impressed. He took time out from his sermon to compliment Haig for going to

mass “despite all the problems and pressures.” Although the irony of the White House hawk being sent on a peace mission was perhaps lost on the Argentines, Haig’s surprising show of piety did not go unnoted by one state department aide, who claimed that in Washington Haig never goes to mass.

Haig’s posturing has been for domestic as well as Argentine consumption. Having pleaded for the job of shuttle diplomat—once held by his for-

tense pressure in Washington to produce a peace settlement. In Argentina, where the military presence is so overwhelming that it is difficult to tell a four-star general from a hotel bellhop, perhaps the only ploy Haig has yet to try is to take his own military costume out of mothballs. 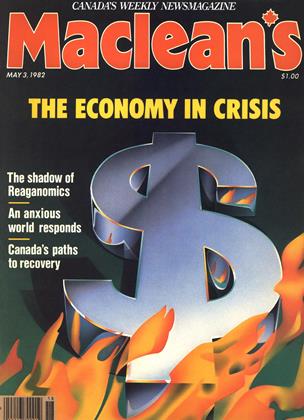