The long, somnolent Washington summer may be livelier than usual this year. Congressional hearings are planned to probe charges—levelled last week by Boston attorney John Loftus—that U.S. intelligence agencies engaged in a massive coverup of Nazi war criminals smuggled into the country at the end of the Second World War. A former justice department prosecutor, Loftus told CBS’s 60 Minutes that, in exchange for espionage and propaganda services, a secret state department unit arranged the illegal immigration of hundreds of Nazi collaborators, found them government jobs and gave them citizenship. It did so, Loftus claimed, in contravention of explicit presidential orders barring the immigration of Nazi war criminals.

And ever since it has withheld the information from congressional inquiries, the courts, the CIA, the immigration service and the public.

According to Loftus, the state department’s obscure Office of Policy Co-ordination “knew the entire Nazi government of Byelorussia, the president, the vice-presidents, cabinet ministers, governors, mayors and police chiefs were all living in America.” Many of these— some still living and still on government payrolls—either participated in the mass killing of Jews or issued execution orders.

The justice department’s Nazihunting agency—the Office of Special Investigations—had been assembling cases against at least three White Russians; all of them are now deceased. However, Loftus contends that some 300 Byelorussians were brought to the United States and put to work for the CIA, the FBI and Radio Free Europe. Some allegedly drifted north to Canada,

although there is no evidence that could be considered conclusive. Loftus told Maclean’s last week that members of the Canadian Byelorussian contingent may have committed war crimes. “We have suspicions,” Loftus said. “We don’t have proof beyond a reasonable doubt.”

That many Byelorussian collaborators were given covert sanctuary in the United States and that some were guilty of wartime atrocities is not exactly new data. Nazi-hunter Simon Wiesenthal has been saying the same thing for 30 years. But proving that specific collaborators committed specific crimes poses a serious challenge to justice officials. The preferred U.S. route has been to deport Nazis who lied on their immigration papers by claiming not to have been associated with the illfamed movement.

The larger story, however, may be the extent of the intelligence community’s coverup, the destruction of files and the chronic lying to various branches of government. Only one administration official of that era said to have knowledge of the operation is still alive: former U.S. president Richard Nixon. However, his office declined all comment on the story.

In Canada the pursuit of Nazi war criminals is even more problematic than in the United States. The evidence

of crimes is often sketchy. There are legal complications. But perhaps most critically, Ottawa has evinced a clear political aversion to the task. The government has said it will entertain requests for extradition of suspected war criminals but will not prosecute the hundreds of Nazis known to enjoy Canadian citizenship. For Solicitor General Robert Kaplan, extradition of even one certified Nazi would help relieve a distinct embarrassment. Kaplan took office publicly eager to prosecute war crimes only to run into a maze of arguments against prosecution in cabinet

and in the bureaucracy.

Compelled to backpedal, Kaplan may nevertheless soon be taken off the political hook. Maclean ’s has learned that a former German Gestapo officer, accused of supervising the execution of 15,000 Jews in Lithuania in 1941, is now under constant surveillance by the RCMP in Windsor, Ont. West Germany is said to be preparing extradition documents, and an Israeli citizen has stated his willingness to testify as an eyewitness to the crimes. It could be a lively summer in Ottawa as well. 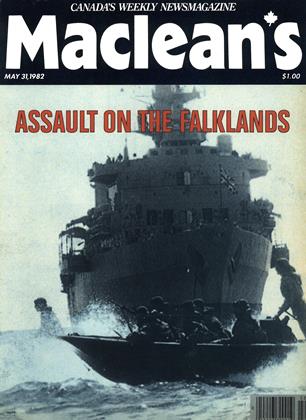