Their helicopters floated out of a cloudless sky into the gilt and gardened wonderland that is a monument to a ruler’s extravagant egomania. But if the seven leaders of the industrialized world’s richest nations chose not to dwell on the unfortunate symbolism of the site for their eighth annual economic summit last weekend, they could not close their eyes to the perils that lurked beneath the Château of Versailles’ hospitable glitter. The tranquil utopia of Louis XIV’s 15,000acre green park had been turned into one of the most elaborate and costly security nets in France’s history. Beyond the rose gardens and waltzing Apollo fountains where they had strolled, an army of 3,000 riot police had sealed off the château behind machine guns and a radar-patrolled airspace quarantine, with a threat to shoot down any aircraft within a four-kilometre radius.

In the pastoral stillness of the forest where Napoleon once galloped, plainclothes security agents hunkered among the oaks with binoculars, walkie-talkies and six hidden batteries of antiaircraft guns and missiles.

Within the extravagant splendor of the 700-room palace where the seven chiefs wined, dined and argued, the redbraided Republican Guard provided them with a colorful reminder of threats from the international terrorist king, Carlos, and the bombs that had already welcomed President Ronald Reagan on his first European foray.

But if the summiteers could not ignore the constraints of a security blanket that required even them to wear gold clearance badges, the real pressures that weighed over their Versailles idyll were the grim facts of the gravest economic crisis since the Great Depression. Under siege from galloping unemployment and inflation, crippling interest rates, bitter trade wars and outcries from both their own suffering electors and the wounded Third World, they had arrived in the Sun King’s Hall of Mirrors having agreed that it was every man for himself.

When the last helicopter lifted off again Monday morning after their $14million get-together over a menu of lan■goustine, foie gras and fireworks, noth-9 ing had basically changed in that in-g ability to orchestrate a concerted solu-^ tion. But the four-page final communi-qué, already drafted by the summit’s* 12-man advance squad of “Sherpas” ins

the weeks before they met, managed to sound a bravely optimistic tone, with a little something for everybody. It spelled out an agreement for immediate action on stabilizing money markets, liberating trade and promoting Third World and technological development. With a silent note of resignation over U.S. intransigence on the subject, it pointedly did not include any consensus on action against interest rates.

The summit gave the Canadians and Europeans a chance to personally denounce Reagan for the interest-rate woes that they had been venting to his officials in the two months of international meetings leading up to what had been dubbed as the “interest-rate summit.” In that sense, Versailles provided a forum to ease the heat from political pressures at home. A top Canadian official confided to Maclean ’s that the delegation of Prime Minister Pierre Trudeau had arrived without either preparation or tactical proposals, hoping to work out its economic strategy later, on the summit’s foundation. But there was no doubt that for Canada the summit was a blow. It was a single-issue meeting for the troubled government of Pierre Trudeau—high interest rates caused by Reaganomics—and on that point it had to concede complete defeat.

There was no lack of trying. French President François Mitterrand set the stage for an interest-rate attack in his opening remarks when he referred repeatedly to the “crisis” caused by high interest rates. But as host he kept his message discreet for the most part. The main charge over a Saturday lunch of pigeon and lobster sauce was led by

German Chancellor Helmut Schmidt, who told Reagan that inflation began not with the 1973 oil crisis but with the way the U.S. had paid for the Vietnam War—by printing money. Trudeau seconded Schmidt by placing the blame even more squarely on U.S. shoulders. “Schmidt implicated the United States,” said External Affairs Minister Mark MacGuigan in a briefing. “We stated it.” Trudeau, he reported, had told Reagan that unless he resolved his budget problems with his Congress and sped up a return to lower rates, the world faced “a choice between a crisis and a catastrophe.”

For his part, Reagan, hoping to score a badly needed foreign policy success out of his nine-day continental sojourn, had arrived prepared for the hashslinging and in a conciliatory mood. But he promised no specific action on interest rates, which he pleaded he was helpless to alter, blaming the money markets for keeping them high as long as his budget remains grounded in Congress. Instead, the U.S. delegation had landed in Paris for Reagan’s visit with Mitterrand two days before the summit amid a publicity blitz saying that they would be willing to budge on the equally contentious exchange-rate issue in a trade-off for a concession on more liberalized markets.

Mitterrand, determined to wrest his own personal success out of the summit as host, leaped on that opening to forge an agreement to investigate closer monetary co-operation on the international exchange markets. That consensus on

the monetary study figured as the final communiqué’s starring paragraph—the opening point of a five-pronged plan of action.

But there was considerable debate about how much the agreement meant in claiming to “work toward an orderly and constructive evolution of the monetary system.” French Finance Minister Jacques Delors had jubilantly announced the proposal to undertake a five-nation study of ways for “stabilization and pacification of the money markets” after the summit’s Friday opening dinner, making clear that he had just wangled the long-awaited nod from both the Japanese and U.S. delegations.

Unable to agree on interest rates, Delors said, “We had to find a breach in the wall of skepticism which surrounds us.” He heatedly insisted that it was not simply “words of goodwill” similar to those wrapping up last July’s Ottawa summit communiqué, signifying nothing. “The new political step we made here is that we now have the will to obtain some quick results,” he said. He promised a report from the study group by July, which would then be presented to the key meeting of the World BankInternational Monetary Fund meeting scheduled for September in Toronto.

But few of the summit participants^ regarded it as the triumph the French claimed it was. Said MacGuigan: “Theg study indicates a change in the theolog-^ ical barrier to this by the United States! government. But I don’t think we canf equate a study at all with action.” Ins

fact, throughout the drafting of the communiqué, the Europeans had pressed for wording that would have implied that all seven countries were advocating intervention on foreign exchange markets while the United States held out for much vaguer wording.

There was even some question of how new the proposal was. A month before the summit, U.S. Treasury Secretary Donald Regan had arrived in Paris for the preparatory OECD ministerial meetings, confiding to the U.S. press corps that, to take the pressure off its high interest rate policy, Washington would propose a study of how well intervention policies worked.

To the Europeans, however, even that indication of the United States’ willingness to discuss the question stands as a hopeful sign that Reagan had become more responsive to his allies’ anguish over the dollar’s erratic fluctuations, playing havoc with their energy costs and investments. Said Delors: “These propositions, for a long time rejected, have finally received a more favorable welcome from the United States.”

Japanese Premier Zenko Suzuki, equally anxious to deflect the summit’s criticism of his staggering foreign trade surpluses and closed home markets, also arrived at Versailles on a conciliatory note. In the month before the summit, Japan had announced a modest and cautious package of tariff reductions and measures to encourage imports. While it had not come near the Americans’ demand for freer access to the Japanese market for beef and oranges, Mitterrand called the measures “extremely useful.”

The communiqué’s other major consensus coup was predictable: Mitterrand’s pet topic, and the current industrial thrust of his Socialist government—the co-ordination of international high technology to boost economic growth. Against a backdrop of the latest made-in-France videotex prototypes he opened Saturday morning’s session with a much-labored-over report calling for a study of the means to promote the development and trade in electronic technology, which also figured as the fifth of the communiqué’s five-point proposals for action.

Those agreements, however, could not mask the more unsettling fact that the 2x/2-day extravaganza still ended with the countries agreeing to disagree on the fundamental solutions to the world’s mounting problems. No other summit had been preceded by such a heightening of tensions between the participants. Since the summit in Ottawa 11 months earlier, another five million people in the industrialized world had joined the unemployment rolls. Another 30 million people had starved to death. Trade skirmishing between mature nations had become so acute that observers warned darkly of a collapse in the world trading system.

Among the seven summiteers growth in domestic consumption had stopped. The political logic dictated export growth to boost production—and jobs. Even Canada had taken off its boy scout hat and started using French-style technicalities to block Japanese cars from entering the country.

Post-Versailles Ottawa can only be a troubled and dispirited capital. By deliberately raising anticipations about Versailles, Canada could be the first to define it as

a failure. Trudeau's di lemmas start with the

autopsy of the Canadian economy and the tough choices required to revive it. Canadian officials remain perplexed by the cadaver. There has been no assurance from either the finance department or the Bank of Canada that a splurge of federal spending will do anything more for the health of the economy than increase the already huge federal debt and push inflation still higher. As Finance Minister Allan MacEachen admitted at Versailles, there is very little room for Canadian interest rates to fall. With U.S. inflation rates at 6.8 per cent and Canada’s still stuck at more than 11 per cent, any plunge in U.S. interest rates will not be mirrored across the border. If saving is to take place, interest rates must be kept above inflation by a healthy margin—and even Ottawa is not expecting a dramatic change in the nation’s inflation woes.

For Canada, the greatest irony of the summit may have been the surprising results of a poll published in a French magazine just as the leaders arrived in Paris. According to the poll, Americans, Europeans and Japanese had judged their Canadian counterparts the happiest people represented at Versailles and the people in which they have the most confidence. But faced with unem-

ployment at 10.2 per cent and the dollar worth less than 80 cents (U.S.), the Trudeau government is fully aware that it must effect some turnaround if it hopes to avoid the fate of the Bourbon kings. “I would say our determination to advance our national interests is the strongest I’ve seen,” MacGuigan declared bravely. But his words had an eerily empty ring. 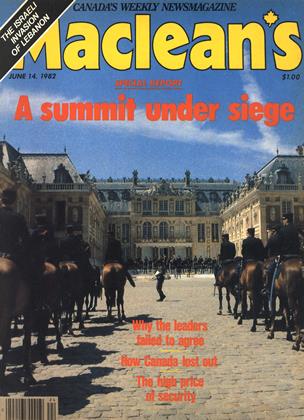