letting and a massive transfusion. During the final preview of Julius Caesar, Jack Medley, in the title role, was stabbed more thoroughly than expected by the conspirators and wound up in hospital with a punctured lung. Then, on opening night, the federal and Ontario governments, in response to artistic director John Hirsch’s insistent demands, proffered a combined donation of $618,000 toward this year’s estimated operating costs of $10 million. Meanwhile, onstage, The Mikado walked off with top honors over Caesar, The Merry Wives of Windsor and The Tempest.

Director and choreographer Brian Macdonald’s stunning version of the Gilbert and Sullivan classic demonstrates just how spectacular the results can be when Stratford’s immense resources are utilized with vision and intelligence. Visually, Mikado is unparalleled in recent festival history. Designers Susan Benson and Douglas McLean have rejected the large-scale sets for highly flexible units—huge orange banners, bamboo-supported podiums and an astounding lacquer box that unfolds to form the Mikado’s throne. Benson’s costumes recapitulate the history of Japanese design: propelled by Macdonald’s corps de ballet choreography, they create whirlpools of color on a stark, black backdrop.

With the twirl of a parasol, the show segues from Broadway musical to vaudeville to television sitcom without eclipsing the delicate set pieces littering Sullivan’s score. But this is no mere operetta. The Mikado is probably the closest Gilbert and Sullivan came to writing a black comedy—the absurd plot centres on Ko-Ko the Lord High Executioner’s orders to chop off a head in order to save his own, and, underneath the mountains of late-Victorian sugar and spice, the characters often stand revealed as people not so nice. When Katisha (Christina James) sweeps onstage, escorted by dragons, like a forlorn Valkyrie and vents her rage, the production glows with grand opera intensity.

Macdonald’s eagerness to take outrageous risks is totally exhilarating. Even though Richard McMillan’s Pooh-Bah and Gidon Saks’s Mikado at times mug themselves right off the stage, it’s a joy to see inventive comedians pushed to the limit. Eric Donkin’s timid and understated Ko-Ko provides a pleasing contrast with his one-liners on Trudeau and Rubik’s cube fanatics. Henry Ingram and Marie Baron as the lovestruck Nanki-Poo and Yum-Yum head an excellent singing cast, though the orchestra could have been livelier. So far, Macdonald’s fortes have been ballet and opera—what he might accomplish if let loose on Shakespeare should not be left to the imagination.

More vociferous pyrotechnics are on display in Julius Caesar with less felicitous results. Director Derek Goldby’s production is all flash and no flesh. The frenzied mob scenes narrowly escape contravening the riot act; the assassination (real blood or no) and final suicides verge on Grand Guignol. The breakneck pace ensures never a dull moment—and never a nuance either. But the blame for this disembowelment also falls on Len Cariou’s shuffling, overly heroic interpretation of Brutus, “the noblest Roman of them all.” Brutus is stoic when he should be epicurean, a complex figure whose emotions and rhetoric are tragically out of sync. But Cariou suggests none of this.

With a cardboard Brutus as a sparring partner, Nicholas Pennell’s naturally “lean and hungry look” can only take him so far in plumbing Cassius fully. But R.H. Thomson, as Antony—“a masker and a reveller”—has fashioned a living being with the colloquial elocution of a Vancouver Island beach bum. The entire cast is dragged down, however, by the mosaic blocks of suburban bathroom tile that designer John Pennoyer calls costumes and by Goldby’s glaring inability to incisively translate feeling and motivation into appropriate movement.

Not nearly so flamboyant is Robert Beard’s production of The Merry Wives of Windsor. Modestly ambitious, it achieves a modest success. The play is a mine of rich cameos, and the company shows remarkable depth in subtly shaping the comic features. R.H. Thomson’s throwaway style perfectly limns the daft suitor, Slender; Colin Fox’s Shallow is a model of judicial pomposity; Max Helpmann breathes life into Nym ex nihilo; and Richard Monette’s Doctor Caius is buffoonishly Gallic to his gallstones. The comic business is

solid and enjoyable, and the final gulling of Falstaff in the park hauntingly evokes the ritual exorcism and resurrection at the heart of comedy.

The prosperous Windsor burghers are less effective. Although Nicholas Pennell’s Ford is suitably jealous and peevish, he and the production as a whole suffer from a lack of social context. Underpinning Falstaffs impecunious lechery is a running commentary on the shifting relations between “gentle” folk such as Falstaff and the upwardly mobile middle class. Without this perspective the play is reduced to clowning. Most disappointing is Douglas Campbell, who ruins a masterful interpretation of Falstaff with self-indulgent diction, rendering the play’s best lines inaudible. More’s the pity, since his banter with Mistress Quickly (Amelia Hall) is warm and witty, his timing impeccable and his physical control a marvel.

As Campbell defaults on Falstaff, so does Cariou on Prospero. The magician in this Tempest, Hirsch’s first production at Stratford since 1976, has been conceived in rage but delivers only rant. This performance casts grave doubts on Cariou’s status as the company’s “leading man”: if Hirsch, Cariou’s selfacknowledged mentor, cannot guide him satisfactorily, nobody can. But Hirsch is at fault, too. Monotony keynotes all the performances, as if his repeated injunctions to make the text

clear have been misinterpreted as a plea for more volume and less complexity. Clarity of diction has obscured the very insights into freedom and responsibility Hirsch wants to illuminate. Sharry Flett’s Miranda, Lewis Gordon’s Gonzalo, Nicholas Pennell’s Stephano and Ian Deakin’s Ariel all, at times, allow the play’s essence to shine forth but they cannot reverse the bald literalness of Hirsch’s execution. Only when the actors speak softly does the downtrodden text spring to life and yield its truth.

The epidemic of sameness has infected designer Desmond Heeley’s palette as well, shrinking his color range to dull variations on clay. This uniformity tames the play’s vision, reduces the tension of opposites and deadens conflict. Heeley’s benevolent spirits are indistinguishable from his evil goblins: both are clad in gossamer, spangles and lace, and their movements are equally threatening— or benign. But for sheer spectacle, this Tempest is hard to match. The opening storm, sails and raging sea abillowing, is a

triumph. And the final masques represent the apex of the prop maker’s art.

The revival of spectacle at Stratford as a captivating theatrical mode is welcome. Without the physical and imaginative resources to exercise such an option, a festival of Stratford’s calibre is severely handicapped. But when it fails, spectacle is also more harshly criticized. Although Goldby’s Caesar does not provide much evidence that an insightful vision lies immured within, Hirsch’s Tempest does, and the disappointment is therefore keener. Perhaps offerings later in the season will go to the heart of their matter: one Mikado does not a summer make. 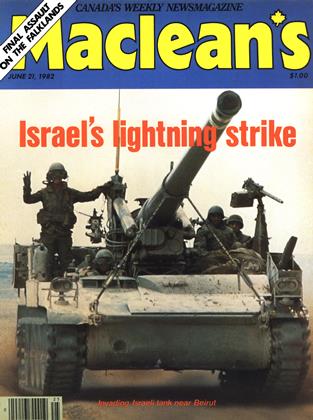