The grim joke in Ottawa last week was that the way to start a small business is to buy a big business —and wait. That black humor now epitomizes the dour Liberal mood as the cabinet enters a final debate over the government’s soon-to-be-announced economic recovery strategy. Ministers had managed to work out a program of selective stimulus designed to boost investor confidence. Then, some cabinet members renewed their drive to put more money into the package after the Versailles summit failed to produce any promise of an international recovery. And the subsequent argument has disrupted the work of a minority of powerful ministers who are trying to determine the precise tax changes needed to encourage investment. As a result, cabinet now must deal with inner squabbles, an impatient caucus and a plummeting economy as it tries to meet its end-ofJune deadline for a solid recovery program.

The root of the dispute lies in the size of the deficit, which has apparently shot beyond the $10.5-billion November budget estimate because of such “automatic stabilizers” as increased unemployment insurance payments. Some ministers, such as Employment’s Lloyd Axworthy,argue that an extra $1 billion would scarcely be noticed on top of the

already massive debt and that the money is needed for job creation. At the same time, a minority of powerful ministers, which includes Allan MacEachen in Finance and Don Johnston at the Treasury Board, counters that higher deficits mean higher inflation. They also insist that the government must not deliberately add to the burgeoning debt load if Ottawa is to send a signal of resolve to the investment community. Last week Prime Minister Pierre Trudeau apparently came down on the side of MacEachen—although his strong stand has not stopped the argument.

Meanwhile the cabinet is also preoccupied with the exact components of an economic rescue strategy. Under pressure from political veterans, the cabinet is on the verge of abandoning a scheme to replace the monthly family allowance cheque with a boost in the child tax credit. Instead, ministers are now debating a “national anti-inflation campaign” designed to reduce month-tomonth inflation to six per cent. Indexing of income tax and such social payments as the old age security cheque (but not the guaranteed income supplement for the needy) would also be tucked under the six-per-cent umbrella. The government would then launch a round of talks with business and labor in a bid to win acceptance for the plan.

And MPs would accept a pay freeze to dramatize their concern. But while the tactics apparently have the support of some powerful cabinet members—as well as Trudeau—they have been heavily criticized by other ministers and some senior bureaucrats.

At the same time, the remaining components of the package must be paid for by paring existing programs. The new plan will likely include modest interest rate assistance for farmers and homeowners, some job creation measures for the construction industry and a welter of solid tax changes that will reverse MacEachen’s disastrous November budget and add some innovative tax breaks. Cabinet is also considering major increases in capital cost allowances and novel schemes to encourage the purchase of Canadian stock. Foreign investment rules will be eased to allow more firms to escape scrutiny.

The prospect of change has temporarily quelled restless caucus members who generally favor higher deficits and who realize that uncertainty and delays in the recovery program are contributing to the current economic decline (page 46). During a marathon six-hour caucus last week, Trudeau lauded the Japanese insistence that all segments of society should share the burden of hard times. He also pointedly reminded the caucus that every MP must stay in Ottawa if the Commons sits throughout

July—otherwise the government could fall on an unexpected vote. Then the economic development subcommittee of caucus presented its independent reports, which largely sided with the hard-line MacEachen stand. The indepth studies and Trudeau’s appeal turned a potential revolt into a constructive session that considered such innovative subcommittee suggestions as allowing Canadians to use registered retirement savings plans without tax penalties for mortgage payments.

MacEachen’s package may still not be enough to bolster confidence. Allan Gregg, president of the authoritative Decima Research Ltd., says that the Liberals have massive credibility problems and that Canadians have become thoroughly skeptical. “They’re all from Missouri—they say, ‘Show me,’ ” says Gregg. “And that means that if the package isn’t enough to stimulate investor confidence, it won’t stimulate consumer confidence.” Gregg explains that satisfaction with the way the system is operating has plummeted to an unprecedented low, although Canadians still stubbornly believe that life will get better. “They’re not giving up on the system—they’re giving up on the people in charge of the system,” he contends.

For its part, the business community is adamant in its insistence that confidence will return only if the promised statement represents a substantial change in the federal investment approach. “If they just take a little step at it, they’re only going to make matters worse,” said Roy Phillips, president of the Canadian Manufacturers’ Association. John Bulloch, president of the Canadian Federation of Independent Business, adds that the package may not be totally effective until Trudeau changes the ministers and bureaucrats who were responsible for the November budget. “When someone picks your pocket and he says he’s sorry, you don’t have a long-term relationship of trust with the pickpocket,” declared Bulloch. “We’re still dealing with the pickpocket, from a psychological point of view.”

Bulloch’s message is not lost on most Liberals, who believe that the economy will not dramatically improve until MacEachen and some of the other key ministers and their officials change jobs. They also acknowledge that a new leader would probably improve their fortunes. Trudeau, however, shows no sign of quitting soon. But MacEachen is expected to make a dignified exit before autumn, leaving the post open for either Johnston or controversial Energy Minister Marc Lalonde. Until the shifts take place, the cabinet is staking its political future on the hope that it can convince businessmen that a new direction has successfully been established for new ministers to follow. ;£? 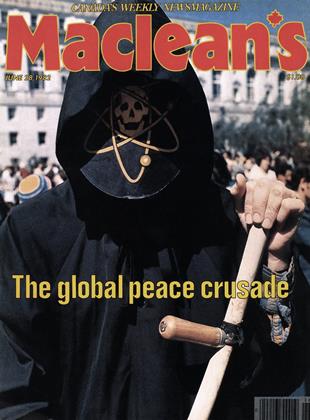