It was the election of Jean-Claude Parrot that sealed it. If there were any doubts about the commitment

of Canadian labor to its current militant posture, they were ended when the radical leader of the Canadian Union of Postal Workers (CIJPW) was voted a vicepresident of the Canadian Labour Congress (CLC) at its 14th biennial convention last week in Winnipeg. The surprise election ended a defiant week that began when 2,306 scrappy delegates voted a massive “no” to wage freezes

and cutbacks sought by recessionsqueezed employers and now common in the United States. In another spit-inthe-eye gesture to government, the convention agreed to stage a symbolic general strike if Ottawa decides to institute national wage controls.

The resolution took on added urgency last week as the Quebec government announced a three-month rollback of public sector salaries (page 16) and Newfoundland served notice that senior bureaucrats will be limited to five-percent wage increases—a plain warning to unionized lesser ranks to cool their demands. Snarled CLC President Dennis McDermott, re-elected unopposed for a second term to his $64,000-a-year job: “Cutting workers’ wages will not bring inflation under control... it will return us to the cannibalism of the ’30s and castrate the Canadian labor movement.”

lysts who thought that an ailing economy, high unemployment, widespread wage concessions by U.S. parent unions and the defections of more than 200,000 workers in the Canadian building trades unions from the CLC would result in a more conciliatory stance. On the convention floor, however, there was an air of paranoia and siege. Delegates were convinced that the federal government has already decided on the best cure for a sputtering economy: squeeze workers’ wages. Charged Bill Davidson,

a delegate from CUPE Local 402 in Surrey, B.C.: “B.C. has already decided on public sector restraint, and it’s kind of scary. They’re picking away at us one by one, and it looks like a losing battle with such high unemployment.” As a result, the scrappy convention called for the resignation of federal Treasury Board President Donald Johnston for what delegates viewed as his dishonesty in portraying workers as the primary cause of inflation. At the same time, Quebec Federation of Labour President Louis Laberge accused the Quebec government of burglarizing pay packets. “This government is not establishing wage controls,” he thundered. “It is stealing money that belongs to the workers. It is a bloody steal, and of course we will fight it.”

Although the convention agreed that workers should not give an inch on concessions, by week’s end the precise plan of attack remained unclear, much to the

frustration of some impatient delegates eager to man the trenches. Activists calling themselves “the open rank and file” urged delegates to adopt their own “preventive health care.” “No more excuses; let there be unanimous support for the immediate planning of a general strike,” exhorted their press release. “It’s no time to be timid. Let’s take the offensive.” It was a sentiment clearly shared by many at the convention and it resulted in the Parrot election. Said Lyle Whitbread, Saskatoon business agent for the Services Employees International Union, Local 333: “The left wing is getting stronger here all the time. I don’t like to say that but I do think we’re becoming more united. A general strike may be the only weapon we have.”

The hard-line talk did not please everyone. NDP Leader Ed Broadbent made it clear that his party will not support law-breaking tactics, including a general strike. (Provincial government workers have no right to strike in Nova Scotia, Ontario, Alberta and Prince Edward Island.) Others worry whether or not the pep-rally rhetoric of the convention can be engineered into a massive refusal to retreat among a union membership already harried by rising bills and falling employment prospects. The failure—by just 12 votes—of a resolution to require all union locals to belong to municipal labor councils and federations was not a good omen. Scuttled by federal and provincial civil servants, the resolution would have swollen the political war chests and membership of the local councils, increasing labor’s political clout. Said Wally Majesky, president of the Labour Council of Metropolitan Toronto: “We talk about what we’re going to do, but labor has an Achilles heel and this is it. The vehicle for a plan of action and a general strike is the local labor council. You can’t be partly in or partly out.”

A voice of caution was added by U.S. consumer advocate Ralph Nader in a speech in Winnipeg, delivered while the convention was in full throat. The North American labor movement is crumbling, he warned, and unions such as the United Auto Workers often have no choice but to accept freezes and rollbacks when faced with the threat of no jobs at all. “Whenever you have high unemployment, you weaken the bargaining power of unions,” he argued. Basking in the memory of 100,000 protesting union members gathered on Parliament Hill last November, Dennis McDermott is clearly betting that Canadian unions have more fighting spirit than their U.S. counterparts and that Nader is wrong. 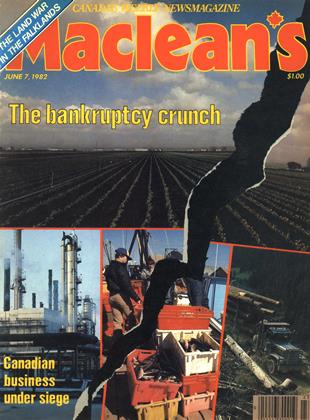