It was billed as his hour of political redemption. And Allan MacEachen appropriately pinned a red rose onto his banker’s blue lapel last week to read his new budget into the Commons record with a grim, artistic pride. In the end, the recitation pleased most of the Liberals but satisfied none of them— including the beleaguered MacEachen —because it was probably the first modern Canadian budget crafted not by the finance minister and his officials but by a powerful cabinet committee in consultation with the full cabinet and the Liberal caucus.

Although the document bears his name, the finance minister did not hammer out his budget details in traditional seclusion with his bureaucrats. His cabinet colleagues simply did not trust the finance department officials after their dismal performance in drafting the November budget. The new collegial arrangement meant that everyone—including MacEachen—was forced to make trade-offs to achieve a cabinet consensus. The result was a partial success—MacEachen managed to buy time, but he gained little of the vital long-term trust that he needed.

The core of the budget-making dilemma lies in the size of the deficit. MacEachen and such hard-line ministers as Treasury Board President Don Johnston were appalled at the projected 1982-’83 figure of $19.6 billion. Other colleagues on the priorities and planning committee argued, however, that more money was needed for j ob creation and other stimulative measures. Those ministers, such as Employment’s Lloyd Axworthy, were prepared to let the deficit rise even further. The cabinet battle raged for weeks. MacEachen scored only a partial win when it was agreed that all of the $2.3 billion saved by costcutting measures would be directed back into stimulative programs. He would have preferred to channel some money into combatting the deficit.

There were other sore points as well. For one thing, MacEachen had angered many of his cabinet colleagues by tinkering with such vital tax provisions as capital cost allowances in his November budget. And some hard-line cabinet members wanted the minister to reverse the changes. Those ministers were trapped, however, by their commitment to such stimulative measures as job creation, because it would cost an extra $1 billion in 1982-’83 to restore capital

cost allowances to their pre-November level. And that would have pushed the deficit beyond the psychological barrier of $20 billion. Moreover, sources say it was because of personal pride that MacEachen did not want to change every November provision. His refusal left the budget saddled with persistent irritants.

The budget arguments were disrupted by other long-running battles. Although Energy Minister Marc Lalonde accepted the limitations placed on the controversial National Energy Program, Trade Minister Herb Gray fought hard against key changes in the foreign investment review policy. Hard-liners wanted to suspend the agency’s activities or to remove some of the categories of transactions that are scrutinized. The cabinet was forced to compromise by merely changing the ceilings to allow more firms to escape scrutiny.

MacEachen was prodded into a compromise by Prime Minister Pierre Trudeau at a rancorous late-night cabinet committee meeting two weeks ago. The finance minister did not want to impose a six-per-cent ceiling on the annual indexing of income-tax deductions. He, two other ministers and the finance department wanted to introduce a complicated surtax because he had previously promised not to touch automatic indexing and because he viewed the surtax as a more honest approach. Trudeau apparently liked the “symmetry” of the six-per-cent package. Moreover, some cabinet ministers pointed out that if inflation drops to six per cent, no one will

be penalized by the ceiling. Trudeau ended the meeting with the pointed reminder that MacEachen “should take into account” the views of his colleagues. The minister swung into line before budget night.

The tug of war between ministers who wanted money for direct measures such as job creation and those who wanted to plunge funds into investment incentives was further complicated by the lack of room to manoeuvre. Ministers were armed with figures that showed that 23 cents out of each dollar spent goes to debt maintenance, 16 cents goes for government operations excluding defence and 20.5 cents is used for “payments to persons”—such items as family allowances. Once the ministers agreed to work within the deficit ceiling, their only real decisions were where and what to cut.

Finally, the cabinet agreed to put ceilings on family allowances and old age security payments—but most ministers balked at any further inroads into the social security system. Instead they combed through the government’s operations expenditures, paring existing programs to the bone. Despite inflexible NATO commitments, they even managed to slice about $200 million from the de-

fence budget. Government telecommunications equipment is being replaced with gadgets that are less sophisticated and less costly. Although the cost-cutting continues, the additional savings will likely be minimal (perhaps no more than $200 million) and they will be applied to the deficit.

The result was a budget that bears a community stamp—and that means that no one in the caucus or the party can complain openly. In the short term, MacEachen may be able to remain as finance minister through political astuteness. At last week’s regular caucus meeting, the minister was roundly applauded and congratulated. But then some MPs argued that pay cuts should be applied to their salaries only—and not to the tax-free expense portion. Johnston apparently intervened with the plea that parliamentarians must set an example. For his part, MacEachen did agree to consider requests that his blue-ribbon panel—which is due to report on investment incentive proposals by Sept. 30—should develop interim measures to stimulate investment. That would mean that incentives could be initiated this summer. The panel may also be asked to consider numerous other incentive measures, such as the eventual restoration of the sensitive capital cost allowances.

In the long run, however, the restoration of full investment confidence may only be achieved by MacEachen’s departure. Many Liberals concede that a new minister of finance would not be saddled with having to justify past mistakes, and he could simply revoke what remains of the November budget. They also say that a new minister, such as Johnston, would automatically inspire greater confidence because he would not be tarnished by his budget-making history. At the same time, MacEachen’s friends say that he is weary of the strain of finance and that he might welcome a portfolio shift. They say that he is also aware that any dramatic downturn in the U.S. economy could turn last week’s budget into an irrelevant document. Parliament is expected to adjourn in mid-July, and it is now highly likely that there will be a cabinet shuffle after the adjournment.

Meanwhile, party officials are scrambling to head off grassroots Ontario moves to put an embarrassing motion of confidence in Trudeau’s leadership on the agenda of the Liberals’ general meeting in November. They believe that if MacEachen is moved from finance, pressure to get rid of Trudeau may temporarily ease. But the weeks ahead promise little respite for the restless Liberals as they press MacEachen to make further budget adjustments and hope that he will agree to leave quietly. 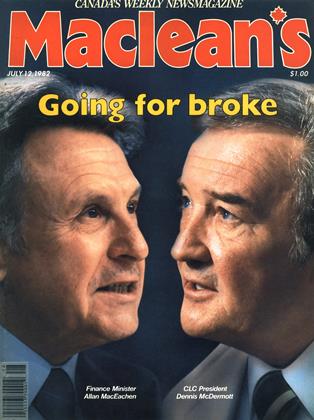