Every traveller to Europe packs them along with his camera and serviceable walking shoes. Sightseers in every tourist haven from Marseilles to Milan carry them. Michelin’s skinny green guidebooks, famed for their prodigious research and incisive, if somewhat characterless, prose, have charted European sights since the tire company first began producing the books at the turn of the century. Since then, the collection of 33 French and 17 English guides vertes has become ess-

ential for serious travellers. So prestigious are the Michelin stars, particularly in the guides rouges, which rate restaurants and hotels, legend holds that chefs julienne themselves when stripped of a star. Thus it was not without regional apprehension that many Canadians greeted the release of the first green guides for Canada (one in French and one in English) last month.

Six years in the making, the Canada guide is the biggest project ever undertaken by the company, according to Michel Carle, Canadian director of Michelin’s advertising department. At the time Michelin realized that Canada had the tourist market and the company had the local infrastructure to carry it out. Only the third North American effort after guides to New York City and the New England states, the book costs the same as most at $8.99 but covers far more territory.

Close to 30 individuals worked on the project which sent two anonymous research teams across the country as tourists and hired checkers to walk the 50-odd city plans and drive the eight 15-day road trips. Aimed 50-50 at the English-Canadian/American and the French-Canadian/European markets, the book is already into its second printing and is curiously enjoying an unanticipated surge in demand in French Canada.

Carle claims that a mere mention in the guide constitutes an honor, since only half the visited sights are covered.

Yet many hearts have been broken, most notably on the Prairies. Seven cities across the country have received the much ballyhooed triple stars meaning “worth the journey.” But Edmonton and Calgary warrant only two stars, according to Michelin researchers—only “worth the detour.” Comparing his town to a suicidal chef poised to stick his head in the oven, Edmonton Sun columnist Don Wanagas responds dryly, “We live in a measly two-star city.” Western acrimony is not likely to be mitigated by the fact that Calgary’s lone three-star attraction is its Stampede. “What can I say?” shrugs Carle. “Calgary’s not Venice.”

Winnipeg, apparently, is. The surprise three-star honor bestowed on the city, which ranks it, in Michelin’s terms, with the world’s best, has shocked just about everybody. In Edmonton John Learney, director of travel development

for the city, sniffs, “I guess you have to stop somewhere between Toronto and Vancouver.” Only Winnipeggers, weary of insisting that their city attracts more than snow and mosquitoes, were smugly unsurprised: “We’ve been telling our colleagues in Eastern Canada this for a while,” says Bob Bridge, director of marketing for Travel Manitoba. “If they don’t believe us, maybe they’ll believe Michelin.”

Despite the noses it has wrenched out of joint, the guide remains afascinating, and sometimes bizarre, account of Canadian life. Appealing most strongly to the researchers were such natural “viewpoints” as Niagara Falls and Quebec’s view from Mont. Ste. Anne of the village of Percé. By that standard British Columbia, the Rockies and the Yukon, one segment of the guide divisions, garnered the most triple stars in a guide whose most overworked words have to be “vast” and “empty.” Under the “Bugs, Bears and Poison Ivy” heading, travellers are warned of the “hordes of biting insects in the summers,” while the Canadian climate is predictably described as a “collection of extremes.” The French and English editions vary slightly but avoid reinforcing cultural bias. The English version, for example, gives more ink to Kleinburg, Ontario’s McMichael Gallery, while the French version dwells more extensively on the Quebec section.

Michelin considers no Canadian visit during the Stanley Cup season complete without attending a hockey game and, curiously, informs tourists to Toronto that shopping at Eaton’s and “its rival Simpsons” is an “essential part of life” for that city’s inhabitants. In the culinary interest category, New Brunswick’s fiddleheads and Newfoundland’s flipper pie washed down by “screech” earn honorable mention. And the section ends with a claim destined to make all hosers proud: “Canadians are great beer drinkers.”

Future editions will correct any errors that researchers failed to spot and may take into consideration the complaints of various travel and site administrators. However, Canadian hopes for a complementary restaurant-and-hotel red guide have already been dashed. The task of updating ratings in a country as large as Canada is apparently too awesome even for Michelin.

Meanwhile, Michelin is satisfied to steer newcomers to another three-star venue. Ottawa, which to some is merely a bureaucratic backwater, is, according to guide researchers, steeped in charm despite the “lack of imposing architecture, vistas and grandeur of other world capitals.” Rejoins a perplexed Allan Fotheringham, who has vented distaste for the city in the past: “Maybe they just left the minus off the three.” 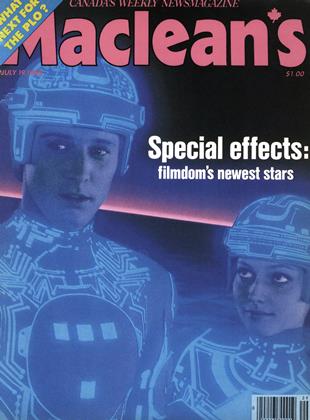