Alberta’s separatist Western Canada Concept party (WCC) pulled back from the edge of self-destruction last week. More than 800 angry members from across the province drove past summer fields checkered with swaying green barley and yellow canola into the south-central city of Red Deer to order that the party’s executives halt their infighting and bickering and start working toward taking power in the province—and, indeed, the entire West. Although the party’s three-day policy convention almost strangled on grassroots democracy by dissolving into procedural chaos in the early going, by the time it ended Saturday a fragile measure of unity had been restored. In the process, the party took a firm stand on independence after a referendum. And, with the spectre of a fall election, the WCC set the date for its final lunge toward legitimacy, calling a leadership convention for Aug. 21.

Many questions about the depth of the party’s support and the appeal of its policies remain unanswered. But its members, alienated from the mainstream of the traditional parties and stranded on the radical right, relished the chance to be politically involved. United in their opposition to eastern Canadian domination, big government and socialist tendencies in Canadian society, the delegates demonstrated a remarkable amount of resiliency, tenacity and dedication of purpose in the face of numerous obstacles at the convention. It was evident that the separatist movement in Alberta has put down roots.

“I’m really pleased. These people are making real progress,” observed Doug Christie, 36, the Victoria lawyer who founded the group in 1975 and who was kicked out of Alberta last fall by the WCC executive. Sitting in as a guest, Christie said: “It’s a miracle. At the beginning, I almost went ‘Oh, oh. Back to Square 1.’ But they rallied round. I

think the party is firmly established now. The membership cuts across so many lines.” Christie had just completed a controversial 11-day mission through Alberta trying to restore unity. “Everywhere we went, the members were angry about the fighting,” he said. “They told us, ‘We’ve got to get the party back on the rails.’ ”

The party derailed in early May when a behind-the-scenes rift on its independence stand, which, in turn, masked a deeper power struggle among the provincial executive, suddenly exploded into public view. The party divided into two camps. One was represented by WCC interim leader Gordon Kesler, who stunned the country with his election from the riding of Olds-Didsbury to the Alberta legislature in February. In the opposing camp was AÍ Maygard, the party’s former leader, ousted by the party’s board when the fight broke into the open. A messy, bitter struggle ensued. Maygard accused Kesler of straying from the party’s original intentions by playing down independence. Kesler accused Maygard of trying to disrupt and destroy the party by failing to heed the grassroots call for moderation on the road to separation.

Before long the mud was flying. Maygard charged that an influential group of Mormons, led by Kesler, was running the party. Since only six of the 24-member board were Mormons, Kesler replied that the charge was the vilest form of bigotry. “If you want to destroy a man, you attack his area of strongest value, his religion,” said Kesler. “That’s what they were trying to do.” In addition, three letters were sent to constituency executives by another WCC member that made a variety of accusations. One drew attention to the fact that some board members had criminal records (one for theft, another for drug trafficking), and a second letter unfairly implied that Kesler was having an affair with a board member.

Thus, the stage was set for a rancorous convention. But the members wanted no more plotting and scheming. “I came here to get this bloody show on the road,” said Harold Andrews, a weathered 47-year-old Innisfail farmer. “After the Olds-Didsbury byelection I was selling 30 memberships a week. Last month I sold two. As far as I’m concerned, if this thing doesn’t go, that’ll be the end of it.”

The convention wrangling started even before the chairman hammered the first gavel. Elmer Knutson, former leader of another separatist group, West-Fed, which had merged with the WCC after eventually throwing its support behind Kesler in the byelection, arrived at the convention to find his mem-

bership had been revoked—for the third time. Although granted “guest” status, Knutson refused to enter. Instead, he slouched around the halls and lounged in the foyer waiting for the membership to recall him. “I’m not going to compromise,” he said. “I’m the son of a pioneer. If I walk in, I’ll go in standing on my feet.” Six hours after Knutson arrived, his membership, along with four others revoked the previous year, was reinstated, after the crowd was reminded that the only other party in Canada that revokes memberships is the Communist party. Knutson entered with a standing ovation from half the audience.

That was one of the day’s high points. The meeting opened with a prayer led by a British Columbian Gitksan tribe member, James Stone, wearing a Blackfoot headdress. He implored the group to behave like eagles, but conceded, “It’s difficult to soar with eagles when you work with turkeys.” From there on, it seemed the convention was called to disorder. It began with a slippery move by the party’s board to amend the agenda with a series of five unspecified reports from the directors, which amounted to motions of censure against five party dissidents. But the enraged membership defeated the first motion noisily, and the remaining motions were quietly set aside.

From there the convention moved on to discuss the party’s finances. Many opposed the move, but the grassroots again opted for openness after it was noted that the WCC constitution required annual disclosure. It turned out that after taking in $126,000 in nine months, the party had $18,000 in the bank, including more than $2,000 in an Edmonton account created during the prepurge days.

Throughout the disclosures and wrangling, the delegates mired themselves in procedural arguments. A special chairman, Marcia Peters, an international director of Toastmasters’ International and a California resident who happened to be visiting Canada for the Calgary Stampede, was called in to provide unbiased direction. But even her patient efforts seemed of little help. Governed by Roberts’ Rules of Order, the delegates became embroiled in a morass of points of order, points of privilege, points of information and calls for question. The comic slowly turned into confusion, which rapidly twisted into undisguised frustration.

One delegate said he was offended by

people who don’t know the difference between a point of privilege and a pig’s ear. Another opined that it seemed that never in the history of a political party had so few delayed so many for so long. But participants bridled at one pundit’s suggestion that their democratic efforts resembled those of the New Democratic Party. Nonetheless, they persisted. “We’re new. A lot of these people haven’t been through this before,” Christie noted. “What you see at these microphones is that people should have power.” But by the end of the first day, some were asking what it meant. “A party that has trouble conducting its own business at a convention will have difficulty running a provincewide election campaign,” wrote Calgary Herald political columnist Geoff White. “And this convention has shown this party is nowhere near capable of forming a government—no matter how fervently its

Nevertheless, the fervency carried the day, and, by the end of the second day, the convention machinery had shifted out of first gear. In the process the conventioneers started making progress through a 19-page red binder filled with resolutions, policy statements and a revised constitution covering a range of topics, from independence and pollution-control measures to sponsoring the restoration of the lash and hanging as deterrents to criminals and giving western Canadians the “inalienable right to keep and bear arms.”

Through the interminable nitpicking, it seemed the only source of light relief was the tableful of hats, bumper stickers, pins, posters and mock postage stamps on sale outside the convention ballroom. One $7 brown-and-blue cap declared KEEP ALBERTA RAT FREE and showed rat-toothed caricatures of

Pierre Trudeau and Marc Lalonde. A green cap shouted COME WEST TRUDEAU beneath a solitary tree with an empty noose hanging from a limb. The $1 bumper stickers proclaimed FREE THE WEST and LET THE EAST HAVE TRUDEAU, LET THE WEST HAVE FREEDOM. And a $10 T-shirt showed a black widow spider crawling across a Canadian flag with a passage emblazoned OUR NATIONAL P.E.T.

Apart from the sloganeering, Kesler, in a welcoming address, warned delegates that they must be prepared to fight an international conspiracy. “We are at the crossroads of the future of mankind,” Kesler began. “We have reached that point in the history of the world where a small few wish to dictate every aspect of our lives—at their own fanciful whim.” And, he continued, “These forces who are working to destroy us are throughout the world and are in control of vast numbers of mega-corporations, banks, media and various union functions, as well as political movements. Their members or supporters are not just found in Russia, Europe, New York, Ottawa and Edmonton, but they are also found here in Red Deer—right here at this convention.” He later told reporters that the convention had been infiltrated by “agents” dedicated to destroying the party, blaming them for the iopening-day confusion at ¡the microphones.

Kesler drew parallels between the RCMP infiltration of the Parti Québécois and the turmoil in the WCC. Refusing to be more specific, Kesler declared: “These forces are working to destroy us throughout the world. We in the WCC are fighting a battle with incredible odds.”

Still, Kesler faces one more test. With a new, fresh board of directors and a semblance of unity, the leadership race holds the potential either to reopen the sores or heal the party completely. Having discovered that democracy is hard work, a weary membership departed for home knowing that in one month’s time, they would reconvene for another significant test, the selection of a leader who can guide the party as it develops, fuse its many interests and smooth over its raw edges.

Whether Kesler, or any of the other candidates now considering running for the leadership, can achieve those ends is a question currently being asked by every one of the party’s 10,000 members. 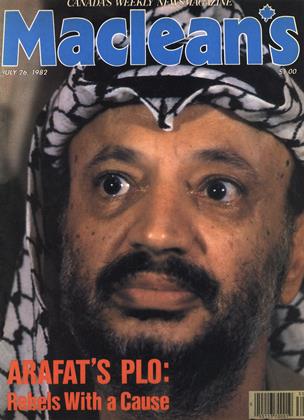