Last week Maclean’s canvassed a number of economists for their prescriptions for long-term economic recovery in advance of Monday’s budget. The response produced a range of policy options that mirrored the debates going on in the kitchens and boardrooms of the country. There did emerge, however, a surprising new willingness by many economists to accept the consequences of national wage and price controls as perhaps the only means of hoisting the economy out of its nose dive.

Roger economist Keane, with an the brokerage house Midland Doherty Ltd., belongs to a school of experts that believes that inflation can only be plowed into the ground with high interest rates that keep the supply of money tight. “If you weigh 300 lb. and you want to weigh 175, you’ve got to go on a severe

diet,” he argues. Keane and other monetarists express cautious support for the way that Canada and the United States have been imposing high interest rates. They claim to see a long-term victory against inflation.

But even the sternest monetarist concedes that the economy, for the time being at least, is in serious trouble. Yet they refuse to blame monetarism. They point instead to government “anti capital” strategies that frighten off investors—especially foreign ones. At the top of their hit list is the Foreign Investment Review Agency and the National Energy Program (NEP), both federal initiatives aimed at increasing Canadian ownership of the economy. Former Ontario treasurer Darcy McKeough, for one, told a western audience last week that the NEP was “equivalent to Argentina’s idealistic but ill-considered expedition to the Malvinas.” The monetarists also finger bulging government debt as an inflation-producing culprit, and they favor long-term civil service wage ceilings. “Without fiscal restraint, monetarism can’t work,” says McLeod Young Weir economist David Adamo.

But another group of economists pins

the blame for the current crisis solidly on high interest rates which inevitably produce monetarism’s ugly stepsisters, high unemployment and business failures. Some, such as Leo Panitch, Carleton University economist, argue that policymakers are deliberately keeping unemployment high in order to strip workers of their bargaining power. “It [high unemployment] is there to create fear in people,” he says. “If they’re afraid they’re going to lose their jobs, they won’t make demands,” Panitch concludes. While monetarists plead for more time for their medicine to take effect, other economists reply that they have already had ample time. “They’ve had as pure an experiment as you’re ever going to get in the real world,” says Allan Maslove, director of Ottawa’s School of Public Administration.

In fact, after roughly 18 months of crippling high interest rates, the economy has been badly mauled; the inflation rate stands at 11.8 per cent. And while anti monetarists concede that the high-interest-rate approach may slow inflation eventually, they insist that the price is too high—and that the burden is being unfairly borne by the 1.2 million unemployed. At the same time,

Laval University economist Pierre Fortin argues that high interest rates are not even a particularly effective means of controlling inflation. “You have to create a very high rate of unemployment to get meagre results,” he says.

The disillusionment with high interest rates has led to a new willingness among most economists to consider wage and price controls. Fortin, for his part, believes that inflation can be eased more effectively and less painfully through controls. For every oneper-cent drop in inflation caused by high interest rates, the result is $15 billion worth of unemployment, he says. And the same one-per-cent reduction in inflation can be achieved through controls with considerably less unemployment-costing as little as $100 million, Fortin contends.

A growing number of economists now believes that the solution may lie in dropping interest rates—which would ease unemployment—and imposing controls to stem inflation. Paul Weiler, former chairman of the B.C. Labour Relations Board, wants to see a tough income-control program that would limit increases to an average of four per cent —a far lower ceiling than the 10 per cent imposed by the Anti-Inflation Board in Canada from 1975 to 1978. Weiler argues that the program could monitor profit margins, dividends and professional incomes just as rigidly as wages and would have the effect of distributing the impact of the struggle against inflation more fairly, instead of concentrating it on those in the hardhit sectors. He believes singling out civil servants alone for wage controls is pure window dressing that has no impact on inflation. Maslove agrees: “Public-sector wage controls are at best a waste of time, at worst a fraud.”

John Helliwell, an economist at the University of British Columbia, has developed a computer model that suggests that the current tight money course of the federal government will produce a significant turnaround in two to three years. Sliding economic fortunes are clearly producing impatience with that timetable. 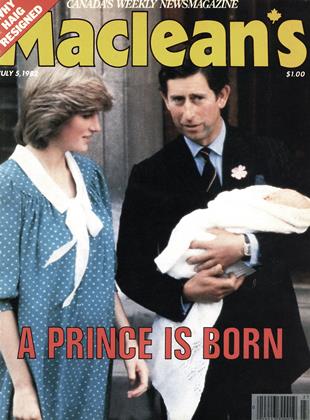