The atmosphere was more like a prizefight than the quieter intensity of a world swimming championship. Out from under the stands and into the glare of the arc lights strode the eight competitors, draped in their full-length capes. As they made their way around the lip of the Alberto Vallarino pool the crowd whipped itself into a frenzy of nationalism: union jacks, stars and stripes, hammer and sickles and maple leafs were hoisted aloft on makeshift flagpoles. The spectators were ready for what many expected to be a record time in the world swimming championship 200-m breaststroke.

The tall, broad-shouldered man in the colors of Canada was a little more active than the others. Answering the cries of his countrymen, he did a little Ali shuffle in the cool, equatorial night and stripped down to his trunks. As he approached the starting blocks in lane 4 he flailed his arms about, stuck his chest out like King Kong, and started to hyperventilate loudly. Later he would say, “I don’t care what my opponents think. If it frightens them or psyches them out, that’s all right. What it does for me is it gets me going.”

The centre of all the attention in Guayaquil, Ecuador, was the favorite, Victor Davis, a high school student from Waterloo, Ont. In the morning heats he had posted the best time. Four days earlier, in the 100-m breaststroke, he won a silver medal, losing out by just 0.07 seconds. His objective, to break one of swimming’s oldest world records, had been with him for months in preparation for this race. David Wilkie, of Great Britain, had swum the 200-m breaststroke in a time of 2:15.11 in the 1976 Montreal Olympics. The record was ripe for the cracking; the usual lifespan of swimming world records is measured in months, not years.

As the swimmers hit the water the field was even, and through the first two 50-m laps there was little to choose between the racers, although Davis was running fifth. It was in the third lap, as he approached the wall at the far end of the pool, that Davis began to make his move. As he kicked off the wall and headed for home he was a clear first by almost half a second. It was now the hardest kind of race: it was between Victor Davis and the clock. Davis quickened noticeably, his chest and head surging out of the water like the prow of a ship in a storm. His fingers met the touch pad in 2:14.77. His opponents arrived several seconds later.

A day later, in the considerable comfort of the Canadian headquarters at the Oro Verde Hotel, Davis was characteristically un-Canadian. “Winning is the most important thing in my life,” he said. “I don’t like to lose to someone I know I can beat. Right now I don’t think there is anyone in the world I can’t beat.” Victor Davis, world champion and world-record holder, has been several years in the making. He gave up soccer and football “a few years ago” to concentrate on swimming because “I was moving forward in it more easily than I was in other sports.” It has meant early mornings and more than five hours a day in the water with his coach, Clifford Barry, “who is responsible for more than 50 per cent of my success.” It has also meant channelling his psyche into several minutes of explosive effort two or three times a year.

“He is one tough customer,” said Canadian men’s head coach Dave Johnson, of Edmonton. “Victor understands. He knows the game and he knows the price you have to pay to win. Victor lives, eats, breathes and dies for swimming. That’s what he wants to do. He has had breaking the world record as a goal for a long time.”

Davis was not Canada’s only racing star of the fourth world championships. Another teenager, Anne Ottenbrite, won a bronze in the women’s 200-m breaststroke and a silver in the 100-m breaststroke. The 16-year-old Whitby, Ont., schoolgirl swam against a field that included several swimmers almost twice her size. Because of an awkward diving style off the blocks and a lack of strength for the turns, Ottenbrite actually had to outswim her opponents in the water to win her medals. With another year or two to perfect her technique and gain weight she could become the world beater Davis already is.

The success of Davis and Ottenbrite has helped to divert attention from the unexpected poor showing of Canadian swimming veterans, but Johnson and others recognized the problem. “I think it is evident that some of the old guard is on the way out,” he said. “The dynamics of swimming are such that you have to keep getting faster or move over. We need more people like Davis and Ottenbrite. One possible explanation for some of the performances of the others is that they missed the Moscow Olympics. That would have given them an idea of where they are and what is needed at the world level. They have not been in a situation where they have to blood-andguts it.”

In synchronized swimming Canada has no old guard. Its young team is obviously the class of the world. The superbly conditioned Kelly Kryzcka was a silver medalist in the solo event and joined another Calgarian, Sharon Hambrook, to win the gold in the duet. In the eight-woman team events the Canadian selection (four Quebeckers and four Albertans) were the first in both compulsory figures and the freestyle routine. To prepare themselves for the championships, they trained in the water for more than 1,000 hours and worked on weights as part of their dryland program.

To some of swimming’s purists, synchronized swimming has no place at the world championships (they have been included since the first meet in 1973), but that attitude was at variance with the Ecuadorian spectators who fell in love with the latter-day Canadian Esther Williamses. With theduetevent added to the 1984 Olympic program in Los Angeles (Canada’s Kryzcka and Hambrook are already the favorites), the sport’s future seems secure. The Soviet Union is expected to make its first major international appearance in synchronized swimming at the 1984 Games. Canada has competed against them once at a small meet in Spain. “They’re already quite good and they’re going to get better,” said Hambrook. “They should be in the medals too.”

The Canadian swimming team returns home from Ecuador for the national championships, which start Aug. 25, and next ventures abroad in October for the XII Commonwealth Games in Brisbane, Australia. With Canada’s other world-record holder (for the 200-m individual medley) Alex Baumann back in harness after a shoulder injury, it should be an interesting competition. The Australians kept many of their best swimmers at home from Ecuador to prepare for Brisbane.

Davis, for one, is ready. “The Australians are out to beat us. As champions from 1978 [in Edmonton], we have to beat them again.” For Davis there may be some extra incentive. His phys-ed mark from his final semester at Bluevale High School will be based on how he does there. On current form, Davis has an A-plus in the bag. 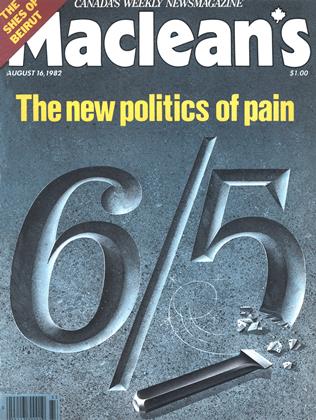