One of the joys of vacating this space for a spell, while I check in for my annual brain transplant, is the time available finally to run an eye over the contributions from my many fans. It makes a chap feel all gooey, warm inside, and brings a faint blush to the cheeks. There are so many nice people out there. Read on:

Douglas L. Hardtman writes from Kingston, Ont.: “Thanks to the profile in a recent issue of Today magazine, we know Allan MacEachen’s scholastic background — St. Francis Xavier, Massachusetts Institute of Technology. What would yours be—a BA from Onion College, an MA from Rochdale College and a PhD from Vitriol University? The trouble with your columns, my dear Fotheringham, is that all too often they give off the aroma of an unmuckedout horse barn—a barn piled with recently recycled oats.”

“Why do you continually print the garbage of low, ugly and ignorant insults shouting from Fotheringham’s small mind and big mouth? One more piece of garbage and you can stuff your magazine you know where. P.S. Is Fotheringham possibly of Irish extraction?”

R. Mingo Sweeney writes from Pictou, N.S.: “Fotheringham’s inverted snobbery becomes plain bad taste when he focuses on the monarchy. Such irrational behavior in the face of virtue can only have one cure: exorcism. However, if freed, where would the devils alight? Maybe we could put him in a sack with Willi Hamilton and throw it in the Bosporus. Byzantium had many commendable customs.”

Associate professor Vaughan Lyon writes from Trent University, Peterborough, Ont.: “Enough, enough, Allan Fotheringham. You have convinced me that all the politicians in Ottawa are blithering idiots, matter suitable only for your columns. Now, despite the inimitable style, you risk overkilling your subject and boring us. How about a

shift of perspective, Allan? Why is it that our political system produces leadership you find consistently ridiculous? Are the politicians laughably inept to start with, or does the system in which they work make them appear so? What reforms are needed?”

E.T. Thomas of Courtright, Ont., writes: “Allan Fotheringham should be thankful he lives in a country that inherited the British justice with its freedom of speech, religion and the written word. He is free to spit out venom whenever the British are mentioned.”

“The foolish, fat and fatuous Fotheringham. Does he not realize that the repatriation of the Constitution is only a gesture toward those Canadians who have no hereditary roots in the British Isles? Would he have those of us whose native tongue is English cut ourselves adrift from the source of our culture? Fotheringham’s egotism is so great he cannot bear to acknowledge his origins. He feels he must commit matricide to prove his independence. Why should the recognition of the symbol of our heritage be a subject for ridicule? We don’t all want to be bastards.”

Lisa E. Bolton writes from Ayr, Ont.: “I fail to understand Fotheringham’s dismal attempt at humor in The Lessons of Modern War (Maclean's, June 14). Surely the idea that a war, in this case the Falkland Islands war, can be “the greatest thing to happen to the world in a long time” has been proven historically incorrect by this time. Fotheringham has succeeded in passing off as writing a senseless scramble of

words, designed to arouse the reader’s wrath rather than instigate any serious thought. Surely Fotheringham does not believe that the informed public will swallow this kind of literary tripe for much longer?”

R.J. White writes from Sudbury, Ont.: “Mr. Blunderingham’s hospital vacation has only increased his 99-per-cent bile content. Why he should deign to remain in this ‘colonial’ country is beyond comprehension. So go—Blunderingham—go to Ghana, Uganda, Kenya, Sri Lanka, Zambia, Zimbabwe or even Hong Kong. I will not support such diatribe—cancel my subscription.”

A.J.S. Bates writes from Don Mills, Ont.: “I have always felt disgusted for anyone who makes a living as a triple B and find that the rot credited to Fotheringham in two recent issues places him, in my estimation, about 100 fathoms below tube worms. The Queen cannot fight back and would not if she could, but I can and hence I will not be renewing my subscription.”

Marjorie Peart writes gfrom St. Thomas, Ont.: 2“Maclean's must be hard Sup for material for its last 2 page to use the garbage that Allan Fotheringham turns out. His rubbish in the April 12 issue (TheSound of One Hand Clapping) should be enough to get him fired. I can’t understand how Maclean's can stoop to such low standards. Have you no respect for anything or anyone?”

Edward Britton writes from Bracebridge, Ont.: “Allan Fotheringham should not try to tackle serious subjects, such as the patriation of our Constitution. He has neither the sense of history nor depth of understanding to deal with issues of that importance. He doesn’t tell us anything significant about the West. Of course,‘significant’ and ‘meaningful’ aren’t words that spring to mind when thinking of Fotheringham.” Father B. Osborg writes from Hampton, N.S.: “I have just finished the rather disgraceful column by Fotheringham. I am wondering how he produces all the sound of one hand clapping. Does he smack his belly, his thigh, his bum, or just his forehead? Shalom in Domino.” 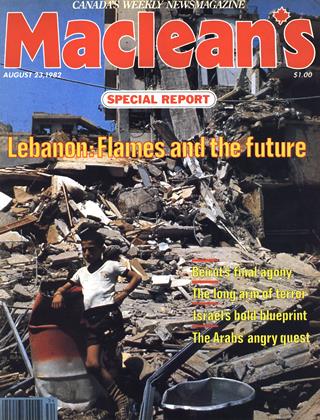