For years the tempo was relentlessly upbeat. Discoveries of huge oil reserves throughout the latter half of the 1970s had rocketed Mexico out of the Third World and onto a plane where it was being courted by some of the world’s wealthiest nations. Under the influence of President José López Portillo and the revenues from petroleum exports, the Latin American country pushed forward into an unprecedented era of expansion. Railroads were built, port facilities were enlarged. The annual economic growth rate of 1.7 per cent in 1976 climbed to a heady eight per cent between 1978 and 1981. In four years four million jobs were created. Halfway through his term of office in 1979, López Portillo proclaimed, “The outlook for our country is brilliant.” Three years later the brilliance has lost its lustre.

Last week marked culmination of one of the worst financial crises ever to hit Mexico. With

his country owing $80 billion and hemorrhaging from a severe drain on dollar reserves, Mexican Finance Minister Jesús Silva Herzog announced that the peso would be allowed to float. To offset panic selling, he also closed the country’s foreign exchange markets. But the move was of little avail. When the markets reopened last Thursday, the peso, which had sold at 26 to the U.S. dollar as recently as last February, plummeted to 120 to the dollar. Only those who could buy “preferred dollars” for vital imports, or for payment of interest on foreign debt at a rate of 49.50 pesos, were exempt from the disaster. Twelve million dollars estimated to be in private U.S.-dollar accounts became effectively frozen. Bank customers who wished to make withdrawals were issued pesos— at 69.50 to the dollar.

shock waves. Block-long lines snaked up to Mexico City’s main pawnshop as thousands of Mexicans tried to raise money as a hedge against the devalued peso. The international financial community was also worried. “Confidence in López Portillo’s financial team has completely evaporated,” said one European banker who requested anonymity. “After this they won’t see one dollar in the private banking system.”

Recognizing the extent of the damage, Mexican government officials have spent the past two weeks crisscrossing the globe seeking relief from governments and international banking agencies. Whether inspired by thoughts of a brighter Mexican future or—more likely—by the possibility of $80 billion in defaulted loans, governments and the banking community responded positively. The U.S. government, in two sep-

arate loans (half the total of which is advance payment for oil purchases), made available $2 billion. As well, Mexico will likely obtain $1.5 billion from the Bank for International Settlements, of which the Bank of Canada is a member. Last Friday the official team met in New York with the International Monetary Fund (IMF) and the U.S. Federal Reserve Board. Again, it was worth the effort. International bankers agreed to allow Mexico to delay repayment of $10 billion and promised to consider loaning an additional $1 billion. At the same time, optimism grew that the $4.5 billion which the team requested from the IMF would be forthcoming.

But whether the billion-dollar package will stop Mexico’s downtrend is far from clear. Mexico puts the blame for its decline on international shoulders. Herzog cites the high interest rates charged on money that the nation borrowed as well as the world oil glut. ¡“Nothing essential has happened to our economy,” said Rafael Refen-

diz, a spokesman for Herzog. “We are facing a liquidity problem and a cash problem.” Nevertheless, some of the fault lies on the home front. Mexico’s crusade for growth seems to have been more than the country could withstand. Any gain in industrial development has been offset by inflation. What’s more, up to 50 per cent of the population is out of work. Government subsidization of energy, social services and food has reached awesome proportions.

Mexico’s current economic plight is not without precedent. When López Portillo assumed the presidency in 1976, he inherited a country plagued by a collapsing currency, high unemployment and record inflation. It seems ironic that when López Portillo steps down in December, everything will be as it was. 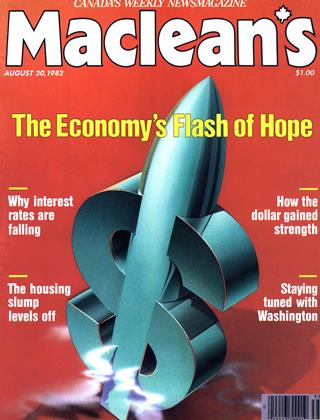