Even for the skeptical White House press corps, it seemed an impertinent question. On the eve of Indira Gandhi’s first state visit to the United States in 11 years, a hardened scribe was asking a state department briefer just why the Indian prime minister was coming to Washington. The official was nonplussed. “She’s coming because it’s here, I guess. It’s like climbing Mount Everest,” he replied.

But while Indo-U.S. relations have often been as difficult as scaling the Himalayan peak, Gandhi’s three-day visit to Washington last week seemed to suggest that the climbers had reached a plateau. For one thing, India has cooled its long-standing friendship with the Soviet Union somewhat. No Indian delegation was sent to Moscow last year to commemorate the 10th anniversary of the Indian-Soviet Friendship Treaty. And when Leonid Brezhnev was in New Delhi in 1980, Gandhi delivered a pointed lecture on the sins of the Soviet Communist Party.

At the same time, the 64-year-old prime minister has clearly signalled interest in easing tensions with Washington, both in direct letters to President Ronald Reagan and in taking diplomatic steps to improve relations with China and Pakistan—moves that the United States heartily endorses. Moreover, a major Indo-U.S. irritant— Washington’s refusal to sell additional fuel for the Tarapur nuclear reactor —was settled before Gandhi’s arrival.

The most compelling explanation for Gandhi’s visit, however, may have been

offered by former U.S. ambassador to New Delhi, Daniel P. Moynihan, now a Democratic senator from New York. He noted in The Washington Post last week that India has been overrun by waves of Central Asians. “The Mongols have once again appeared,” Moynihan wrote. “Russian armor is now in the Khyber Pass. Of necessity, the ruler of India is in Washington.”

This does not mean that all of Gandhi’s grievances have been settled. New Delhi is not amused by the Reagan administration’s apparently unshakable intention to sell one of the world’s most sophisticated fighter planes, the F-16, to its neighbor, Pakistan. Nor is it impressed by U.S. policy changes that make it more difficult for India to borrow money from the World Bank and other agencies.

Neither of these disputes seems likely to be settled soon. Washington insists that India has little to fear from the Pakistani air force. However, it is willing to consider supplying F-16s to India as well. As for World Bank loans, the Reagan administration contends that the Indian economy is strong enough to lure private foreign financing, leaving more development funds available for poorer Third World nations. As the state department conceded last week, there is only so much two leaders can accomplish in a few days. But it did hope to set a new tone. If tonal adjustment is all that emerges from the Gandhi visit, both Washington and New Delhi will count themselves satisfied. MICHAEL POSNER in Washington. 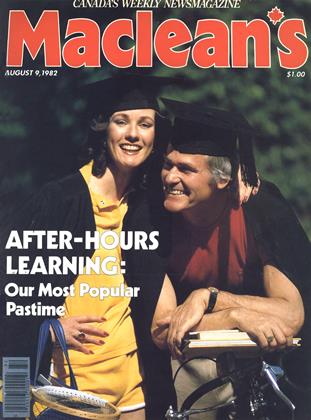