To the dark-suited bankers assembled in Toronto last week, Mexico was clearly not behaving as a desperate nation should. It was bad enough that in the past few years the country had gone on a spending binge that had left it $80 billion (U.S.) in debt. But Mexico also had the nerve to ask the International Monetary Fund for a $4.5billion emergency loan and then flout the organization by nationalizing private banks and imposing exchange controls—measures distinctly contrary to the fund’s policies.

At the Toronto meeting the IMF sent a clear signal of its disapproval by suspending $1.85 billion in emergency aid earmarked for the country. Still, Mexico showed no sign of relenting on its public determination to keep currency from leaving the country. Late last week customs officials in northern Mexican border towns were not even letting tortillas out. (Americans had been slipping across the border and stocking up on them with their valuable U.S. dollars.)

With Mexico poised on the brink of bankruptcy, the IMF is in a good position to extract concessions. But the country does have one trump card which is not lost on the astute bankers—if Mexico

declared bankruptcy, it might take a good part of the world banking system with it.

Mexico has emerged as the most profligate of the international spendthrifts, but it is certainly not alone. In fact, the growing debt burden of the Third World is shaping up to be one of the world’s most pressing global problems. Last week Argentina approached the IMF for $4.8 billion to help it with a $36-billion debt. And, in a dramatic move, Bolivia’s central bank announced that it was postponing a $10-million payment due on a syndicated loan of $460 million from foreign banks. Altogether, Third World countries have outstanding debts, mostly to private banks, of roughly $500 billion. With high interest rates forcing those countries to come up with $75 billion a year in interest payments alone, rumors circulated at the conference last week that as many as 20 developing nations face imminent financial collapse.

But Mexico’s financial dilemma is particularly

striking because the country is rich in national resources. Six years ago the sudden discovery of massive oil stocks seemed to thrust a silver spoon into Mexico’s mouth at a time when most other Third World nations were grappling with staggering energy costs and crippling inflation.

But, ironically, oil turned out to be a problem in itself. Like an overexuberant lottery winner, Mexico embarked on a spending spree in a desperate attempt to catapult itself into the developed world. With the vast Mexican reserves as a kind of collateral, private banks from around the world rushed forward to finance the binge at hefty interest rates. Flush with cash, Mexico expanded its bureaucracy, launched mega-projects that put millions to work and doubled its foreign debt in three years.

Then, last summer, the wanton spending began to run into trouble. A drop in world oil prices left Mexico suddenly short of cash. But, instead of cutting back, it had to keep borrowing in

an attempt to sustain growth and deal with its $13-billion current account deficit. Finally, a dramatic run on the peso in August prompted outgoing President José López Portillo to impose currency controls. Then, early this month, he nationalized domestic banks. Explaining his measures in an emotional speech, López Portillo blamed the financial disaster on banks and well-to-do Mexicans who had “looted” the country of more than $30 billion by stashing their money abroad.

But if Mexico’s spendthrift behavior had landed it in trouble, international bankers helped fuel the crisis by continually extending more credit.

Just how much the banks will suffer for their mistakes, however, remains unclear. Canadian banks alone have an estimated $5 billion at stake.

The financial crisis could have dramatic political implications. The situation is potentially volatile already. One of Mexico’s self-imposed austerity measures was to reduce subsidies on basic food items—a highly unpopular step in a country where the minimum wage amounts to an average monthly salary of $85. So far, however, Mexico has managed to gain the co-operation of labor and the left, which have been pleased by the bank nationalization and currency controls. Although manual workers are expected to lose 20 per cent of their buying power by Christmas because of inflation, the nation’s powerful labor leader, Fidel Velázquez, announced last week that he would give the government four months of freedom from pay demands. Mexico also appears anxious to head off dissatisfaction from

army. Despite the financial crisis, the government somehow came up with the funds earlier this month to quietly slip pension increases to its generals.

No matter how Mexico weathers the crisis, it already has lost some of its clout in its dealings with the United States. While anti-American sentiment traditionally runs deep in Mexico, a particularly raw nerve was touched last month when Mexico obtained two confidential U.S. state department memos that pointed enthusiastically to some of the advantages of the Mexican cri-

sis. Washington has been angered by Mexico’s support for Cuba and for El Salvadoran guerrillas and by its willingness to criticize U.S. support for right-wing dictatorships in Latin America. “With the wind out of its sails,” one of the memos said, “Mexico is less likely to be adventuresome in its foreign policy and less critical of ours.” But the most important change may be Mexico’s knuckling under to American oil demands. Washington wants its Latin American neighbor to sell it more oil, partly to limit the control of the Organization of Petroleum Exporting Countries on U.S. supplies. Mexico has resisted out of a desire not to squander its resources too quickly or grow too dependent on the market. But last month, in desperation, Mexico agreed to increase its exports to the United States

by 110,000 barrels a day to pay for a $1-billion emergency loan from Washington. The implica tions of the deal go beyond Mex ican-American relations. By adding more oil to the already flooded market, Mexico will only help drive the price of oil down. Comments Washington energy analyst Philip Verleger: "The Mexican situation is going to augur substantially lower oil prices for the rest of the decade." Even if an IMF loan can be worked out to get Mexico through its crisis, it will do little to change Mexico's fundamental development problems. Albert Berry, an economist at the Uni versity of Toronto, suggests that the whole development strategy used by such countries as Mexico and fostered by loans from pri

of poverty. For one thing, by spending heavily to improve transportation and communication systems, a country does little to benefit the rural and urban poor. Berry suggests that there might be more general benefit in using those funds to build up agriculture and small labor-intensive industries.

In fact, Mexico’s widely hailed boom years of the late 1970s and early 1980s have had little impact on the approximately 30 million Mexicans who are more or less permanently unemployed. Around Mexico City alone, several million squatters eke out a miserable existence in a no man’s land neither patrolled by police nor serviced by clean water. While bankers remain locked in negotiations over loans, more than 95 per cent of Mexicans do not earn enough money even to have a bank account.

pathway of Mexico City’s Alameda Park, 27-yearold Maria Hernández sat one afternoon last week beside her collection of coral jewelry, waiting for a tourist or businessman to stop and make a purchase. Asked her feelings about the banking crisis, she replied, “What’s a bank?” No matter what direction the current crisis takes, it is unlikely that she is ever going to find out. 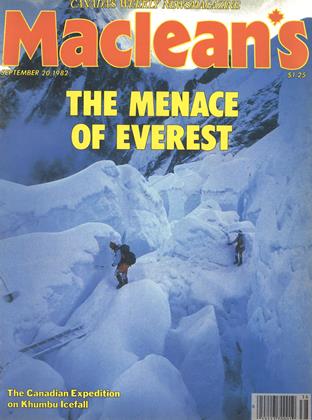