While professional sports in North America relentlessly followed their seasonal cycles this year, the rest of the world was bustling with 20 different global championships. Canada’s quest began when Gordon Singleton of Niagara Falls,

Ont., won a gold medal at the World Cycling Championships in Leicester, England. The journey ended with signs that Canada’s international athletes are making sure, if unspectacular, progress and that there will be favorable winds at the Commonwealth Games beginning next week in Brisbane, Australia.

Unfortunately, Singleton cannot compete there because he is a rarity—a Canadian professional cyclist.

Moreover, his win came in an event that is not raced at the amateurs-only Commonwealths: the Keirin, a kind of Rollerball on bicycles. Such bumping and banging in the turns of the steeply banked wooden tracks are disqualifying fouls in other races. But in the Keirin they are simply tactics. In a preliminary race, for example, the robust Singleton eliminated one rival with a well-timed butt of the head. In the final, where Singleton was not a favorite, he defeated an Australian and a Japanese competitor.

But it was a second Japanese rider who has had Singleton brooding for the past year. Koichi Nakano beat Singleton last year at the Munich world’s in the sprint final. Unlike the Kieren, the sprint is a cat-and-mouse race with two riders jockeying for position before a last-lap dash to the finish. Nakano is the powerhouse of professional sprinting, having dominated the world title for four years prior to Leicester. He is revered in Japan and reportedly has made millions of dollars in his rise as a sporting deity. But he saw the devil in Singleton.

After glaring matches between the two at the start of their brutal final, Singleton won the first race of a bestof-three series, but the victory was voided because the judges blamed Singleton for a collision. Nakano won the next race, and, in their third start, both

cyclists fell after colliding again. Singleton slammed into a TV camera stand and dislocated a shoulder. With Singleton unable to ride, Nakana was declared the winner, 2-0. Singleton felt that he was robbed and, no fan of officials, is considering retiring.

Amateur cyclist Jocelyn Lovell of Toronto, however, is not thinking of giving up, at least not until after Brisbane. Lovell is now 32 but a decade ago he held the world record for the one-kilometre time trial. He was still good enough in

Leicester to place seventh and earn early-favorite ranking for the Commonwealth gold. Similarly rated is Canada’s four-man pursuit team. Their seventh place at Leicester was the best result of the Commonwealth participants. Later, at the road events at Goodwood near the English Channel, the llth-place finish of the time trial team was also the best in the Commonwealth and Canada’s highest finish in the 20-year history of the world time trial. “We were up for this one,” said Bernie Willock, 24, of Victoria, B.C., the confident member of the four-man team. Willock is one of a new breed that emerged from this championship summer-athletes who believe they can beat the cycling powers of the Eastern Bloc.

While the cyclists experienced new confidence, similar upsets were in the making at the world rowing championships in Lucerne, Switzerland. At the previous world’s in Munich, East Germany and the Soviet Union won six of the eight men’s finals. This year, the East Germans won only three and the Soviets were shut out. Norway, Italy and Switzerland all won final heats before New Zealand handily beat the East Germans in the prestigious heavy eights.

“I don’t see any reason why Canada can’t win a Commonwealth gold and I feel confident that I can be in the boat that does it,” said Peter MacGowan, 23, of Toronto. MacGowan was basking in the glow of his fourth-place finish in the double sculls with Tim Storm, 26, of St. Catharines, Ont.—the best Canadian men’s result since Roger Jackson and George Hungerford won a gold in the coxless pairs at the 1964 Olympics. Lisa Roy, 22, also reflected the new cando spirit. “The East Germans don’t look as big as last year,” said the 130-lb. Vancouver rower, who faced 170-lb. East Germans. Roy had just teamed with Janice Mason of Victoria, another 22-year-old, to win a surprise bronze medal in the double sculls. (The Soviet Union won the gold and East Germany, the silver.) Veterans Betty Craig of Brockville, Ont., and Tricia Smith of Vancouver also won a bronze, as ex-

pected, and that helped to confirm Western ascendancy. While the Soviet Union and East Germany still ranked one-two in women’s results at this year’s world’s, Canada climbed over Great Britain from seventh to sixth.

As the Commonwealth team members head for Brisbane, they are optimistic, exceeding even the buoyancy of the team that went to the 1978 games in Edmonton. Canadian pugilists may lead the way. The boxers finished first overall in 1978 and once again they are touted as the team to beat. With fighters entered in nine of the 11 events, the team predicts that it will bring back nine medals, including the heavyweight gold (see following story). The wrestling team also finished first in Edmonton, taking nine medals, and could take 10 in Australia.

While the men’s basketball team took a dive in South America at the world championships, the Canadians on the tower and springboards in Brisbane should do better. Silvie Bernier, 18, of Quebec City is the best medal hope after a seventh at the world’s in the threemetre event. The other medal hopefuls include Victor Davis, 18, of Waterloo, Ont., the 200-m world record holder who took the 200-m gold and 100-m silver breaststroke at the world’s this summer; and Alex Baumann, 18, of Sudbury, Ont., the world record holder in the 200-m individual medley, and Anne Ottenbrite, 16, of Whitby, Ont., the Commonwealth record holder in both the 100-m and 200-m breaststroke. In 1978 the swimmers won 15 golds.

Kathleen Millar, technical director of the archery team, predicts a gold for Roger Lemay of Montreal and a silver for Linda Kazienko, 26, of Ancaster, Ont. And the badminton team, silver medalists at Edmonton, could be in the medals race.

At'the QE II Centre track and field stadium Canadian supporters will be cheering on Toronto sprinter, Angella Taylor. The 23-year-old has recaptured her 1980 form and she is, once again, virtually unbeatable. Taylor came first in the 200 m and second in the 100 m at a late-August meet in Brussels. Canadian decathlon champion Dave Steen, 22, of Toronto, will almost certainly win a medal, if not a gold.

As confident as the Canadians are, they remain candid. As with the Olympics, the host nation is allowed to add an event. The Australians have chosen lawn bowling. A Canadian official, who understandably wishes to remain anonymous, offered a prognosis on the bowling team’s chances: “To say that a Canadian medal on the greens is unlikely would be to put it kindly.” The bowlers can only hope that the rest of the team keeps rolling along.

With Ann MacGregor in Toronto. 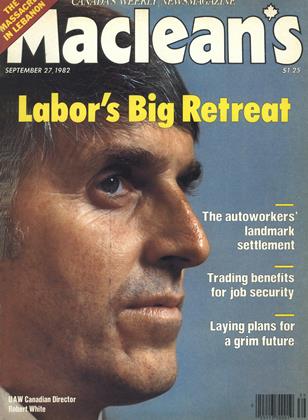