From their cloistered refuge in the town of Rougemont, in the heart of Quebec’s Eastern Townships, the Pilgrims of St. Michael implore divine providence by slogan and placard to CONVERT OUR FAMILIES, CAST COMMUNISM OUT OF THE COUNTRY, PROVIDE A DIVIDEND FOR ALL, ABOLISH ALL TAXES. The Pilgrims, popularly known as the White Berets, are graphic proof that the Roman Catholic Church, in its drift away from orthodoxy, is not taking all its members with it. The movement, perhaps the most extreme of several conservative cults within the Quebec church, banded together in the late 1950s when the Union des Electeurs, a strict Social Credit movement, split into two warring factions. On one side were Réal Caouette and the Ralliement des Créditistes, seeking political power; on the other, Gilberte Côté-Mercier, “an irrepressible religious seer,” as Maurice Duplessis biographer Conrad Black describes her, and her Pilgrims, seeking to create the “Catholic City.”

The White Berets list “offices” in Toronto, Winnipeg, Edmonton and Vancouver. But the 80 full-time Pilgrims sequestered in Rougemont, in two fortresses complete with turrets and flags, are the core of this colorful and bizarre politico-religious cult. Observing a life of relentless sobriety, they play host once a month to as many as 500 other believers bused in from Northern Ontario, New Brunswick, Maine and as far away as Tennessee. The visitors come to hear mass in Latin, courtesy of traditionalist Oblate priests from a monastery in nearby Richelieu.

Women Pilgrims wear their hair short and their dark-brown

dresses long, almost to the ankles. The men, in their berets and rumpled dark-grey suits, with religious medallions prominently displayed, talk purposefully to each other in loud voices that betray a not too distant rural past.

The Pilgrims value their privacy, and strangers are shooed away from the Rougemont refuge. From nearby St-Eugène, Rougemont’s former parish priest, Rich-

ard Côté, who endured their humorless presence for several years, will only allow, “Let’s say I don’t miss them.” But that is more than anyone else in the area will say about the Pilgrims. Quebec sociologist Gilles Bibeau calls them “paranoid” in their attempt to recreate a simple agrarian life and authoritarian family structure. Côté-Mercier, he says,

wants to turn the whole of Quebec into a giant convent.

But in Quebec and elsewhere these days there are far more powerful manifestations of Catholic orthodoxy than the White Berets. There is Marriage Encounter (ME), an evangelical movement imported from Spain. In Quebec some 100,000 couples (about 10 per cent of the married population) have undergone ME’s “blessed 44 hours,” an intense weekend conversion experience which has been criticized in a report prepared by the archdiocese of Montreal as physically and psychologically abusive. And there is Cursillo (Spanish for “small course”), another Iberian import, with 50,000 adherents in Quebec, three million worldwide. Founded by former Franco officers and soldiers after the Civil War to unite Spain, the movement preaches an intense form of Christocentric piety. In the inspirational words of the founders, the purpose of Cursillo is “total conversion to Christ... to contemplate the Lord and to ask His help in taking the step of heroic decision to give all in the service of Christ.”

Now, yet another Spanish evangelical movement, known as Neo-Cathechumena, is incubating in Quebec. Devotees spend as long as six years years undergoing a methodical conversion experience to finally “renounce false idols.” Steeped in mysticism, obscurantism and renouncement, cathechumens become “itinerants” bringing the Good News to distant lands. The movement is closely modelled on the Church of Corinth, in which the disciple Paul preached the same doctrine to the poor

The progressive Catholic New Times finds it “striking that many of the movements on the Catholic right take hold first in Quebec and then work their way into other parts of Canada.” But the province is still in a state of “shock from the . . . rapid desecularization of the past two decades,” the biweekly goes on to explain. So, while the Catholic Church and its membership are experimenting with liberalism nationally, Quebec is becoming a breeding ground for reactionaries and traditionalists. 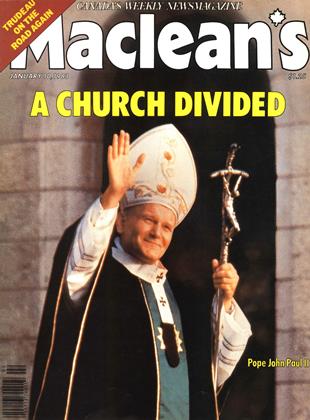