It is midwinter, and, inevitably, people are blaming the flu for almost every pain, ache, sneeze, sniffle, chill, cough and temperature elevation. Across the country there are high rates of absenteeism and overworked hospital emergency departments. Even though by last week the situation seemed to have stabilized, already some influenza experts are worrying about what might happen next year or in 1985, when another major worldwide flu outbreak is expected.

This year’s version of the flu—mostly the A Bangkok strain (the other two milder strains are A Brazilian and B Singapore)—was first isolated in Alaska in late October and then in British Columbia in November. Its misery then travelled eastward. Health officials say it seems to have peaked during the Christmas holidays, though the traditional flu season can last well into April. Dr. Alastair Clayton, head of the Laboratory Centre for Disease Control (LCDC) in Ottawa, estimates that by next week the worst will have passed.

British Columbia and Quebec appear to be the hardest-hit provinces. Dr. Timothy Johnstone, director of epidemiology with the B.C. ministry of health, reports that absenteeism in West Coast schools reached 20 to 30 per

cent in November and December. Says Dr. Donald Kettyls, chief of virology services with the province’s health ministry: “We have an ‘influenza-watch’ program involving the medical health offices and a group of ‘sentinel’ physicians who monitor patients in their practices. When they see diseases like influenza occurring, they submit specimens to our labs.” He adds, however, that his staff was fairly sure, even before seeing lab results, that they were dealing with the flu because of the classic way in which it appeared in the community. The illness has a short in-

cubation period and causes high absenteeism rates. “When that happens at this time of the year,” says Kettyls, “there is only one infectious disease to look for—influenza.”

In Montreal Dr. Louis Geoffroy, head of St. Justine’s Hospital’s emergency medicine department, says: “Normally, we see around 5,000 children in December. This year we treated about 8,000. About 75 per cent of them had flu symptoms.” Complaints included headaches, muscle aches and a racking cough, along with vomiting and diarrhea.

Flu-related illnesses tend to spread first among children, according to Dr. Stan Acres, chief of the communicable diseases division at LCDC. Transmission occurs when an infected person expels the virus by coughing or sneezing. Acres

suspects that the high incidence in children is due to crowded classroom conditions and slipshod personal hygiene habits.

By mid-January positive confirmations of genuine flu victims from across Canada numbered 224, compared to 214 by April, 1982, and 689 during the winter before. “That doesn’t seem much, considering our population,” says Acres. He points out, however, that physicians cannot do more for most patients than advise bed rest and plenty of liquids. When symptoms grow extreme, doctors might prescribe antibiotics. As a result, it is seldom necessary to have a specimen cultured and positively identified as influenza. “The only thing new this year,” says LCDC’s Clayton, “is that the outbreaks of flu seem all to have happened at about the same time.” Although few flu cases are life-threatening, doctors urge the chronically ill, the elderly and those suffering from diseases that suppress the body’s immunity systems to have yearly precautionary flu vaccines. What Clayton fears, as do physicians in the United States, is that the A Bangkok strain, which is always mutating, is due for one of its 10to 15year “shifts” into a more virulent form. The world would then be open to a mutant micro-organism that could sweep through the unprotected population. (The worst z worldwide outbreak, or 3 pandemic, of influenza, § in 1918-19, killed 20 milä lion people, about 50,000 * of them in Canada.) “I take it? predict,” says Clayton,

“that this shift will happen in the next two or three years.” Although he stresses that a new shift would not produce anything approaching the severity of the 1918-19 pandemic, he admits that Canada and the United States are not prepared. He points to the bitter memories many people still carry of the disastrous swine flu immunization of 1976. Only a few cases of potentially deadly swine flu were reported that year, but 532 North Americans who had been vaccinated then came down with a paralytic disorder called the Guillan-Barré syndrome. “When the time comes—and it will—we will have the proper vaccine,” predicts Clayton. “But will anybody take it?” 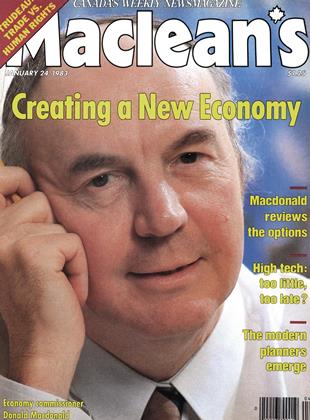