When Stanley Burke resigned as anchorman of CBC TV’s late evening national news 14 years ago, he explained that he had decided to involve himself personally with one of the day’s major news events: the Nigerian civil war. Now 60, Burke does not regret leaving television. He thinks that North American networks have settled complacently into a slick, welldone format that he would not want to be a part of. Instead, Burke looks ahead to what he believes will be the next stage in the development of television: two-way communication electronically connecting viewers.

Burke says that he became “virtually unemployable” as a journalist when he took his openly pro-Biafra stance in the Nigerian civil war. Burke had first visited Nigeria in 1966 as a CBC foreign correspondent and he became convinced that Nigeria should grant independence to Biafra, its oil-rich eastern region, which was not a popular position to take at a time when separatism was threatening Canada itself. Still, Burke spent a year organizing peace conferences for Biafrans, who ultimately lost the war. His views remain pungent and likely to provoke Canadian nationalists, especially his belief that this country is an artificial union that may not exist much longer. Said Burke: “For us to have put all our national energy into a new constitution at a time when the world is in the midst of an electronic revolution is madness. No one can say what is going to happen more than six months ahead.”

Burke himself is riding out this hurricane of change on a spacious houseboat anchored in Vancouver’s fashionable False Creek. He has also returned to journalism, ironically to the nonelectronic medium as publisher of the thrice-weekly community newspaper in Nanaimo, The Times. Burke is currently working on a book about the electronic dispensing of information. He also has a passionate interest in tall ships and is a member of a seven-person group trying to raise $3 million to buy a bark, a three-masted sailing ship on which to train young people in outdoor survival. Says Burke: “We are in the midst of an electronics revolution, but the old values learned in training to sail one of these ships—courage, discipline and teamwork—are useful for survival.” 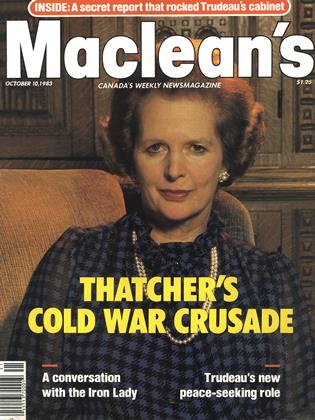