The gift was painstakingly crafted and carefully packaged—but nobody wanted it. Still, no one in Ottawa was eager to point out that fact to Prime Minister Pierre Trudeau, Opposition Leader Brian Mulroney and New Democratic Party Leader Ed Broadbent last week when they finally agreed on an all-party resolution supporting the extension of Frenchlanguage services in Manitoba. NDP Premier Howard Pawley was given Ottawa’s help in his efforts to make the province officially bilingual, whether he wanted it or not. The premier, who made it clear last month that he prefers to seek a “made in Manitoba” solution, greeted the parliamentary resolution with polite resignation. And his cabinet issued a curt statement calling the federal action “useful.”

The all-party resolution is a masterpiece of conciliatory language, but it still runs the risk of inflaming the already tense situation in Manitoba. Since May, when Pawley’s government announced its plan to entrench the increased use of French in Manitoba in the nation’s Constitution, the province has become deeply divided. A large segment of the population, supported in the legislature by the 23 Conservative MLAs, adamantly opposes the government’s proposal. The issue will not come to a vote until the provincial legislature resumes sitting, sometime before the end of the year. But the dispute already has raised the prospect of a bitter FrenchEnglish showdown. And last week’s federal resolution appears to have intensi-

fied the conflict. Declared Manitoba Conservative Leader Sterling Lyon, “Entrenchment [of francophone rights] is dividing the province as it has never been divided before.”

It took three weeks of delicate negotiations and careful drafting to come up with a resolution that all three federal leaders could accept. They finally agreed to “invite” the Manitoba government to “act as expeditiously as possible” to extend the range of Frenchlanguage services which it provides. That skilful wording allowed Trudeau to carry on his crusade for expanded bilingualism, while still respecting Pawley’s right to speak for Manitoba. It permitted Mulroney to endorse the principle of bilingualism, while avoiding an outright collision with his party’s unhappy Manitoba wing. And it offered Broadbent a chance to state his support for Canada’s second language without committing his provincial NDP colleagues to any specific course of action.

All three leaders strove to praise the all-party accord with inspirational phrases. Hailing the beginning of “a new period of understanding” among Canadians, Trudeau reminded the country: “It is fundamental to our existence as a people and indeed to our survival as a nation that we say, no matter how small the minority, that if it has rights, those rights will be protected.” Added Mulroney: “Bilingualism is a valued principle and an indispensable dimension of our national life.” Concluding the debate, Broadbent declared: “We

are supporting a spirit of tolerance and a respect for diversity which will always be the hallmarks of Canada and Canadians.” But behind their glowing oratory there was a fascinating interplay of less noble political calculations. For Mulroney, the resolution represented a huge relief. When the Prime Minister first suggested the accord, during the Conservative leader’s second day in Parliament, Mulroney found himself in an intensely uncomfortable position. It appeared that he would have to choose between two untenable options—that of supporting the resolution and alienating Manitoba Conservatives or rejecting it and turning his back on Quebec. Last week’s formula spared Mulroney the anguish of that choice. Although the resolution

neither satisfied Quebec nationalists, nor pleased Manitoba Tories, both groups were prepared to live with it. Even Lyon pointed out that Mulroney’s position was hardly the first time the federal and provincial wings of a party had disagreed.

Mulroney was also spared the embarrassment of a public split within his own caucus in Ottawa when Parliament agreed not to put the resolution to a vote. That meant that any dissent could remain submerged. Several of Mulroney’s right-wing MPs strongly opposed the resolution, but they remained silent while their leader told the House: “We stand before you united.”

Trudeau emerged a winner, too. When he originally broached the possibility of an all-party resolution on Sept. 13, critics accused him of exploiting the language issue merely to trap Mulroney. Those charges cast doubt on the sincerity of Trudeau’s concern for the country’s francophone minority. By publicly agreeing with Mulroney, Trudeau was able to restore his stature as a defender of bilingualism. And even Broadbent shared in the success. He established his party as a serious and important participant in the language debate.

The resolution is not binding on the Manitoba government. But it does promise to heighten passions in the troubled province. And it is certain to focus the nation’s interest, once more, on a provincial government that hopes to work out its problems quietly. 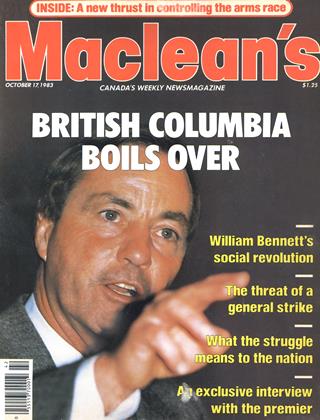