David Barrett, British Columbia’s NDP Opposition Leader, is in no mood for apologies. Two weeks ago, the 23-year veteran of Victoria politics and a former premier was dragged bodily from the legislature and banished for the rest of the session following a confrontation with the acting Speaker. Then, last week, after two days of lengthy meetings aimed at formulating a motion to reinstate Barrett, Social Credit House Leader Garde Gardom said that Barrett must apologize in order to take his seat again. Barrett refused. “There is absolutely nothing I will apologize for,” he declared. “They want a pound of flesh when it is not due and there is no way I am going to apologize.” With that declaration, Barrett— who plans to retire from his seat in the spring—may never sit in the House again.

Barrett’s absence from the legislature last week made little difference to the proceedings, and the Socreds continued their “legislation by exhaustion” tactics to push through their controversial 26-bill restraint budget. On Wednesday, after 21-hours of debate, 54 recorded votes and a record 10 closure motions, the government finally forced clause-by-clause passage of one of its most contentious bills—the Public Sector Restraint Act—which will allow the government to fire public servants. Said NDP MLA Gordon Hanson after the draining debate: “It is a black day for British Columbia and labor relations. The government has rolled industrial relations in the public sector back to where they were in the 1950s.”

With that major legislation passed, the Socreds adjourned for a four-day annual convention at the Hotel Vancou-

ver. For Socreds, the convention was both a coronation of Premier William Bennett and a victory celebration for the May election win. But the meeting was a rallying point for thousands of protesters who angrily marched outside, demonstrating against Bennett’s tough cutbacks.

Restraint was also the main topic of discussion among 1,000 delegates. It was evident in the modest lunch selection of fish and chips and beer. Even the closing dinner—usually a lavish fivecourse feast—was transformed into a restrained buffet. As Bennett was piped in to open the convention, he received a standing ovation from the delegates. It was his second of the week. Three days earlier, in a speech to the Business Council on National Issues in Toronto, Bennett tried to draw a rosy investment picture of the province with the most troubled labor relations in Canada. But it was his hard-hitting conservative message that drew 150 of Canada’s captains of industry to their feet. In a similar rousing speech to the Socred convention he lashed out at the NDP and the Liberals. “The polls show that the people of this country do not want the easy answers of the left,” he said.

Although Bennett was overwhelmingly lauded by convention delegates, there were concerns that some of his program cuts may be too severe. Still, delegates soundly defeated a resolution to reinstitute the office of the rentalsman, which oversaw rent increases and was dismantled in the budget. As the Socreds have already shown in Victoria, they will not tolerate any opposition to their programs—not even from within the ranks. 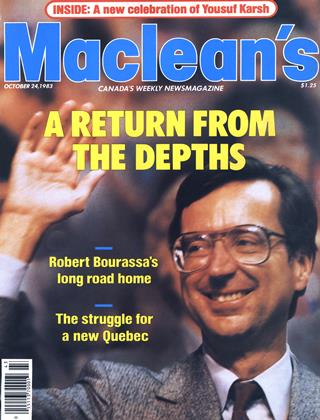