Among all the recent revelations about cancer, none is more thought-provoking than a growing body of research that suggests that viruses may be associated with about five per cent of human cancers. Viruses, formed from tiny protein-clad clusters of RNA or DNA that cause a range of less serious infections, now appear to affect cell genes and promote conditions—if carcinogens are present—that could allow cancer growth.

Research evidence already points to viruses as the possible factor in cancers of the blood, cervix, skin, central nervous system, lymph glands, liver, prostate, vulva, nose and throat. Among common viruses regarded as promoters of cancer: herpes simplex 2, hepatitis B, Epstein Barr virus (which causes mononucleosis) and the virus responsible for genital warts. Research into the role that viruses play in cancer now commands more than $2.1 million in Can-

The biological chain of events in which roving viruses pirate healthy growth genes from normal animal cells and invade other cells, causing them to grow uncontrollably as cancer, remains largely mysterious. Apparent inconsistencies puzzle scientists: a virus that appears to cause Burkitt’s lymphoma, a lymph tissue tumor in Africans, appears to play no part in an identical cancer in American blacks.

Those inconsistencies have led scientists to explore the possibility that environment profoundly influences links between cancer and viruses. A dramatic illustration of that connection emerged in 1978 when Dr. Robert Gallo, chief of the Washington, D.C., Laboratory of Tumor Cell Biology at the National Cancer Institute, announced the discovery of human leukemia virus (HTLV) in T-cell leukemia patients. Gallo subsequently announced that he and colleagues had found that the virus is endemic to some areas in southern Japan and the Caribbean basin and is rare in North America. As well, Gallo’s recent research suggests that blood transfusions and prolonged intimate contact may transmit the virus.

The role of infectious viruses such as herpes in the creation of cervical cancer, which affects an estimated two per cent of North American women, is also the subject of intense study. Clinical studies last year by Dr. Alex Ferenczy, a professor of pathology, obstetrics and gynecology at McGill University in Montreal, showed that nine per cent of women studied who had developed genital warts caused by the highly contagious human papilloma virus (HPV) developed a preliminary stage of cancer on the cervical skin.

Despite the implications of viral research, however, Dr. Roger Hand, director of the McGill Cancer Centre, said that most scientists believe that viruses do not play a major role in human cancer. And, while researchers like Gallo have announced plans to develop vaccines against T-cell and liver cancers, Gallo admits that mass inoculations may be years away and are still too risky until he and his colleagues understand the role of viruses better. 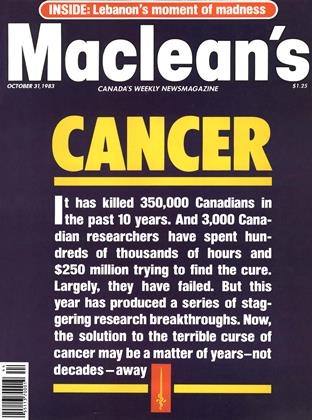