When Canadian government officials first charged that U.S.-based Amway Corp. had perpetrated a massive fraud against Can-

ada Customs, the directsales soap king fought back with an almost religious zeal. Advertisements proclaiming the company’s innocence flooded North American newspapers, Amway accused Canada of trying to start a trade war with the United States and the firm’s two owners declared that they would never face the Canadian courts because they would be denied a fair trial. But last Thursday that stance underwent a dramatic reversal when Amway’s Toronto lawyer, David Humphrey, appeared before the Supreme Court of Ontario and entered Amway’s guilty plea. Calling the admission a “deathbed confession of guilt,” the court’s chief justice, Gregory Evans, fined Amway $25 million, the largest sum that a Canadian court has ever levied and one of the heaviest criminal penalties ever imposed against any corporation in the world.

For a company that prides itself on patriotism (the firm’s name is short for the “American way”), free enterprise and advanced positive thinking, the evidence assembled for last week’s trial was an embarrassing revelation.

during a 15-year period by creating low “fictitious prices” for exports to its Canadian subsidiary which enabled it dramatically—and illegally—to reduce the duties and taxes paid when the goods crossed the border. In reply to Humphrey’s claim that Amway’s owners, Richard DeVos and Jay Van Andel, are

Amway, which started as a basement soap-selling company in 1959, has made

Van Andel and DeVos into two of the wealthiest men in the United States. They are the sole owners of a $1.2-billion firm, located in Ada, Mich., which offers its 300-odd products in 40 countries and territories. The home product firm claims to have attracted some 750,000 independent distributors of its products, mostly

It was a move by DeVos and Van Andel to consolidate their control over Amway in 1965 that started the activities that led to last week’s conviction. Until that time Amway was two companies—a distribution and sales arm, which the two partners completely controlled, and a manufacturing firm. In 1965 Van Andel and DeVos bought out the manufacturing operation and merged it with the sales company into a single corporation. But that created problems for Amway’s exports to Canada. Until 1965, border duties and taxes were based on the prices the manufacturing firm charged for the goods it sold to the sales operation. The arrangement satisfied the stipulation of Canada Customs that duties be based on an “arm’s length” selling price. But when the ownership distinction between the two operations disappeared, customs began making its assess-

ments using the higher prices of goods that Amway charged its distributors. The new method meant higher tariff and tax costs for Amway. But attempts at appealing the new customs assessment were unsuccessful, and the company soon turned to illegal means. Private warehouses in the United

States were the unwitting vehicle for the plan. Amway had long used the warehouses to store goods until independent distributors picked them up. But in March, 1965, Amway decided to adopt a policy of deceiving the Canadian government into believing that Amway sold products to the warehouses, which, in turn, resold the goods to distributors. Although the warehouses never did purchase anything from Amway—indeed, they billed the firm for storage services—the soap company began creating fictitious invoices for merchandise shipped out to them. Amway then presented the phoney invoices— which undervalued the merchandise— to Canadian officials. As well, the company even drew up bogus price lists for inspection by Canada Customs. The savings for Amway were considerable: one false invoice showed a shipment of detergent valued at $1,279.60 (U.S.) when in fact it was worth $5,048.82. The deception, in turn, allowed Amway to cut the tariffs and taxes due by a whopping 82 per cent.

Concerns about the system apparently began to build following the visit to Ada of S.A. Bokhari, a Canada Customs official. Bokhari arrived at Amway’s headquarters in November, 1975, after Amway had failed to fulfil his requests for invoices and price lists. But Bokhari was unsuccessful. C. Dale Discher, Amway’s treasurer, told him that the company was still compiling the information he had asked for and that the employee assigned to the task was off work that day. Bokhari returned to Ottawa empty-handed and did not receive the material until several weeks later. But the Canadian official’s arrival at Amway headquarters set off alarm bells. As an Amway employee noted in a memo to Van Andel shortly after the visit: “The danger . . . lies in the fact that the ‘dummy’ invoices are not actually proof of an ‘arm’s-length transaction.’ They are evidence of only ‘half’ a transaction. A sharp auditor could request proof that the invoices were actually paid by the contract warehouses. No such proof exists.”

In 1978 Amway decided that it would ep1ace the invoice system with a ne~ ;cheme using a dummy corporation tc e based in Hawaii called the Hawaii Distribution Corp. (HDC). Amwa~ 1aimed that its role was to buy gooth rom Amway for resale to independeni listributors on the island state. In real. •ty, however, the company only gener. ited invoices and cheques showing sales t the same fictitious prices charged tc mway Canada for its imports. Amwa~ :ook a series of complex measures tc )bscure the fact that Amway whol1~ )wned HDC and to give the impressior ;hat the Hawaiian warehouse was ar .ndependent enterprise.

DeVos (top) and Van Andel: ‘they were not respectable corporate directors’

But the HDC scheme came too late. Just as Amway was planning it, the fraud was slowly falling apart. In January, 1978, Robert Wallace, supervisor of Amway’s tax department, confessed to an employee of Border Brokers Ltd.— Amway’s Canadian customs brokers— that “all of the facts presented to the Ottawa customs people were fraudulent.” Since that was the first time they had ever heard of the fraud, the company quietly began checking into Wallace’s claim. In May another crack appeared. When Arthur Andersen & Co. of Montreal took over Amway of Canada’s accounting business, it soon uncovered the phoney invoices and price lists. Andersen urged Amway to be honest with the Canadian government. But, instead of revealing the truth, Amway went ahead with the HDC project. Again, Andersen and Border Brokers issued warnings.

By early 1979 the scam began to unravel rapidly. First came the January resignation of Arthur Andersen as Amway’s auditors. It resigned when Van Andel cut back its access to Amway Canada’s financial statements and prevented it from discussing the possible consequences of the phoney invoice scheme with the company’s outside lawyers. Next to go was Edward Engle, Amway’s chief financial officer and executive vice-president. He left when his attempts to put an end to HDC and set up a confession meeting with the Canadian government failed. Finally, at the beginning of February, Border Brokers dropped their trade with Amway and informed the department of national revenue about Amway’s activities. That action, in turn, set off the RCMP’s investigation, which resulted in last week’s conviction.

Despite the investigators’ best efforts, no one will ever know how much the fraud cost Canada in total. Customs routinely disposed of forms relating to the first nine years of the crime. But the documents from the last six years alone reveal that Amway cheated the country’s coffers of $28.7 million.

For its part, Amway blames the actions of its executives on poor advice from their lawyers. The government announced last week that it is dropping separate charges against DeVos, Van Andel and two other executives. That means there is no danger of the firm’s founders spending time in jail. But the massive fine against the corporation will essentially come out of their pockets, since they are Amway’s only owners. What is more, four civil cases seeking an additional $147.8 million in fines and duties will still go ahead. As Evans commented last week: “I suppose when you gamble and the stakes are high, you’re going to win big. [But] if you lose—you lose.” 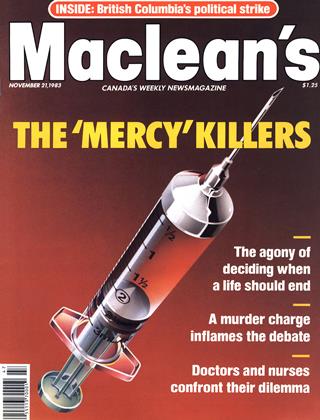