When the Ontario Supreme Court handed down its decision last week declaring the antistrike and anticollective bargaining provisions of the Ontario government’s Inflation Restraint Act unconstitutional, the Ontario Public Service Employees Union (OPSEU) swiftly announced a victory rally. But its plans to pack Toronto’s Roy Thomson Hall on Nov. 12 with 2,600 jubilant government employees from across the province may be premature. Said Ontario Attorney General Roy McMurtry: “[The decision] creates doubts about the validity [of such legislation] not only in Ontario statutes but in those of other legislatures in Canada.”

Indeed, by week’s end both British Columbia and Alberta public employee unions had instructed their lawyers to file constitutional challenges against government curbs on their right to strike and to bargain collectively. Said British Columbia Federation of Labour President Arthur Kube, who is directing the court challenge against sections of the sweeping new B.C. Public Sector Restraint Act: “The Ontario decision gives us grounds to be very, very hopeful.” The Supreme Court handed down its decision more than a year after the Ontario government enacted its restraint program as part of Ottawa’s Six-andFive program. The act included clauses restricting bargaining on nonmonetary issues by public service unions and it removed the right to strike from about 19,000 employees. The new restrictions expanded existing provisions to cover employees whose jobs are in any way paid for out of provincial government funds. Included in that group are about 12,000 community college teachers and employees at such institutions as the Royal Ontario Museum and the Ontario College of Art. But, said Mr. Justice Dennis O’Leary in the court’s 2 to 1 decision,“ The denial of the right to bargain and strike over noncompensation matters cannot be justified as being reasonably necessary to control wage increases.” And Mr. Justice Elmer Smith concluded that, “The freedom to association . .. includes the freedom to organize, bargain collectively and, as a necessary corollary, to strike.”

The decision is the first major ruling on the freedom of association guaranteed in the Canadian Charter of Rights and Freedoms. As well, said Toronto lawyer Ethan Poskanzer, who helped prepare the OPSEU case, it was the “first decision that labor law rights are constitutinally based, not just statutory.” If the decision survives McMurtry’s

planned appeal, it will now be difficult, Poskanzer said, for provincial governments to justify ad hoc rules concerning employees whose jobs are no different from those of other workers not affected. For one thing, in Ontario beer store employees have the right to strike while provincial liquor board employees do not. Said Smith: “There is no presumption that the state is reasonable” in deciding which rights may be curtailed out of necessity. It is conceivable that even police, firefighters and hospital workers, who in most provinces are forbidden to strike, could gain new rights.

Unions in Alberta, Nova Scotia and Prince Edward Island—the only other provinces that exercise blanket prohibitions against the right of provincial employees to strike—have already seized on the Ontario decision as ammunition for their causes. Declared John Booth, president of the Alberta Union of Public Employees: “We can see the light at the end of the tunnel.” Although the Alberta union has already sought remedies to strike restraints before the International Labor Organization, it has now asked its lawyers to seek a constitutional challenge on Alberta’s bills 41 and 44 which deny provincial employees the right to strike. According to John Fryer, president of the National Union of Provincial Government Employees, Public Service Alliance of Canada members who work for the federal government could now tackle the clauses of the Six-and-Five legislation introduced in July, 1982. And in British Columbia, the B.C. Federation of Labour responded swiftly last Friday by filing a court action based on the Charter against that province’s tough new Public Sector Restraint Act, which allows the government to fire provincial employees without proving just cause.

In Ontario, Treasurer Larry Grossman announced last week that he may introduce a “more relaxed” program offering a limited return to collective bargaining as early as this week. “The new legislation is significantly different precisely because it seeks to retain the right of unions to bargain freely and collectively,” said Grossman. Still, OPSEU President Sean O’Flynn claims that he will proceed with plans to ask the government to reopen all negotiations affected by the Ontario act. As well, he said, OPSEU will be applying for a judicial review of a recent arbitration that used the act to deny similar rights to roughly 10,000 to 15,000 “unclassified” temporary or seasonal public service workers. Although O’Flynn is heralding “a new era for labor in Canada,” McMurtry offered a cautionary note: “These cases mark the beginning of the interpretation of freedom of association under the Charter and not the last word.” -ANN WALMSLEY in Toronto. 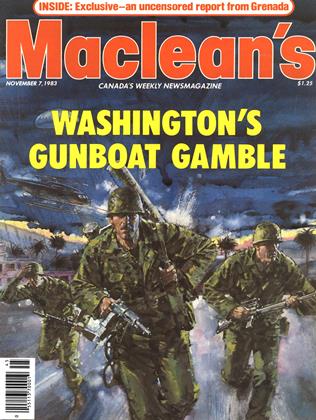