A watchdog with no bite WILLIAM LOWTHER December 12 1983

From the start, Rita Lavelle was an unlikely candidate for the difficult task of stopping industry from dumping toxic chemicals into the environment and making companies clean up the deadly mess that already exists. Her major qualification for employment by the U.S. government was that she had worked on President Ronald Reagan’s election campaign in California. Indeed, most of her experience has been gained in helping the very companies that, in her position as a senior administrator in the federal Environmental Protection Agency (EPA), she was responsible for policing. As a result, Congress insisted at the time of her appointment that Lavelle disqualify herself from any case involving her former employer, Aerojet-General Corp., a California-based aerospace and defence products company. She did not, and last week a U.S. district court jury in Washington found her guilty of perjury and obstructing a congressional inquiry into her management of the EPA’s $1.6-billion program to clean up hazardous waste sites. She will be sentenced on Jan. 9 and faces up to 20 years in prison.

There was suspicion from the beginning that Lavelle, now 36, might turn out to be an environmentalist’s nightmare—a watchdog without teeth. The case against her emerged amid an enormous scandal that rocked the EPA earlier this year. Twenty-one top officials, including administrator Anne Burford, resigned after allegations of perjury, conflict of interest and political manipulation. But only Lavelle faced criminal charges. The prosecution established that when Lavelle discovered that her former employer was under investigation, she did not disqualify herself from the case but, rather, called AerojetGeneral officials to warn them. As well, Lavelle denied under oath to a congressional committee that she knew Aerojet was being investigated.

The EPA shakeup has particular relevance to Canada because, just before the scandal broke in February, 1983, the agency took a strong position against ordering effective action to curb U.S. industries’ contribution to the acid rain problem. Now, with the Reagan administration’s environmental program in disgrace, it is possible that a new team may feel under pressure to take up the campaign against acid rain soon. WILLIAM LOWTHER in Washington. 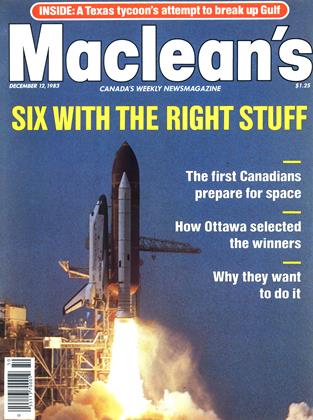