Fourteen months ago police found the charred remains of six vacationing campers, in Wells Gray Provincial Park in British Columbia’s rugged Interior. Then, last week the RCMP finally made an arrest. Officers charged David William Shearing, 24, of Clearwater, B.C., 110 km north of Kamloops, with the second-degree murder of Edith and George Bentley, their daughter, Jacqueline Johnson, her husband, Robert, and two children, Janet and Karen. After one of the most extensive—and expensive—manhunts in Canadian history, police found the suspect living less than two kilometres from the place where investigators believe the families had been camping on the night of their deaths.

Shearing’s arrest brought some relief to the 2,000 residents of Clearwater. But it also raised a troubling issue: why did it take police more than a year to make an arrest? As well, many people in the area also suspect that the crime, which involved moving six bodies and burning a car and a camper, may have involved more than one killer. Police say that they plan no further arrests but they have not ruled out the possibility.

Investigators followed more than 12,000 leads but concentrated for a year on finding the Bentleys’ red-and-silver Ford camper. They believed that whoever committed the murders had escaped in it. Several people told police that they had seen two French Canadians in the area driving a vehicle similar

to the Bentleys’. Reports of sightings in almost every province led police to speculate that the killer or killers had fled east. Police drove a camper identical to the Bentleys’ across the country as far as Val d’Or, Que., hoping for more leads. But in October it was clear that the costly search had been in vain. Two provincial forestry workers discovered the camper in a densely overgrown ravine— just 3.2 km from where police had found the bodies of the Bentleys and Johnsons.

Following the discovery of the burned-out camper, the RCMP assigned 25 officers to the case. In co-ordination with local police, they began a second house-to-house search, this time asking if anyone had left the area in the past year or changed his or her appearance. Shearing left Clearwater during the summer to look for work in the coalmining area near Tumbler Ridge in northeastern British Columbia. On Nov. 19 he was arrested in Dawson Creek.

Shearing’s arrest was the main topic of conversation in Clearwater last week as residents recalled the boy they had grown up with. Shearing has lived in the area all his life. An avid hiker and hunter, he had worked in Wells Gray Provincial Park clearing trails. Said his mother, Rose Shearing: “He was a good boy. I hope the police have made a mistake.” At week’s end, Shearing was remanded in custody until Dec. 1. He entered no plea. 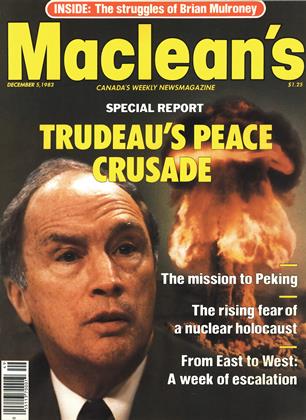