Michael Kirby’s “deep corrective surgery” for the Atlantic fishery already has at least one unwilling patient. When the 3,500 residents of Burin, a town scattered loosely along the rugged, rocky shore of southern Newfoundland’s Burin Peninsula, were told that the town’s fish plant and only employer would be shut down permanently in three months, they applied emergency measures of their own—a strike. The strike has not merely closed the 40-year-old fish plant even earlier than planned but has also left nine company-owned draggers tied up at the wharf and idled 505 plant workers and 126 crewmen. The confrontation is one between two worlds—the corporate boardroom in St. John’s and an old, proud fishing town. It is the kind of dispute that Kirby acknowledged to be inevitable last week when he proposed that numbers of fish plants would have to close.

The closing of the Burin plant was announced last November by Fishery Products Ltd. The aim was to streamline operations by transferring production to the company’s modern 15year-old plant at Marystown, 15 km away. Burin plant workers who did not get jobs in Marystown would be absorbed elsewhere, and Burin sailors would go on manning the company vessels, delivering their catch to other plants. But in Burin, where fish packing is as much an emotional as an economic issue, townspeople were shocked at what they perceived as the “death of our community.” In late December they set up a 24-hour picket line which has kept the Burin plant idle and has insured that the company fleet cannot sail away.“We knew once the draggers left they weren’t coming back to Burin anymore,” says Mayor Lou Bailey, head of the Burin Action Committee, which started the protest. “The difficulty is that we cannot get other towns to realize that they’re in almost as bad a position as Burin and to tie up their boats, too.” The latest chapter in the blockade took place last week when two tractor trailers pulled into the plant yard to load fish. A crowd of townspeople swiftly gathered at the gates, loudly discussing what to do. That

answer came with a growl as the town’s backhoe pulled up and started looking for a leaking water main and, in the process, dug a 1.2-m-deep trench across the plant entrance. A great pity, Mayor Bailey told two RCMP officers summoned by the company, but a poor little town like Burin could not afford to pay the overtime to fill in the trench on the weekend. While the backhoe was doing its work, council reinforced its decision by declaring a state of emergency, under which large trucks are not permitted on town streets.

For most Burin workers, the daily drive to Marystown is not the issue. Rather, according to Bailey, the fight is about a “mismanaged, bankrupt” firm. He argues that the owners should not be allowed to end the town’s centuries-old economic self-sufficiency and independence to fit a corporate model master plan—especially since the firm has had $34 million from the Canada Development Corp. already and last November asked for more. “The plant has made money all its life. It just doesn’t make sense to close it down,” says Bailey.

The charges irritate Fishery Products President Gus Etchegary, who insists: “Don’t say this company is destroying a community. That’s false. All we’re trying to do is insure that that community is going to have more stability and security and employment. A 10minute drive to work is nothing.” Etchegary says that the Burin plant, although one of the most productive in Newfoundland, is losing money and would cost $10 million to renovate. “Marystown is only running at 55 percent of capacity,” he adds, “so we would be bloody irresponsible not to do this. And Burin is only an example of what the Canadian industry will have to face.”

Etchegary has refused to open his books to confirm that the plant is losing money, a move that Bailey acknowledges would mollify the protesters. Meanwhile, the town awaits government responses to the action committee’s “blueprint” for nationalizing the industry—a scheme that might help towns like Burin.

But, in fact, in the history of Newfoundland’s fishery there are no other towns like Burin—the father of the modern fishery. Basque fishing fleets frequented it as early as the 16th century, but when the current plant was built in 1942 it was a revolution in the business—Newfoundland’s first frozenfish plant. Furthermore, modern deepsea fishing trawlers first sailed from Burin in the 1960s. “Right now we’re hopeful that government isn’t going to ignore us,” says Bailey. “If they do, I don’t know what we will do but, by God, someone’s going to have a tough time with us.” 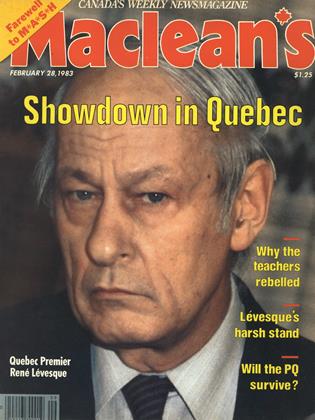