Back on the street again John Hay February 7 1983

The Criminal Code provision against offering sex for sale is plain and deceptively simple. The single sentence of Section 195.1 declares, “Every person who solicits any person in a public place for the purpose of prostitution is guilty of an offence punishable on summary conviction.” But in a series of controversial court judgments since Parliament passed the section 11 years ago, the seemingly straightforward law has been rendered almost unenforceable.

As a result, angry municipal politicians in cities from Halifax to Vancouver have busily passed bylaws of their own against the resilient profession. Calgary’s city council adopted one such antiprostitution ordinance in June,

1981. But last week, in a key test case, the Supreme Court of Canada struck down the Calgary bylaw as an invasion of federal jurisdiction. The judgment caused as much disappointment in the federal justice department as in city halls and police stations across the country. “There are going to be a lot of happy hookers,” said Calgary Police Chief Brian Sawyer. The _ whole embarrassing issue landed back in the unwilling hands of Parliament.

The case, primly listed on the Supreme Court docket as Lenore Jacqueline Westendorp vs. Her Majesty the Queen, began in a seedy and ordinary way on July 9, 1981. Westendorp, then 18, approached a man on a Calgary street and offered sex for payment. The man turned out to be an undercover policeman, who arrested Westendorp and charged her with breaching the city’s new antihooker bylaw. In wording similar to those of other cities, the bylaw bluntly says that “no person shall be on a street for the purpose of prostitution” nor approach anyone else for that purpose. Westendorp was acquitted at her trial, but the Alberta Court of Appeal overturned that decision. The Supreme Court in Ottawa spent a day hearing the case last December.

Writing the unanimous decision for the nine-member court, Chief Justice

Bora Laskin rejected the claim that the city was merely trying to prevent nuisances or obstructions on streets and sidewalks—a power within the city’s authority. “If that were its purpose,” wrote Laskin, “it would have dealt with congregation of persons on the streets or with obstruction,” regardless of what those persons did or said. In trying to stop soliciting, the court argued, Calgary tried to create a criminal law —something only Parliament can do. Ruled Laskin: “However desirable it may be for the municipality to control or prohibit prostitution, there has been an overreaching in the present case which offends the division of legislative powers.”

Just what impression the judgment left on Westendorp herself went unrecorded last week; she had disappeared into the grim limbo of a streetwalker’s life. But the decision instantly threw doubt over local antiprostitution by-

laws in such cities as Vancouver, Niagara Falls, Ont., Montreal and Halifax. Vancouver authorities stopped issuing summonses to hookers, or their customers, while they studied the judgment. Halifax’s antiprostitution bylaw was unofficially declared dead last week, two months after its approval by the provincial government. Twentyseven people had been charged, including six customers. In Calgary, Mayor Ralph Klein was drafting a letter to Justice Minister Mark MacGuigan, urging federal action against prostitution. Said MacGuigan in the Commons: “I may say our hope had been that the Calgary bylaw would be upheld.”

One option open to Parliament is to amend the Criminal Code’s battered Section 195.1, which has been crippled by two successive Supreme Court judgments. In a 1978 decision the court ruled that a hooker’s soliciting must be “pressing or persistent” to be a crime. Then, in 1981 it ruled that even when a woman approached several men proposing sex that conduct could not be judged “pressing or persistent.” Conservative MPs and some Liberals favor an amendment to the Code that would make prostitution easier and permit police to charge customers. New Democrats have opposed tighter Criminal Code sanctions against soliciting, preferring local government action.

To the frustration of local politicians, however, Parliament has refused to come to final grips with the problem. The Commons justice committee held hearings on the issue last year but could not reach a consensus on a solution. It will likely take up the question again, now that the Westendorp decision has been delivered, though agreement will be difficult. While MPs feel intense pressure from constituents in some ridings to clean up the streets, there is also a civil libertarian argument against a tougher Criminal Code section. The present clause, in fact, was enacted in 1972 to replace a vagrancy section that had drawn criticism because it discriminated against women and gave police loosely defined powers of arrest.

A similar argument is raised against beefed-up use of local bylaws. Tony Managh, the Calgary criminal lawyer who took on the Westendorp defence, says he was fighting for civil liberties. “If we allow the municipalities to pass bylaws to get people off the streets because of who they are, we face real problems in coming years with even more draconian laws.” Clearly the country has yet to find a compromise between two conflicting values—the control of streetwalkers and the right to walk the streets.

With John Faustmann in Vancouver, Dave Greber in Calgary and Stephen Kimber in Halifax. 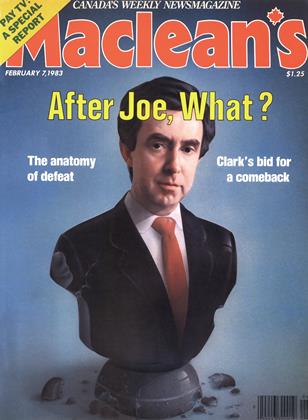