Easing the way out of marriage LINDA MCQUAIG March 21 1983

If the federal government introduces one-year, no-fault divorce this spring, as expected, the move will be the culmination of a long process aimed at removing blame from marriage breakdown. Traditionally, marriage in Canada was a binding legal contract that was virtually indissoluble unless one partner could prove that adultery had been committed. (Quebec and Newfoundland at one time even required an act of Parliament to dissolve a marriage.) The law essentially required that, before a marriage ended, there was a guilty party. As a result, many couples whose marriages had simply

collapsed were reduced to concocting false tales of adultery to win the legal right to part.

Then, in 1968, in response to the changing social conventions of the time, the newly elected government of Prime Minister Pierre Trudeau substantially loosened Canada’s restrictive divorce laws. The new act made divorce much easier to obtain by expanding the grounds to include, among other things, mental and physical cruelty, sexual assault, alcoholism and bestiality. Although that was an improvement for victims of the specific wrongs, the law still enshrined the notion that the collapse of a marriage was the result of some misconduct or wrongdoing. But the exceptions were covered under a dramatic new provision—that a divorce could be granted simply due to “marriage breakdown.” Although the new rule stipulated that the couple be separated for at least three years before divorce proceedings could even begin, a revolutionary concept had at least been entrenched in Canadian law: in some divorces neither partner was to blame. Some unions, the legislation acknowledged, simply no longer worked.

In 1976 the Law Reform Commission urged the government to expand the nofault concept. It advocated that marriage breakdown should be the only ground for divorce and suggested that dissolution could be made possible after a separation of only six months. The Canadian Bar Association took a middle course, voicing support for a one-year

waiting period—the position the federal government is expected to adopt within the next few months.

Removing the concept of blame from divorce has partially reduced courtroom mudslinging. Now the actual grounds for divorce are rarely contested. But battles still flare over equally sticky issues—custody and access to children, division of property and support payments. These issues have become a major political issue, particularly since the celebrated Irene Murdoch case a decade ago. The Supreme Court of Canada in 1973 denied the Turner Valley, Alta., woman her claim to half the value of her husband’s ranch, although she had worked alongside him during 25 years of marriage.

Provincial governments since then have established provisions for the equal distribution of property. (Quebec had already pioneered such legislation in 1970.) Still, the new rules vary dramatically across the country. In some provinces the laws cover all assets acquired during a marriage. But other provinces exclude from automatic division certain business, or non-family, assets.

In cases where the prickly property and custody issues are not in dispute, divorce, since 1968, has been a relatively straightforward matter. Even so, these so-called “uncontested” cases, like the contested ones, have had to be taken to court, often resulting in as much as $1,000 in legal fees. One effect of these costs has been a large drain on provin-

cial legal aid plans. As a result, the legal aid committee of the Toronto-based Law Society of Upper Canada urged last January that the court requirement be abolished in cases of uncontested divorce. The move was destined to cut some lawyers’ incomes, and the Law Society, the legal profession’s self-regulating body, initially rejected it, although it eventually endorsed the recommendation last month. Now it seems likely that the federal government’s expected overhaul of the divorce laws will eliminate the requirement of a court appearance in uncontested divorces. Only 15 years since divorce was a rare and guilt-ridden act, Canadians may soon be able to terminate a failed marriage in just one year, without going to court— and without being forced to feel as badly about themselves. 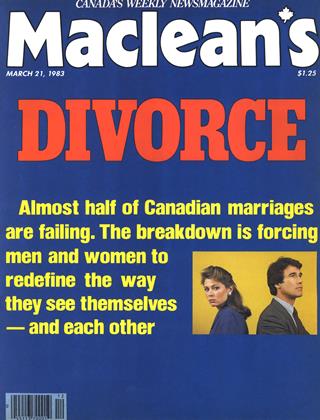