Ten hours of The Thorn Birds is a large slice out of anyone’s life; 10 hours of Richard Chamberlain as a Roman Catholic priest seems like an eternity.

The ambitious, devilishly handsome Father Ralph de Bricassart, sent to Australia to atone for a minor disobedience, is wracked by doubt: does he want the flesh or the cardinal’s hat? Repeatedly, throughout the padded, sluggish adaptation of Colleen McCullough’s sweeping best seller, de Bricassart receives visitations from the darker forces. His ambition haunts him, and so do women. But Father Ralph, who has a sterling Catholic sensibility, knows that “the best is bought only at the expense of great pain.”

He sees himself as a thorn bird that cannot sing until it finds the perfect bush and then, at the moment of ecstasy, impales itself upon a thorn.

In the feverish fantasy of guilt, suffering and redemption, pain makes the rounds with the regularity of the mailman. There is a major conflagration, an immolation and a drowning; many funeral corteges make their way, silhouetted, up the side of a hill. And throughout there is Chamberlain’s bland, male-model face to contemplate as the priest heads toward popedom. The Thorn Birds could easily have been called Bland Ambition.

Then, Barbara Stanwyck appears for several down-and-dirty moments, proving that there must be a God somewhere. As Mary Carson, the owner of the huge sheep ranch, Drogheda, Stanwyck ignites a parched screen. The sight of the silver-haired, septuagenarian jezebel lustily running her hands over Father Ralph’s Gentlemen's Quarterly chest is not to be missed. In an age when most actresses nibble at their roles, it is a supreme pleasure to see one from the old school chew every morsel with relish. Though the character is crudely and cheaply written, Stanwyck’s flashes of

star personality more than compensate; when she turns upon her antagonists, she brands the meaning of what she says into them.

Carson’s purpose in playing a young woman in a withered body is to add to Father Ralph’s misery. Cunningly, she leaves her fortune to the church, assur-

ing his political ascendancy on the many-runged ladder of the Vatican. And, to guarantee the continuance of the Drogheda dynasty, Carson brings her long-lost brother, Paddy Cleary (Richard Kiley), and his family to the ranch before she dies. The strife-torn Clearys ensure further entanglement with the already-tortured priest. Little Meggie (charmingly played as a child by Sydney Penny) eventually offers Father

Ralph the apple. “Why do you tuck so in my heart?” he asks her. “Why do you fill that space God can’t fill?” When little, unloved Meggie grows up (she is played by pretty Rachel Ward—though she is not as pretty as Chamberlain), misery has company. Meggie learns to suffer and suffer, drawing more characters into this convention of martyrs, specifically two children.

Misdirected by Daryl Duke, the Canadian responsible for the juicily nasty The Silent Partner, The Thorn Birds is also miscast. The beautiful Jean Simmons plays Meggie’s mother, an old crone whose goal in life is to keep her crown of thorns. Christopher Plummer is insufferably sage as a paternal cardinal; Piper Laurie is insufferably sympathetic as Meggie’s crippled friend. Australian ac-

cents keep shifting with whim, and Down Under itself looks as exotic as Malibu. Burnished with an ochre tint, the people in The Thorn Birds appear to have a collective henna rinse.

Not all the blame should be attributed to Duke. The networks, recognizing the revenue potential of lengthy miniseries, have begun to stretch them to the breaking point. Still, that does not excuse the baldness of Duke’s direction, nor the anemic acting. And the period design (from 1920 to 1962) is often inaccurate, with Rachel Ward looking as though she just returned from a 1980s hair salon.

When Meggie and Father Ralph consummate their love, she asks the object of her profane affections: “Why must the church have all of you?” Afterward, she walks along the beach during a sequence resembling a Jantzen swimwear commercial, while a theme song weeps, “It’s not easy being me.” It is not easy being anybody in The Thorn Birds, though Stanwyck gives it a game try with her Sheep Queen of Australia portrayal. She leaves after the first instalment—and viewers are advised to leave with her. 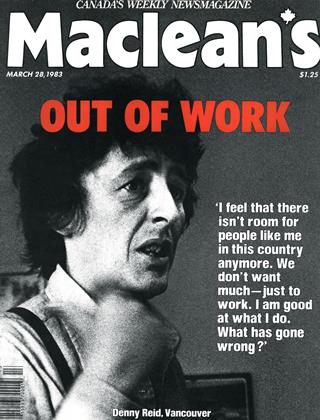