The rival political arguments leading up to Sunday’s federal election were proclaimed in slogans that no West German voter could fail to understand. Social Democrat (SPD) leader Hans-Jochen Vogel repeatedly stressed that he was acting “in German interests.” Voters had no difficulty in deciphering the implied message that on the nuclear missile issue, which has deeply divided the nation, Vogel wants to ease away from Washington and steer a more independent course between the United States and the Soviet Union. West Germany’s new conservative chancellor, Helmut Kohl, made a pitch for cultivating ties with Washington—and for PROSPERITY NOW, underlining his Christian Democrat’s (CDU) preference for stimulation over austerity as a cure for the sickness currently afflicting the country’s economy. Finally, there was a more blatantly political claim from Hans-Dietrich Genscher, whose Free Democrats (FDP) are severely squeezed between two big rivals. His argument, “Germany needs us,” was an attempt to suggest

The infighting in West Germany’s most important election in more than a decade has been dominated by slick advertising euphemisms and by the two issues that currently lie closest to the German heart: economic stagnation, with its human toll of more than 2.5 million jobless (10.2 per cent); and the controversial dilemma of whether to install U.S. cruise and Pershing II missiles on German soil at the end of the year.

For all the shallowness of the political debate, the campaign has captured the public’s imagination—and the superpowers’.

In addition to the vital issues, interest is heightened because the main contenders, Kohl and Vogel, are both newcomers thrown into a close contest by recent upheavals in West German political life and because

the international community has a stake in the outcome. Moreover, the pacifist ecological movement known as the Greens is fighting its first national election, with a good chance of electing some members to the Bundestag (parliament).

Most of the 496 seats to be decided Sunday, when nearly 40 million Germans are expected to vote, are likely to be split between Kohl’s conservative alliance of the CDU and its Bavarian sister party, the Christian Social Union (CSU), on the one hand and Vogel’s leftist SPD on the other. But the outcome may hinge on the fate of the two fringe parties, the FDP and the Greens, because neither the right nor the left is likely to win an absolute majority.

The latest polls give both the FDP and the Greens more than the five-per-cent support each needs to gain representation in the Bundestag under proportional representation. For their part, the main parties are running neck and neck. Kohl’s alliance has 47 per cent, and Vogel’s SPD is at 43 per cent. That could put Vogel in a position to form a government should the Greens reach

the Bundestag and agree to join the socialists in a “red-Green” coalition. But conventional wisdom favors Chancellor Kohl. Genscher’s FDP supports Kohl’s CDU-CSU alliance, and, if the FDP returns in similar numbers to the Bundestag, Kohl could reform the outgoing coalition.

That Vogel can entertain even a faint hope of power is a tribute to his success in restoring the SPD’s morale after twin disasters last October. First the party was evicted from power when its

FDP partners switched sides. Then the SPD’s experienced leader, Helmut Schmidt, resigned. Drafted to fill the vacancy, Vogel, a 57-year-old former lawyer, has worked a number of political miracles. He healed a deep split between the SPD’s left and moderate wings. Then he burnished his image with prompt visits to the White House and the Kremlin. As a result, Vogel moved the SPD up at least five per cent in the polls.

In stumping the country for votes, the self-assured Vogel delivered at least four speeches a day in city squares and halls, managing to convey an impression of managerial competence.

Kohl has been less successful in finding the magic to sway crowds. For one thing, the number of jobless in West Germany increased by more than 500,000 in the five months since he took i office. Not only that, but Kohl’s 5; speeches on topics that could

Kohl has been particularly vulnerable on the wrenching nuclear arms issue. In standing firmly behind the NATO plan to deploy the new missiles unless the Soviet Union dismantles SS-20 weapons pointed at Western Europe, Kohl has won grateful approval from Washington. Indeed, in what many Germans saw as an unwelcome intrusion into their electoral affairs, President Ronald Reagan last week declared that U.S. nuclear strategy would suffer a severe setback if West Germany elected a government opposed to deployment. Yet Kohl, in pleasing Reagan and the promissile lobby at home, has ignored the feelings of most of his countrymen. Some 60 per cent of West Germans, according to the polls, do not want the new weapons in their own backyard.

Vogel, on the other hand, has responded nimbly to public disquiet. While pledging loyalty to NATO itself, he claims that no final decision on deployment need be taken until autumn, when the Geneva talks wind up. Vogel has also pledged to do everything he can to ensure that deployment is unnecessary, hinting that the SPD might reject NATO’s nuclear weapons if an eventual breakdown was due to U.S. unwillingness to compromise.

Vogel’s stance has kindled suspicions that West Germany, once the soundest

link in the NATO defence chain, may be drifting toward neutralism. It has also drawn the Soviet Union irresistibly into the election battle. To exploit West German reluctance on the missile issue, Moscow combined threats of new missile deployments with blandishments (in the form of partial disarmament offers) to swing opinion against Kohl.

Despite the anxiety in the Kremlin and the White House, the outcome of Sunday’s ballot is unlikely to hinge on the missile question. The bread-andbutter concerns of an electorate increasingly worried about jobs and family budgets will be decisive. On that issue, Kohl’s conservatives have the edge. Their suggestions for reducing restrictions on a free-market economy and boosting investment are calculated to appeal to West Germans’ traditional self-reliance. By contrast, Vogel has called for a 35-hour week, greater state intervention to protect jobs and higher taxes to bankroll welfare schemes.

Few Germans think the country’s political system will emerge strengthened from the election. If Kohl is returned to office, he will be saddled with the unsteady Genscher and the overbearing Bavarian CSU boss, Franz-Josef Strauss, as coalition partners. “There’s no likelihood at all that the distribution of seats will make for a strong and stable government with a zest for tackling problems,” predicts Hans Heigert, editor of Munich’s daily Süddeutsche Zeitung. But, however uninviting the choice, West Germans are likely to opt to stay the course with Kohl rather than risk a “red-Green” alliance. 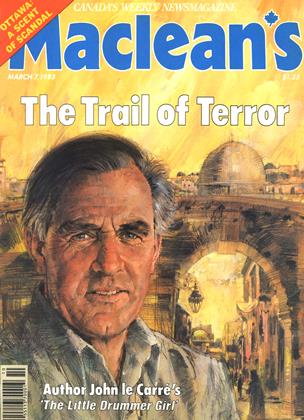