Finance Minister Jacques Delors has no sympathy for his countrymen’s anger at being forced to spend their summer vacations in France. Come holiday time, the no-nonsense architect of the country’s draconian new austerity package likes nothing better than to retreat to his modest country house to ply his skills as a handyman. But last week, as opposition mounted to the drastic fix he had just drafted for the nation’s sagging economy, even critics among government ranks charged that Delors’ patch-up may have been based on serious miscalculations. Despite his claim that “we must have the courage to risk unpopularity,” the minister had clearly underestimated middle-class outrage over foreign currency restrictions, which trifle with sacred French holiday traditions.

Even more ominously, Delors had misjudged the docility of the country’s two most powerful unions, the Communist-led Confédération Générale du Travail (CGT) and the usually pro-Socialist Confédération Française Démocratique du Travail (CFDT). At the very moment when his sweeping $11.5-billion bundle of tax increases, utility price hikes and spending cuts was being rushed into effect by a controversial

short circuit of the National Assembly, bristling union leaders called on their members to mobilize against the measures designed to slash their buying power by two per cent. CGT chief Henri Krasucki went so far as to urge workers to make up their losses with new wage demands that are sure to undermine Delors’ desperate bid to limit inflation to eight per cent this year. But the most discomfiting blast came from Edmond Maire, leader of the CFDT, who damned the government for abandoning its pledge to battle unemployment.

In an address to the Senate last week, Delors conceded that his projected zero growth rate means no more money to create new jobs. Worse, Delors admitted that anti-inflationary cutbacks will add at least another 100,000 to the unemployment rolls—now at more than two million—by the end of 1983. With that admission he banished the last vestiges of the rosy reflationary dream on which the French Socialist party sailed to power two years ago. With the collapse of its commitment to a utopian mix of Keynesian expansion, freewheeling government spending and job creation, France has given up the struggle to swim against the prevailing international economic current. Declared a

dejected Maire: “Now the left is governing just as the right did,”

But the bitterest irony may be that, after finally capitulating to the international financial markets, President François Mitterrand’s government once more finds itself the odd man out. As Delors sharply applied the brakes to the French economy, other Western finance ministers, sensing an upturn, have begun to apply the gas. Indeed, some economists are already questioning whether Delors was wise to buckle under—a gamble that may cost France dearly in the long term. Said Tom Miller, managing director of Hudson Research Europe: “The austerity measures aren’t really addressing France’s most pressing problems, while they’re threatening to repress the dynamism of the country’s economy.”

That price, exacted by the financial markets last month in return for limiting the scope of the third devaluation of the franc in 17 months, may mean that Delors has mortgaged the revolution’s future in vain. In addition, he may have cost the Socialists their support from France’s centre-left, which has become increasingly disaffected by a succession of measures so hastily concocted that they have added embarrassment to a sense of betrayal.

The latest and most extravagant example of bad policymaking is Delors’

attack on the country’s whopping $14.3billion trade deficit: a $300 annual ceiling on the amount of foreign currency vacationing Frenchmen can take out of the country. Peddled as a psychological shock to “make people understand what a difficult situation we are in,” it has in fact alienated the very middle-class and student population whose support the Socialists sö badly need. As 5,000 placard-waving travel agents massed beneath Delors’ office windows high in a wing of the Louvre, they mirrored the fury of an entire nation. Stiff European air tariffs mean that the currency allowance is barely enough for a weekend in Belgium.

The result in France this summer will likely be chaotic. Last week Roland Carraz, the junior minister of tourism, publicly expressed concern that the government might have to open up military bases and vacant schools to accommodate the crush. For their part, French hoteliers and resort owners even fear that foreign clients could stay away to avoid the crowds, at a heavy cost to France’s currency earnings. Last year an estimated 30 million foreign visitors spent $1.78 billion more in France than French tourists spent abroad.

But the weightiest criticism is that the travel restrictions can be expected to shave no more than $1 billion from the total of $4.9 billion spent on foreign travel last year. Many economists estimate that the saving will be as little as half that figure. Meanwhile, leaders of the tourist industry predict that Delors’ slimming measures will cost 9,000 jobs and $1.4 billion in lost billings.

Some French bankers fear that the restrictions could also lead to a black market for currency. Indeed, the left-

wing daily Libération has already published tips on how to circumvent the controls. Its recommendations: currency trades with citizens of countries abroad; deferred credit arrangements for hotel payments; and a general cozy-

ing up to foreign friends who can provide food and lodging, “even if you haven’t seen them in years.”

mercial travel allowance of $170 a day. But other loose ends remain: the problem of policing prepaid tourist packages and of the detested financial passports (carnets de change) to be issued to all French foreign travellers next month. Indeed, the details of the scheme already are so complex and cumbersome that there are reports the government is planning to hire the 9,000 workers laid off from the tourist business just to sort out what Le Matin dubbed “a case study of muddle.”

Still, that muddle is a reminder that the foreign trade deficit—running at more than $1 billion a month in the first two months of this year—remains the country’s Achilles heel. Mitterrand himself has dubbed it “insupportable” and pledged to wipe it out within two years. But his current determination has not diverted criticism that the root cause lies in the Socialists’ post-election expansionary euphoria.

Buoyed by its own magnanimous social rhetoric, the party’s reflationary spending spree boosted government and consumer spending by nearly three per cent. But that failed to stimulate a hoped-for industrial recovery. Instead, it encouraged a shopping binge that sucked in a wave of costly imports, exacerbating the balance of payments problem inherited from the outgoing centre-right government and pushing the franc farther on its downward spiral.

Now, Delors has set out to tighten the money supply and consumer credit, cut government spending by $2.8 billion and require taxpayers to “lend” the government an extra 10 per cent of their 1982 taxes in a reimbursable forced savings scheme which will reap $1.9 billion

over the next three years. But the real purpose of cutting back buying power by two per cent is not only to shrink the current 9.2 inflation rate to a projected five per cent by 1984—closer in line with West Germany’s three per cent. It is also to rein in France’s growth rate until it matches Bonn’s own sober forecasts of zero. That will certainly put a tourniquet on the currency hemorrhage.

source of the balance of payments shortfall—France’s mushrooming

Indeed, international speculation against the franc has been the chief cause of the failure of the Socialist dream. It has drained away an estimated $10 billion in France’s reserves in recent months. Ever since Mitterrand swept to power two years ago next month, the conservative banking establishment has expressed its distrust of a regime that turned a blind eye to the bottom line in the cause of social justice and full employment. The Socialists succeeded in holding unemployment at 8.9 per cent—a stunning success com-

pared to the rocketing rates of West Germany (10.2 per cent), Britain (13) and their Atlantic partners. But financial circles remained unimpressed. Inflation was their target.

Politics, too, has played a part. Business confidence, both inside and outside France, was undermined by Mitterrand’s inclusion of four Communists in his cabinet. The gesture immediately raised fears that they would deliver the entire Western arsenal of defence secrets into the Kremlin’s hands. In reality, the move was an astute attempt to neutralize Communist criticism of government policies—and last week’s expulsion of Soviet officials further calmed conservative nerves (page 29). At the same time, Mitterrand has failed to attain the industrial peace that his coalition with the Communists aimed to achieve.

A wave of strikes by a new generation of militant immigrant workers, spearheaded by the CGT, caused the French automobile industry a production drop of 50,000 cars compared to last year. Last week, as new stoppages hit the ailing Citroën plant in the Paris suburb of Aulnay-Sous-Bois, there were fresh fears that the firm might be driven into bankruptcy—and thus nationalization. More generally, industrial unrest throughout the industry threatens the jobs of one in 10 Frenchmen. The assembly-line disruption is also blamed for sapping national confidence in the quality of cars made in France and boosting the sales of Japanese and U.S. imports. If the unions break openly with the government in order to appease their restive memberships, Mitterrand will have cavorted with the Communist party in vain.

Such problems may place near-intolerable pressures on the soothing, pragmatic Delors. He was hailed on his appointment two years ago as a Socialist who could inspire international business trust. But it soon became clear that his views did not hold sway in cabinet, when Mitterrand bulldozed through the Socialists’ enormously expensive scheme to nationalize banks and other key industries. The inept handling of the nationalization program only increased the impression that he was a lame duck. Now, his success last month in restraining the third devaluation of the franc in 17 months may have come too late. Moreover, his hastily assembled packet of measures to appease the exchange markets may fail to cure any of the economy’s ills by attacking them all at once.

Indeed, while Delors is known for

provocative gestures designed to give him room to manoeuvre, gambles like the foreign travel curbs may have left him little latitude. Having alienated the government from voters in the centre, they have left Delors with an uneasy balancing act between appeasing the business sector, which remains skeptical, and keeping a restive labor movement in line.

Balancing acts have been the specialty of the 57-year-old Delors, who made his financial reputation at the Bank of France at the same time as he won his left-wing spurs for organizing its unions. But if he has now overextended himself, at least he will not have to expend much thought on his own vacation plans. This summer there is every likelihood that the finance minister will be fully occupied in his gilt office, watching as the discontented citizenry demonstrates below on the Palais Royale. 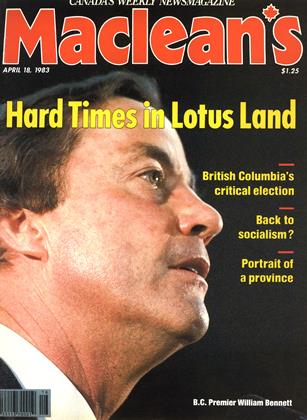