Although it is the fourth and final volume of David Helwig’s cycle of novels set in the Ontario university city of Kingston, A Sound Like Laughter falls chronologically third in line. The main story came full circle with last year’s publication of It Is Always Summer, in which one of the main characters in the series, Robert Mallen, becomes infatuated once again with the woman who eluded him 10 years earlier. In A Sound Like Laughter, Robert is reduced to an unattainable romantic figure himself, new characters take over the action and the thwarted passions of the other books have constricted to something more brittle and abject. Here the characters occasionally get what they want, only to graduate from frustration to chronic disappointment. While Helwig has turned this lugubrious state of affairs into a comedy, the laughter it provokes is rather hollow.

Helwig constructs a sophisticated soap-opera web of intrigue, weaving the characters together in perverse and surprising ways. Mike, a petty thief trying to stay out of jail, finds himself teamed up with Anne, a Queen’s University student in pursuit of an orgasm and admission to law school—in that order. Marianne, eager to domesticate her lover, Ernest, resorts to blackmail to secure tenure for him at the college. Kingston is less a landscape than a mood of emotional claustrophobia. Comfort and security come with cropped horizons: the irrefutable lake, the limestone university, the bureaucracy of domestic life. Helwig has taken advantage of a community in which the usual small-town sexual intrigues are complicated by the nagging moral presence of the college and the prison, with their implied promise of knowledge, excellence or, at the very least, rehabilitation. In other words, life might possibly improve. But in A Sound Like Laughter, life becomes increasingly absurd.

Helwig is a quick-sketch artist, able to sculpt a character in one paragraph and, as usual, he writes with effortless drama. But behind the black comedy there is a disquieting sense that nothing of value is really at stake. For sheer entertainment, the novel is a smooth ride, but the sense of life’s dwindling prospects may simply reflect the author’s own exasperation with a context and cast of characters that he has finished exploring. —MARNI JACKSON 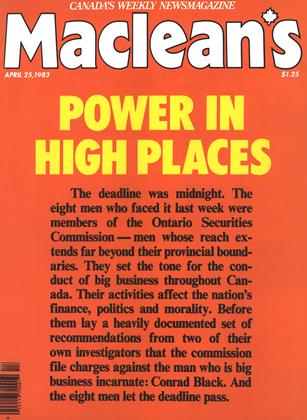