He came, George Bush said, not to negotiate but to consult. At a closed-door session safely out of Ottawa’s biting late-winter gale, the U.S. vice-president sipped a glass of orange juice and politely invited his hosts to declare their candid views on the day’s agenda. The Trudeau government did not disappoint him. Before Bush concluded his 14-hour official visit last week, federal ministers provided him with an intense lesson in how Ottawa views the world.

For the most part, what he heard was not disagreeable. The prime minister’s analysis of regional and global issues does not precisely match President Ronald Reagan’s, but it is not markedly different. On the critical question of whether Canada would permit testing of U.S. cruise missiles over the Canadian North, Trudeau’s answer was especially reassuring. In a sobering preprandial rumination on arms control, the prime minister said: “If the Europeans asked us to test the cruise missile, we’d be pretty poor [NATO] partners if we didn’t. In that case, we’d have to make up our minds to get out of NATO

and become like Sweden and spend a heck of a lot more on our defence than we do now.” More explicitly than ever before, Canada effectively told the United States that when and if the Pentagon formally asks for a testing agreement, Ottawa will comply.

More generally, the Bush visit represented another phase in the continuing repair of CanadianU.S. affairs—a process that began with the appointment last June of George Shultz as secretary of state. Indeed, with some notable exceptions (particularly acid rain), the bilateral relationship is probably as healthy now as it has been for some time. The vice-president’s genuine desire to listen and to please delighted Canadian officials. Privately, External Affairs Minister Allan MacEachen told aides that the talks were “exhilarating.”

And Bush himself, re-

What caused the uncommon euphoria was a remarkably frank and freewheeling series of exchanges, which began with a morning session on global issues. Bush told MacEachen and senior Canadian officials that Washington was increasingly optimistic about pros-

pects for a troop disengagement accord in Lebanon. Turning to Central America, MacEachen reiterated Canada’s hope that the El Salvadoran government would consent to an unconditional dialogue with left-wing insurgents. The vicepresident conceded that dialogue was desirable but he added that no one had any real ideas about how to get it started.

With the arrival of Trudeau, the conversation moved to EastWest relations. Trudeau observed that

Reagan’s “zero option” —which would banish all medium-range nuclear weapons from the European theatre—was an ideal goal, but not politically feasible. As he put it in his evening toast: “We have to deal with the art of the possible. If we can’t get zero, then we’ll have to look at the second-best possibility.”

The Canadians were also at pains to impress the Bush entourage with the delicacy of the cruise issue in Canada. Politically, Trudeau noted, a decision in favor of testing the missile might be very unpopular. The government’s burden would be lightened by significant progress in the U.S.-Soviet arms control talks in Geneva.

For his part, Bush insisted that Washington was deeply committed to genuine arms reduction and intimated—without specifics—that some movement away from the zero option would soon be made. Bush further implied that a decision to test the cruise missile would in fact promote arms reduction, demonstrating to Moscow the unity of the Atlantic alliance in the face of the Kremlin’s now-unopposed arsenal of 350-odd mobile SS-20 missiles. Trudeau himself pointedly noted that Canada’s anti-cruise protesters—some of whom demonstrated and threw eggs at the Bush motorcade last week—were much less vocal in demanding that Moscow cease testing its own version .

On bilateral affairs, the discussions focused on energy and trade matters. Bush advised the Canadians that Congress would approve some version of his administration’s natural gas deregulation bill, adding that Ottawa would be unwise to act on any other assumption. Both sides lamented the growth of protectionist trade sentiments and cited the need for lower interest rates.

In both capitals, however, there is a clear sense that a particularly nasty spell in the relationship has ended. More than anything else, perhaps, this improved climate is due to George Shultz, whose interest and understanding of Canadian affairs is keener than Alexander Haig’s, his predecessor at State. Indeed, when Shultz went to China earlier this year, he left specific instructions to be sent regular cables briefing him on Canadian-U.S. discussions. An old school chum of MacEachen’s, he is also in regular telephone contact with Ottawa.

But Bush, too, is an important player on the Reagan team. He has regular access to the president, more experience in foreign affairs than even Shultz, and—should Ronald Reagan choose not to seek re-election—he might well become the Republican nominee for president. His visit last week was further evidence of the fact that a diplomatic triumph need not be recorded in an official communiqué. 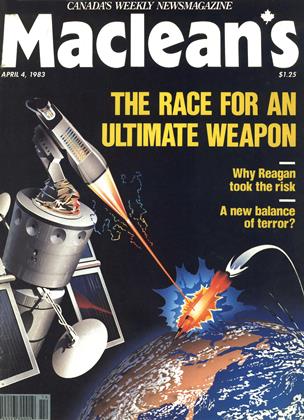