Baby pictures are the last thing most people would expect to find in the hotel room of a rock star. Especially when the star is Bryan Ferry, a British art-school graduate who in 1970 formed the avant-garde band called Roxy Music, which became one of the true trendsetters of the decade’s new pop music style. Ferry sang of love as “just another high,” wore dinner jackets (not jeans), had fashion models for lovers and designers for friends. His cool and mannered style has influenced a whole new generation of British bands currently racking up hits in North America under the banner “the new romantics”—such groups as Duran Duran, ABC, Soft Cell and Japan. But in Ottawa last week, midway through the Canadian dates of a North American tour which ends in Philadelphia on May 28, Ferry was more concerned with showing off a whole deck of snapshots of his sixmonth-old son than with his status as a pop icon. (The infant is named Charles Frederick Otis, in honor of, respectively, jazz saxophonist Charlie Parker, Ferry’s father and soul singer Otis Redding.)

That Bryan Ferry should engage in such conventional domestic behavior is only an index of larger changes that have taken place in his professional life. Roxy Music’s latest album, Avalon, is the slowest, smoothest, most earnest and unabashedly romantic music that the band has ever put out. It is also the most successful, winning a platinum record for sales of 100,000 records in Canada—the first such honor for the band in North America. And the current tour is Roxy Music’s most successful venture in North Americaeven better than the tour that promoted the band’s hit single Love Is the Drug in 1975.

Roxy Music has always been more popular with Canadians than Americans. Ferry himself says: “Canada is much more European-minded. Subtlety and complication are understood by the European temperament much more than American sensibility, which is geared totally toward, ‘Well, that’s a hamburger, that’s a gourmet meal, that’s a soap powder, that’s a country and western tune.’ ” The U.S. music in-

dustry had no label for Ferry until his imitators came along and waved the flag of romance, abetting the success of Avalon and The High Road, a four-song mini-album released in March.

The band’s growing popularity in the United States may also be partly responsible for the fact that Ferry’s persona, always the key to the band’s appeal, has grown more direct and accessible. Peter York, a journalist who chronicles art, fashion and pop music in British culture for Harpers & Queen magazine, described Ferry as a creator “of the dominant high-style esthetic of the 1970s.” He also posed him as “the best possible example of the ultimate art-directed existence” and suggested that he and fellow art-rocker David Bowie should hang together in the Tate Gallery.

But, like Bowie, Ferry has steadily turned away from the mid-1970s posturings that made them as much art objects as rock stars. While Ferry has always been more flesh and blood than Bowie (who played at being pale, puny and reptilian), he no longer poses as the world-weary roué on the prowl for the

fleeting satisfactions of the singles bar. In his latest work Ferry abandons his mannerisms in order to wear his heart on his sleeve.

Those sleeves, however, are still custom designed. Dressed in a white shirt, linen trousers, silky socks and sleek slip-on shoes, Ferry looks right for the role of bon vivant. Instead, he speaks of family matters. His parents (his father was a coal miner) are “very important” to him: they live in the cottage next to his country house, an hour’s drive from London. He hated children until he had one. He now finds that “to suddenly have someone else to look at and feel vaguely responsible for is very interesting.” He goes to parties “hardly at all.” Since his marriage last year to Lucy Helmore, 24, a former London debutante who travelled in fashionable circles, he says he has been “more inclined to direct my energies into work.”

Now 37, Bryan Ferry has been 3 around long enough for the Britl ish music press to indulge in nasty revisionism. A feature article in Melody Maker last September complained that Roxy Music “these days most closely resembles the empty glitter of pompous little cretins like ABC and Simple Minds.” It also called Ferry “the old crooner.” Ferry, of course, cannot help that his distinctive vocal style—a curious mock-heroic combination of the soul of Smokey Robinson and the cool, continental finesse of Yves Montand—influenced the new bands. And while he is grateful for the ironic fact that the hits of his younger imitators helped gain Roxy Music more acceptance in America, he is less enchanted by the phenomenon that has been promoted as the new music. “I think a lot of it is very shallow. I try not to be,” he says.

Onstage at the Ottawa Civic Centre, backed by a nine-piece band that included longtime associate Phil Manzanera on guitar and saxophone player Andy Mackay from the original Roxy Music, Ferry was anything but shallow. He slipped from the sly and debonair to the heart-deep, singing, “I’m sorry that I made you cry,” in a new voice stripped down to raw compassion. He proved himself not only the most fashionable Englishman since the Duke of Windsor but also the most romantic. 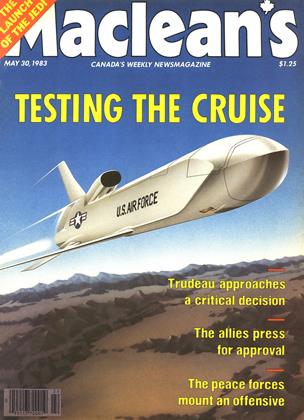