The police raid on the white stucco house on Winnipeg’s residential Corydon Avenue began quietly enough. Around 9 a.m. last Friday a plainclothes policewoman walked into Dr. Henry Morgentaler’s four-week-old abortion clinic and inquired about having an operation. Told to come back later for an appointment, the officer returned, this time armed with a warrant and flanked by two other policewomen and five detectives. Within moments several officers emerged and escorted a doctor, two nurses, the clinic’s receptionist and two other women to police headquarters for questioning. Inside

the house the remaining detectives conducted what Morgentaler’s lawyer, Greg Brodsky, later described as “a very thorough search.” After two hours a paddy wagon pulled up at the clinic’s back door to take away another group. This time the four women and a man, possible clients of the clinic, kept their heads hidden under blankets to conceal their identities from reporters and jeering antiabortion protesters.

By noon police had released all those rounded up in the raids without laying any charges. But that did not stem the rising clamor of controversy. When he heard the news, Joe Borowski, the former NDP cabinet minister who now leads Manitoba’s antiabortion forces, raced to the clinic to express his approval of the policewomen’s work: “You did a great job, gals,” he declared. The pro-choice forces reacted just as swiftly. From his clinic in Montreal, Morgentaler indignantly condemned “the uncivilized action of disturbing the patients and staff.” That night 450 of his supporters rallied outside the provincial legislature bearing T-shirts that read “Joe Borowski’s mother had no choice.” In the meantime, messages of support came from across Canada. One telegram, from 25 Vancouver women, was typical. “The war has started again,” it read. “We will raise hell and money.”

Although the raid was expected after a month of proand antiabortion demonstrations and scuffling in front of the clinic, the timing was a surprise. Only the day before, Manitoba Attorney General Roland Penner, who personally favors freedom of choice, termed an earlier police report on the clinic’s activities “inconclusive.” As well, the NDP cabinet is helplessly split on the issue. So far, the government has refused to grant hospital status to the clinic, which would permit it to perform legal abortions. The raid has only increased the pressure on Premier Howard Pawley to take a definitive stand.

Among the problems stalling the politicians is the question of whether there is a good legal case against the 59-year-old champion of abortions on demand. Morgentaler has already been acquitted three times by Quebec courts on the charge of I performing illegal abortions. ? Juries consistently concluded £ that he was merely performing “necessary” medical operations.

1 will also stand by him, Morgentaler has vowed that he will keep the clinic operating, even if

charges are laid, until a court decision.

Manitoba’s politicians cannot postpone confronting the question much longer. This week, as the police deliver their report on the raid to Senior Crown Attorney Wayne Myshkowsky, opponents of the action will likely make good their threat to deluge the legislature with phone calls, letters and more demonstrations. For the time being, one of the century’s most divisive legal and medical problems is firmly centred on the provincial government and, even more, on the house on Corydon Avenue. 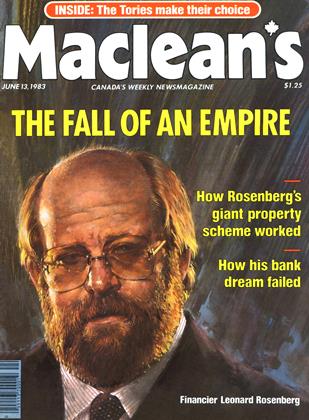