Mitel Corp., the brightest star in Canada’s high-tech galaxy, announced another first this month. But it was not the rosy sort of Mitel pronouncement that has been the hallmark of the fledgling telecommunications firm, which transformed itself into one of North America’s fastest-growing companies during the past seven years. Instead, Mitel’s U.S. subsidiary, Mitel Inc., announced that it will close its Burlington, Vt., manufacturing plant on Sept. 1 and lay off 150

employees. A company spokesman explained that market demand for components of its telecommunications systems in the United States had grown more slowly than anticipated. The announced shutdown reflected problems within Mitel, which still boasts that it will reach $1 billion in annual sales by 1986.

Despite ebullient public predictions on the part of company chairman Terence Matthews, Mitel’s credibility has been rapidly eroded during the past few

months. Its shares have plummeted from a high of $38 last December to around $22 last week. As Gregory Richards, an analyst with Morgan Stanley & Co. in New York, commented recently, “We’re not recommending the stock anymore—we’ve gone from an enthusiastic stance to a neutral one.” In fiscal 1983 Mitel’s revenues rose 25 per cent, to $255 million—a long way from the 85-per-cent increase in the previous year. At the same time, pretax profits plunged from $28 million to just under $3 million.

The announcement of the plant closing followed decisions to build only one New Brunswick manufacturing plant instead of two and to defer the development of a facility in France. According to Wood Gundy Ltd. technology analyst Frederick Larkin, Mitel faces a potentially devastating problem of plant overcapacity throughout its network.

Delays in marketing Mitel’s SX-2000, the digital switch designed to control the flow of as many as 10,000 voice and data communications lines—have

caused the greatest concern at the company’s Silicon Valley North headquarters in Kanata, near Ottawa. Production was scheduled to begin this spring, and Larkin said that if “there are serious further delay companies that had planned to buy from Mitel are going to commit to somebody else’s machine.” The SX-2000 is the most sophisticated product ever developed by Mitel and it will sell for an average price of $250,000, compared with $20,000 for the firm’s SX-200, the 160-line phone exchange, which was the basis of the company’s triumphs. Already, the delays have led one company, Vancouver-based Commercial Telephone Systems Ltd., to cancel an agreement to market the SX-2000.

Still, Mitel may have a secret weapon in its race to get the technology on the market ahead of the competition. It signed a secret agreement in principle last July with the giant International Business Machines Corp. of Armonk, N.Y. What is known of the pact suggests that Mitel would provide a line of switching products compatible with IBM products, then take advantage of IBM’s enormous marketing organization. Although Wall Street rumors suggest that IBM too is concerned about delays in getting the SX-2000 to market, Canadian observers disagree. Moss Lawson and Co. Ltd. salesman Peter Heyerdahl, who provided technical input into his company’s recent report on 16 high-tech firms, said that delays are apparently being caused by design problems with the software program, in part initiated at the request of IBM. He said that Mitel

“gambled the company” in going after the SX-2000 market, but he added that the company may have now surmounted most of the obstacles. Said Heyerdahl: “If the agreement with IBM is as good as I hope it is, they could be in good shape. It’s a potentially tremendous market.” Mitel refuses to elaborate on the terms of the deal. Executive Vice-President Donald Gibbs told Maclean’s that a secrecy proviso was part of the agreement. Still, some uncertainty arose over the highly touted agreement last week when Mitel learned that IBM had struck a deal with Rolm Corp., a Californiabased Mitel competitor, and intends to buy an equity interest in the company. As a result, said Matthews, Mitel will

have to “re-examine” its agreement with IBM.

Another view of the highly publicized problems besetting Canada’s corporate darling was explained by Jon Kanitz, a Wood Gundy 42nd Street broker. Said Kanitz: “Mitel stock has always been volatile, but that’s typical of a relatively new, high-tech company. The market probably overreacted to delays in marketing the SX-2000.” Underscoring an argument made by other market insiders, Kanitz argues that recent action in the price of Mitel stock has “just served to correct for the unjustified optimism of late last year.” That optimism was fed by the company’s explosive growth from two Ottawa-area dreamers—Matthews and company president Michael

Cowpland—to a 5,210-employee empire, which had become the second-largest manufacturer of telephone switching equipment in the world. In a sentimental market, said Kanitz, Mitel was one of the biggest and newest of the large high-tech firms, and Canadian institutional investors stampeded to get their money into the company. Recent problems, compounded by a lacklustre fiscal 1983, have merely served to shock investors and damage the stock’s performance—a trend that takes time to rectify.

Indeed, Kanitz’s views are echoed by Michael Potter, president of Quasar Systems Ltd., an Ottawa-based software firm. He maintains that the press is going a trifle overboard and is “over-

doing the setback at Mitel, just as everyone overdid the meteoric rise. I don’t think it has been put in the proper perspective.” Potter wants to know whether anyone ever really believed that Mitel was going to double its sales yearly—indefinitely. And he wondered if the larger question arising from Mitel’s problems is not whether the absolute faith being placed in the high-tech industry as a whole as a mecca for constant Canadian growth and employment is well-placed. “I think the effects of the recent recession made that point,” he noted. But as far as Mitel is concerned, Potter hardly thinks the company is ready to relinquish its place of honor in the high-tech firmament. At least, not yet. 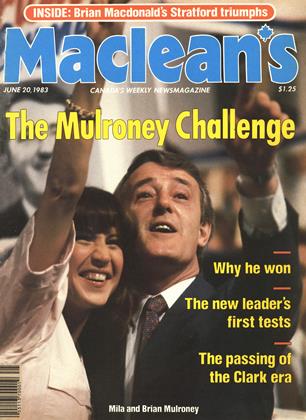