No more paupers at the Plate Trent Frayne June 27 1983

Ordinarily, paupers need not apply for the red-carpeted trek to the winner’s enclosure at Woodbine following each renewal of the Queen’s Plate, a horse race that hasn’t missed a beat in 124 years, or since Queen Victoria put her name to it in the summer of 1859. The high cost of getting a firm grip on a horse of elegant breeding usually dissuades people who have to ask, “How much?”

If they do ask, they may find they suddenly lose the power of speech. Two years ago, at the Keeneland yearling sales in Kentucky, three colts sired by the indefatigable Northern Dancer, a Canadian to glaze men’s eyes, brought $3.5 million, $3.3 million and $2.95 million from people with more money than they know what to do with.

“It was an excellent sale,” Charles Taylor reflected the other day, a man apparently not given to wild exaggeration. Charles has taken over for his ailing father, E.P., whose Windfields Farm owns and operates Northern Dancer, Canada’s first winner of the Kentucky Derby (in 1964) and not, at 22, a sire beyond value (his owners turned down a $40-million bid last summer).

Still, it isn’t always necessary to be of the manor born in order to get the Queen’s prize of 50 guineas. Historians almost always hark back to the year 1948 and the man Jim Fair to prove it. No grey topper and swallowtail coat for him on Plate day, any Plate day, but especially the one when he threw a saddle across the hide of his own Last Mark for the 89th running of the classic 35 years ago. Fair came out of the grandstand mob, roaring and waving his arms, red-faced and triumphant. As concessions to the race’s flossy convention, he had put on a necktie and buttoned his vest.

Fair was a garrulous farmer from the hamlet of Cainsville, in southwestern Ontario, a salty, shambling, roughhewn veteran usually seen along the backstretch chomping an unlit cigar in the middle of his friendly kisser. He always carried a cane, explaining once that it was “to knock the dogs off.” Almost everybody who knew him tells the story of how he showed up at his barn one morning where five or six youngsters were hoping he would let them graze his horses or walk them.

“Well, boys,” the great man boomed, “what’s for breakfast? Have we

“Fine, fine,” cried Fair. “Fry up a couple for me, and scramble the rest for yourselves.”

Anyway, when Fair’s colt romped in the Plate, surging crowds broke gleefully onto the track and went charging across the finish line to hail popular old Jim.

The most recent horse to enchant vast numbers of people who have never rented morning coats is Sunny’s Halo. Partly this popularity is nationalistic, because Sunny’s Halo is just the second

Canadian-bred to win the Kentucky Derby since that cornball hoedown was invented at Churchill Downs in 1875, and partly it’s because the colt is not the product of a couple of millionaire thoroughbreds dallying in a rose garden. His sire, Halo, has modestly impressive credentials, but his dam, Mostly Sunny, seldom made anybody stop and stare. She was an $8,000 claimer when trainer Dave Cross added her to a small string that he conditioned for a Toronto stockbroker, Dave (Pud) Foster. They had hoped that their colt would add the Queen’s Plate this Sunday, but an old ankle ailment flared up

and put Sunny’s Halo on the shelf for a spell.

Foster and Cross hooked up at Woodbine in 1969 when Cross, a Victoria native who had banged around U.S. tracks for 15 years, moved north to the Ontario circuit. Foster was a guy who had quit school at 15 to go to work.

I was a whiz in math. I could take one look and come up with the right answer—except I didn’t know how I got there.”

Foster was the third of four boys whose father ran Fiengberg’s Delicatessen, where Pud also worked as a youngster. “I sliced the corned beef,” he says, now a heavyset droll man, soft of voice. “They didn’t have meat-slicing machines then. I was the meat-slicing machine. I got the scars to prove it.”

He doesn’t remember why he was called Pud (as in pudding, not puddle), but he already had that tag as a kid of 10 selling papers at Toronto’s Bathurst and Queen streets, right downtown. Soon he was selling programs at the ball park. When the club was on the road, Pud sold newspapers at Toronto’s four race tracks. One year, a kid he had played with, Yonnie Starr, trained a horse called Ace Marine. Ace Marine won the Plate at the old Woodbine track. “I bet everything I had and everything I could borrow,” Pud remembers. “I had only been married a little while, and our bungalow was too small for us. We wanted a bigger house but we couldn’t sell the bungalow. So the night of Ace Marine’s win I came home with money bulging from every pocket, and my wife met me at the door. ‘Guess what?’ she said. ‘I’ve sold the bungalow.’ From then on I was hooked on the track.”

When Cross claimed Mostly Sunny in the early 1970s, she became the only broodmare Foster owns—to this day. “I knew she would pass on something special,” Cross said recently. “She was the sorest, gamest horse I ever saw. She would run her guts out one day and then have to go lie down for three days. She had a heart that must have weighed 112 lbs.”

In 1979 they decided to send Mostly Sunny to Halo for a tryst. They got Sunny’s Halo, whose earnings now border on $1 million, and if he had stayed sound he would likely have put his owner in the winner’s circle this Sunday. That’s the way it goes sometimes; you can’t have everything. 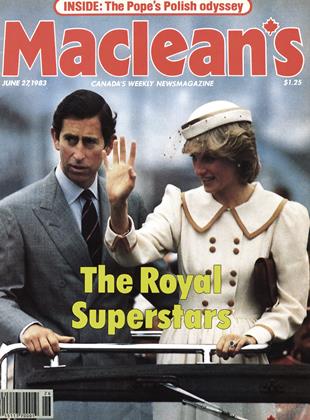