Her hairspray had given way under a stiff Channel breeze, but British Prime Minister Margaret Thatcher was, as usual, unruffled. Buttoned into a Day-Glo orange life jacket to protect her trademark prim navy tailoring and pearls, she clambered onto the prow of a coast guard rescue boat to scan the waves. But the attitude she struck—staunch like a figurehead—was not meant for the clutch of faithful Conservatives gathered adoringly beneath Dover’s white cliffs, nor even for the hecklers and peace protesters. She brushed them off in the same brisk schoolmarm manner which she has lately reserved for too-liberal cabinet colleagues. Instead, the pose was carefully aimed at a phalanx of TV cameramen who jostled to film her.

The scene was symbolic of a bitter election campaign that prom-

ises to return Britain’s “Iron Lady” to office with one of the largest parliamentary majorities in the country’s postwar history on voting day, June 9. Last week, as Labour Leader Michael Foot’s depleted and bitterly divided party squabbled publicly over its unilateral nuclear disarmament platform and the patched-together Alliance of Liberals and Social Democrats fell further

behind in the public opinion sweepstakes, that prospect became ever more likely. Successive polls gave Thatcher’s Tories up to a 22-point lead over Labour, and her one-woman show seemed firmly in command of the Good Ship Britannia. Her lightning visit to the Williamsburg summit (page 27)—a free public relations boost—seemed almost unnecessary.

But Thatcher’s apparently unassailable position did not tempt her to slacken her campaign drive. Stumping the country in a deskequipped campaign bus that she has nicknamed “The Robust,” or cityhopping in a donated private jet appropriately named “The Island Endeavour,” she alternately cautioned party £ workers against compla| cency and invoked the I spectre of a Labour win * which would raise the * “dark divisive clouds 1 of Marxist socialism.” g Thatcher and her im! 2 ported U.S. image makE er, Gordon Reece, are

convinced that what matters is not what she says but how she says it. The burning issue has become Thatcherism itself. The most pervasive question is not whether she will win, but by how much—and what she will do after the victory that Alliance Leader Roy Jenkins warns will produce in Britain the most right-wing government in the Western world. Indeed, the most remarkable phenomenon is that, despite 3.2 million out of work, the highest unemployment rate since the 1930s, and the prospect of U.S. cruise missiles being installed by year’s end, personality and leadership, rather than issues, are dominating the campaign. As awardwinning Anglo-Indian novelist Salman Rushdie declared, “The worst thing about this election is that nobody seems really angry about what has happened.”

To a growing number of political observers, Thatcher’s success in defusing the unemployment issue can largely be credited to her opponents. Last week Labour’s acrid divisions over nuclear disarmament diverted the party into a humiliating three-day defence of its own platforms instead of an all-out attack on the government. The split opened up when Deputy Leader Denis Healey, a longtime opponent of the party’s support for unilateral disarmament, told an election audience that it would not be wise to scrap Britain’s nuclear submarine fleet and Polaris missiles until the Soviets made concessions. Foot succeeded in smoothing over that departure from Labour’s platform. But then former prime minister James Callaghan, Foot’s predecessor as leader, repudiated the party’s entire defence policy. Callaghan insisted that he had only expressed what most Britons thought. Indeed, unilateral nuclear disarmament, which a year ago looked like a guaranteed vote-getter, has boomeranged as an issue. A recent poll shows that 77 per cent of voters are now against it, many of them working-class Labour supporters.

Foot’s personal image has proven to be a distinct handicap at the polls. Pictured as a likable but absentminded intellectual, forever shambling across Hampstead Heath with a walking stick behind his unfortunately named dog, Dizzy, the 69-year-old former deputy prime minister has not been able to shake the label of an aging scarecrow who does not shape up as prime ministerial material.

His vivacious wife, author and filmmaker Jill Craigie, has finally persuaded him to accept the admen’s advice and don new dark suits, buy new glasses and tone down his firebrand platform rhetoric to a style more suited to a television studio. But his lingering unease before the cameras is a liability

in an election which, more than any other in Britain’s history, is being fought in a North American manner— the emphasis is on personal style and TV presence. This may also pose problems for Jenkins, whose upper-class speech patterns, lisp and love of claret irk many voters.

For both opposition parties the election is complicated by the most drastic alteration of riding boundaries since Parliament first assembled in 1295. The result has been that Labour’s urban strongholds have been carved up and

the Conservatives have gained a sharp edge where they are entrenched in the suburbs and the countryside. But the political geography of Britain has changed by more than boundary lines. With weaker unions, fewer industrial jobs and more white collar workers, Labour is losing its traditional power base. Thatcher’s policy of allowing public housing tenants to buy their homes has further eroded Labour support. Half a million people have already leaped at the chance to become men of property— a ringing endorsement of Thatcher’s view that there is nothing better for

taming a restive populace than a mortgage and a stake in middle-class concerns and values.

Thatcher’s advisers have made the 1983 election a one-woman personality cult campaign. In 1979, onetime TV producer Reece groomed her for victory by persuading her to tone down her brassy, lacquered hairstyle to a darker ash blonde and to lower her parliamentary shrillness by several octaves through humming exercises. Recalled once more from his job as adviser to U.S. petrochemical magnate Armand Hammer, Reece’s services have been less essential this year. Instead, the Tories’ hotshot advertising team, Saatchi & Saatchi, have concentrated on denigrating the opposition. Their advertisements offer a checklist on the consequences of voting Labour. One section reads: “I empower the government to borrow as much money as they wish... and agree to let my children pay the debt.” Thatcher herself has been equally tough. She publicly humiliated Foreign Secretary Francis Pym, whom she derided before the cameras for daring to suggest that a Tory landslide might be less than a perfect result. But, as the polls show, most Britons admire Thatcher’s “strength of character.”

That quality goes hand in hand with what the press describes as “the Falklands factor.” Indeed, a surprisingly large number of Falklands veterans have come forward during her campaign. After the captain of the lifeboat she clambered aboard at Dover turned out to be the father of an HMS Fearless pilot, some watchers took to joking about the “Falklands factory.”

Thatcher’s setbacks have been relatively insignificant. One Tory candidate was revealed to be a former official of the fascist National Front—to the consternation of Thatcher’s Jewish adviser and mentor, Sir Keith Joseph, who had been sent to the riding to support him. A slick advertisement aimed at charming the black ethnic vote was refused by Britain’s largest Caribbean weekly. Editor Arif Ali denounced it as “insulting, obnoxious and immoral.” But Thatcher was able to shrug off those slips, just as she dismissed as “silly, trivial leaked documents” cabinet papers indicating that she plans to emasculate the British unions.

Thatcher seems determined to show that a good middle-class family lady does not rest at the helm when steering Britain toward the right. With only days to go before the June 9 vote, Thatcher has the limelight to herself. Almost to herself, that is. Thames Television has hired former CBS anchorman Walter Cronkite to comment on the election, and the Daily Mail has imported American writer Norman Mailer to provide coverage. 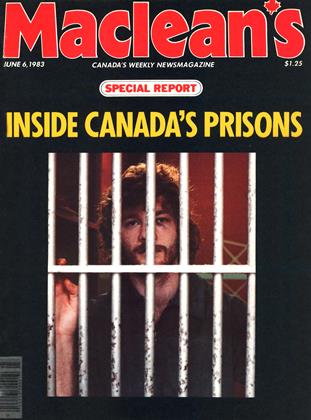