The next federal election campaign may be a year or more away, but the economic battle lines are already being drawn. On the Conservative side we have quite clearly seen the bare bones of a strategy: sell all Crown corporations to the private sector (or at least some of them) and set this country’s economy back on the path of free enterprise. The federal Liberals have not articulated their position as clearly. Part of the reason may be that Pierre Trudeau does not seem to be interested in getting involved in any serious intellectual economic exercise. And part may be simply that the entire Liberal caucus has not focused on what might revive sagging Liberal popularity. A clear position may not come until the party elects a new leader.

Despite that, a skeletal position can be discerned by analysing the subtleties of what the Liberals are doing and saying. In essence, no Liberal government will allow all of its laudable and hardwon social programs to be eroded in the name of free enterprise. If the economic growth that is necessary to support those programs is not forthcoming from the private sector, then the Liberals will ensure that it is forthcoming by enlarging the public sector.

On the surface, the voters’ choice would appear to be clear-cut—at least if they are able to keep the different economic positions distinct in their minds and if they find the other planks of the political platforms agreeable. But, in fact, nothing could be further from the truth. In the first place, Canada has never been a “free enterprise” country. Canada became a nation despite all common sense or economic rationality. The natural lines of communication and transportation in North America are north and south. But the emergence of a sovereign Canada in 1867 made Canadian politicians immediately aware of the need to create east-west cohesion. That is what Sir John A. Macdonald’s national policy was all about: a tariff wall to keep out U.S. goods and a railway to push Canadian nationalism westward. Public policy and public enterprises to activate the policies in the absence of private initiatives are even more Canadian than the beaver and the Maple Leaf. It is ironic that we Canadians spend so much time looking for ways in which we differ from Americans but overlook the one crucial characteristic that has always set us apart-

an almost blind belief in the virtues of public enterprise.

While an overwhelmingly free-enterprise ideology shaped U.S. economic nationalism, Canadian public policymakers have always had only a secondary interest in competition. Canada’s overwhelming reliance on public investment has shaped the country’s economic nationalism. Thus, while the United States spent decades fostering individualism and breaking up trusts, monopolies and anything else that detracts from healthy competition, Canada has tried to solve a different problem: how to get rid of corruption and inefficiency in public enterprise without eliminating the public investment itself.

The Conservative call for a return to free enterprise may have a wonderfully stirring ring, but it is mythical: you cannot return from where you have never been. At a guess, when the election campaign gets under way, this flaw in the Conservative position will come in for sharp criticism as the Liberals do little more than describe the course of Canada’s economic history.

By the fall of 1984 the private sector will have had 20 months to demonstrate the real stuff—Finance Minister Marc Lalonde’s April, 1983, budget quite

clearly charged the champions of free enterprise with ' getting the economy moving, with creating jobs and providing the kind of growth required to support the massive public enterprise that Ottawa has put in place.

But the federal Liberals have stacked the deck: they have also established the biggest and least accountable public enterprise of all—the Canada Investment Development Corp.—created by ordersin-council without reference to Parliament. More than a year after its birth the CIDC has yet to disclose its financial position to our elected representatives. The auditor general has received no guarantees that he will ever have access to its accounts. The CIDC, responsible only to cabinet and beyond the reach of Parliament, holds some $2.5 billion of taxpayers’ money. If the CIDC’s chief architect, Senator Jacob Austin, has his way, the agency will become “an instrument to make investments at the direction of government.”

If the next federal election campaign shapes up as I expect it will, the lines between the Liberals and the Conservatives will likely not be sufficiently sharply drawn to allow voters to clearly see what the differences are. But the picture should be clearer than it is now. On the one side, the most sustainable Conservative argument will be that some, but not necessarily all, Crown corporations should be sold to the private sector. It is all very well for the Prime Minister to say that Canadair, in private hands, would have lost money anyway, but the fact is that the profits earned by the top five Crown corporations is offset by an investment many times greater to keep the five least profitable ones afloat. On the other side, the Liberal position will have to be more sharply focused on the benefits that public enterprises have delivered to Canadians. Those benefits will have to be couched in social, not financial, terms.

For voters, the crucial and as yet unanswered question is how to rid public enterprise of corruption and inefficiency without eliminating the public investment. No government has yet succeeded. With increasing amounts of taxpayers’ dollars at stake, that may be the overwhelming reason to get rid of the proliferation of public enterprises and the political party that fosters them.

7s it possible to retain Crown corporations while ridding them of often characteristic corruption?’ 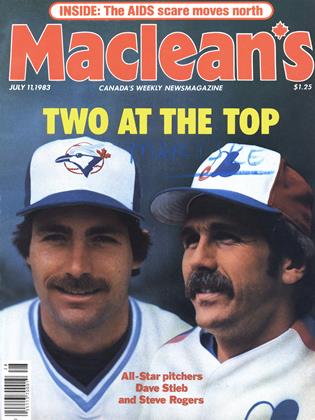