There was much to celebrate, much to ponder as the cabinet met to consider Phase 2 of its master plan for Canadian economic recovery. Actually, this was Phase 2 of Phase 8 of an earlier program for economic recovery, but no one in the cabinet had been there long enough to remember. Only Dr. Strangecurve, the government’s longtime economic guru, could remember, and he wasn’t talking. Reporters, questioning Dr. Strangecurve on his arrival at the meeting, could pry out of him only the rapid-fire bursts of economic jargon that had become his trademark. “Leading economic indicators,” he quipped, in answer to a question on the purpose of the meeting. “Trend-setting rate. Ha ha ha.”

In the space of only one year, and seven budgets, much had changed. Even the setting was different. The cabinet, criticized for making all of its economic decisions in the insulated, hothouse atmosphere of Ottawa, had decided to take its deliberations to the people. Consequently, the cabinet had packed its computers, its advisers, its pressrelease writers and advertising men and rented a boardroom in a large Toronto hotel. “It’s eerie, being so close to the grassroots,” said the Minister for Nuclear Suffocation and Cruise Missile Testing, as the cabinet sat down in the Green Room, newly done over in beige for the occasion.

Phase 1 of the economic recovery program had necessitated a massive governmental reorganization. The Minister for Inflation and Hunger h^d lost the inflation portfolio, which had been sent to the National Archives for safekeeping and cleaning. He was now the Minister of Hunger and Fish. Fish had been taken from Fisheries and Oceans, and oceans had been combined into a new ministry, called the Department of Visible Minorities and Oceans. A Department of Technopeasantry had been established, under the former Minister of Malnutrition.

More applause greeted another cabinet veteran, the Minister of State for the Disappearance of the Family Farm. “That’s a fine report,” the minister said. “If this keeps up, we won’t have to worry about that Gilhooly, or whatever his name is.” “O’Rooney,” said the Minister of Revival, formerly the Minister of Despond.

“Whoever he is,” the Finance Minister said. “You know who I mean—the guy from the party with no managerial expertise. When Phase 2 kicks in, all our troubles will be over.”

“Will Phase 2 mean another cabinet shuffle?” the Minister of Drought asked. The previous shuffle had been

“Not this time,” the Finance Minister replied. “We will have the speculation about a cabinet shuffle, of course. That will take the headlines away from McSweeney.” “Gilhooly,” the Minister of Revival said.

“I don’t want to stand in the way,” said the Minister of Drought. “Just so long as we don’t lose the planes.”

“This year is Five,” said the Finance Minister.

“And Hoolihan doesn’t get in,” added the Minister Responsible for the Crow Whatchamacallit.

“Gilhooly,” said the Minister of Drought.

The cabinet ministers whooped and threw papers into the air. “Se-ven!” they chanted. Until a voice came from the back of the room.

The Finance Minister whirled. “Who said that?” he demanded. The Minister for Token Gestures raised his hand.

“Look,” the Finance Minister said, “we can’t get on with the business of bringing new prosperity to the land if people persist in nit-picking, negative thoughts and nay-saying, can we?”

Several ministers attempted to get a new chant of “Seven, Seven” going, but silence quickly settled. “If it isn’t Seven,” said the Finance Minister, “it could be Four. Remember that.”

Groans and mutters of “not Four!” swept the room. “Don’t worry,” the Finance Minister said. “It won’t come to that. Five will be a big hit. Seven will knock ’em in the aisles. Right, Dr. Strangecurve?”

The government’s longtime economic guru had a peculiar smile on his face as he put papers back into his briefcase and nodded to the Finance Minister. He stopped briefly to chat with reporters on his way out of the hotel. Afterward, they compared notes.

“What does ‘Gilhooly’ mean?” one asked.

‘The Prime Minister dispatched the former Finance Minister to Scotland, where he was to haunt the moors' 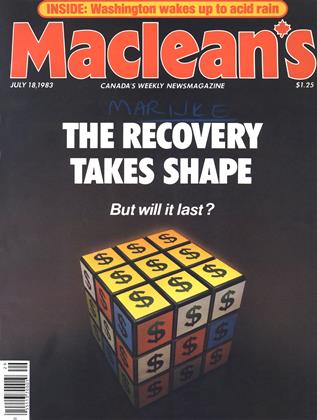