The paradox of the press legislation George Bain July 25 1983

There aren’t a lot of people around who would argue that having all the daily newspapers in the country in one, or even two, sets of hands would be a Good Thing. Consequently, there will be no great outcry even by the papers against the lid that James Fleming’s new daily newspaper act, if passed, will put on the acquisitive tendencies of the Thomson, Southam and other less extensive chains. There are too few owners of too many newspapers already. But it can be argued that the same proposals that are intended to keep competition from becoming less are also capable of working against there being more.

For example, if Ken Thomson in a fit of passion for the fray one day decided to take a run against Southam’s Hamilton Spectator, or if either Thomson or Southam decided that for a paltry handful of millions they might confer on the people of Saint John or Moncton the boon of competition to the Irving papers, someone, somehow, would say no. They are already at the limit of what they may own—beyond it, in fact, although it is not proposed to roll them back.

I am not so myopic as to have overlooked the fact that, except for the new sons of The Toronto Sun in Edmonton and Calgary and an unrelated Sun in Winnipeg, new city newspapers haven’t been popping up like dandelions on a suburban lawn. Neither is it obscure that the case now in the courts against Southam and Thomson under the Combines Investigation Act doesn’t arise from an excess of competitive zeal. Nevertheless, because they are chains and have the expertise and money, they have to be considered at least nominal candidates to start new newspapers or to convert weeklies into dailies. Ruling them out, therefore, compresses, however slightly, the chance of new competition developing locally, a paradoxical effect of a policy intended to keep competition from decreasing nationally.

Of anything in the Fleming proposals that might make newspapers better there is nowt. The multiculturalism minister would argue that the scheme to give newspapers as much as $150,000, in sums of not more than $50,000 a year, to set up regional or foreign bureaus is so intended—as it may be—but it will

come to nowt because the papers won’t have it. Mail subsidies, which publications in general have not jibbed at taking, are one thing—they are capable of being looked at as subsidies more to recipients of the publication than to the sender—but accepting cash money for maintenance smacks a little too much of being kept.

If there is a case to be made for government intervening at all to get newspapers to do more, a better means than offering cash would be to create incentives. That, in effect, is what the postal regulations did in the period 1933 to 1951, when the mails were much more important to newspapers in serving rural readers. Newspapers qualified for a cheap rate—1.5 cents a pound vs. four cents—if advertising did not exceed 50 per cent. Since it was not practicable to produce an ad-thin paper for mailing and a fatter one for urban readers, the 50-50 paper became the norm. Nowadays the rough rule is 60-40, the heavier end being ads, and not all keep it down to that on all days. The mails are not as important to newspapers now, but if ways can be found to create tax allowances to be earned by oil drillers because they produce a vital commodity, so, no doubt, they could for newspapers—if needed.

That, of course, is the question. Newspapers have been through a hard time but, according to media stock analysts, they are recovering very nicely. If there is no need, then perhaps the public is entitled to ask why more owners and publishers are not talking in such terms as these: “What’s a newspaper for? Is it only to make money? I don’t believe that. Newspapers have an inherent responsibility to enlighten people.” The words are those of Reg Murphy, publisher of the Baltimore Sun, replying on the telephone the other day to my question about how his paper, with a circulation of 180,159 daily and 380,000 Sunday, warrants seven foreign bureaus, with nine staffers and a 19-person Washington bureau. No Canadian newspaper or group does so well, including, among independents, The Toronto Star, with twice those circulation figures, and, among groups, Southam, with 15 dailies, plus the weekly Financial Times, and a combined circulation of 1.5 million. If we do not rise to the level of the American best, money and circulation won’t wash as an explanation. 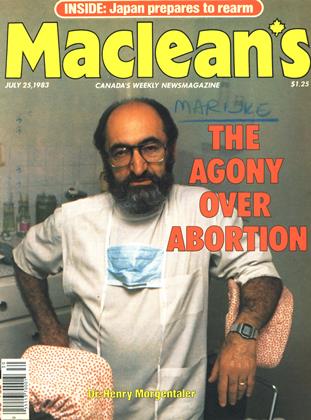