There is a funny feeling abroad in the land. It hasn’t been around for nearly 30 years. There’s a smell of nervousness to the Natural Governing Party, the Illiberals, as they sniff the wind and don’t like what they find. Suddenly, they realize, they have a leader who is 20 years older than Martin Brian Mulroney—The Jaw That Walks Like a Man. Abruptly, the perceptions have changed. Mulroney is being billed in the newspaper headlines as “the boy from Baie Comeau.” If a 44year-old ex-royal commissioner, ex-company president can be labelled a boy, a nearly 64 Pierre Trudeau starts to look like an old man. The Liberals are antsy, gulping their martinis rather than sipping them, poking and probing the Mulroney mandible, searching for flaws and weaknesses. But most of all they are eyeing the shoulder blades of Pierre Elliott Himself, wondering who will be brave enough to nudge them with a small jackknife in hopes he will take the hint. The shuffling behind the curtain is becoming audible. Some notes on the lineup:

John Roberts: Everyone’s candidate for the perfect cocktail party diplomat still retains the impossible dream. The Minister for Acid Rain has been getting a lot of exposure in the Excited States of America lately. Unfortunately, Yanks don’t vote in Canadian elections. Still plans to bring out a line of designer gumboots. The leadership? No chance.

Lloyd Axworthy: Major platform is the purchase of a new pair of horn-rimmed glasses to make him look more serious. If he gets any more serious, he may start to talk like Herb Gray. Has regained reputation somewhat since Broads Canada removed itself from his case. Dreams of being the lad of the Golden West marred slightly by the difficulty of retaining his Winnipeg seat as the western Canadian antipathy to the Liberals, whoever leads them, simply grows.

Herb Gray: World’s last remaining crewcut has been grown out so that it

now looks like a beaver’s tail (authentic Canadian nationalized beaver) so as to catch the trendy disco and hot-tub vote. He is the Michael Wilson of the Grits, as earnest as the day is long. The days are starting to get longer, you have noticed.

Don Macdonald: Owner of the

slowest-developing royal commission in Canadian history. Most voters have already forgotten what it is supposed to be studying. Shot himself in one of his large feet with the badly handled $800a-day stipend. Will find it hard to recover from that. Will be in only if

Turner is out. Formidable party man. Again, Mulroney makes the bald Macdonald look—in the age of TV—passé. (A larger Stanfield, though quicker.)

Ken Taylor: The hero of Tehran, now Canadian consul-general in New York, tosses his curls at many a banquet circuit in Canada. Has his eye on politics. Would be a completely new face on the scene while a familiar face. Party president Iona Campagnolo now floating his name on a trial basis.

Iona Campagnolo: Can Iona dress better than Mila Mulroney? Who has the better hairdresser? Who walks taller? Burning issues of our time. The Iron Maiden of Prince Rupert watches her flock of elbowing males and waits for an opening. Baie Comeau vs. Prince Rupert? The TV cameramen would love it.

Jimmy Coutts: Most powerful non-MP on Parliament Hill. Acts on behalf of constituents of Toronto’s Spadina, who rudely rejected him. Pillow dreams of succeeding PET somewhat hampered by

fact that he probably won’t have seat when the contest comes round. Would preserve the cherished Liberal bachelor tradition.

John Turner: Does not want to be Liberal leader. Wants to be prime minister. Will not give up Bay Street salary and Forest Hill prestige if his polling tells him he would be consigned to four or eight years in Opposition to Brian Mulroney, a punk 10 years his junior. That’s the trouble. Still shunning Grecian Formula.

Jean Chrétien: Running hard, but on the spot. Has been very subdued publicly lately, trying to figure out how to spell energy. Has discovered to his surprise not many votes in Alberta. Trudeau ignores him. It hurts.

Paul Martin Jr.: Waits in his corporate ambush in Montreal, trying to time his arrival on Ottawa scene. Montrealer Mulroney made it in one audacious leap, he reasons, why not another? Waiting for the call. The call has been put on hold.

Stan Roberts: The Harold Stassen of the Liberal party. Continually leaking stories that he is available to be prime minister. The leak ran through the floor.

Eugene Whelan: So certain of running that he has had his green felt cowboy hat cleaned and blocked. Would be no funnier than John Gamble. Politics’ answer to the McKenzie Brothers. Almost as droll as John Crosbie, and even heavier.

Pierre Trudeau: A legend in his own mind. Likes Mulroney personally, which is more than he can say about most in his own party. Enjoys tantalizing with his second retirement call. Party pressures growing too strong. Will go this fall. Plans to open an institute dedicated to his own ego. Will have an enrolment of one. 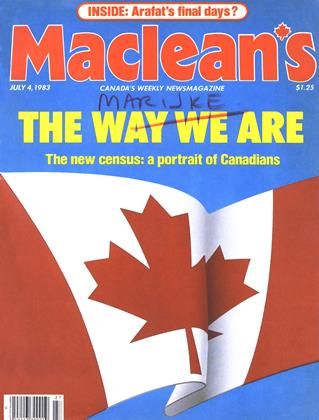