Charles (Chuck) Morris was lying in his hospital bed, wondering how much longer he would live, when he received a registered letter. It was an eviction notice from his landlord. “He said he was worried I might die in the apartment and get the place stuck in probate somehow,” recalls Morris. “Really, he was afraid he would catch AIDS from me.” For Morris, 40, the former publisher of The Sentinel, a bimonthly magazine for homosexuals, the eviction notice was the second in three years and still another blow in a series of misfortunes that began in the spring of 1981, when he learned that he had the killer disease AIDS (Acquired Immune Deficiency Syndrome).

Morris is one of 188 known AIDS sufferers in San Francisco. Although there are more cases in New York City, where half of the recorded 678 AIDS-related deaths have occurred, the disease’s impact has been particularly devastating in San Francisco, where homosexual men account for an estimated 20 per

cent of the city’s 705,000 residents. As the number of AIDS cases continues to rise—more than 1,700 in the United States so far and scattered cases in Canada and Europe—an epidemic of fear is sweeping San Francisco, where at least one new case is reported each day. Although 75 per cent of AIDS victims are homosexual males—the others are in-

The impact of AIDS in the city has been devastating: homosexual men account for 20per cent of the city’s population

travenous drug users, hemophiliacs and, inexplicably, Haitian immigrants—concern about a possible widespread public contagion is evolving to near-panic, because the cause and the nature of the disease remain a mystery.

The disease, which is almost always

fatal, breaks down the body’s natural system of immunities, often killing its victims with such ailments as Kaposi’s sarcoma, a rare form of cancer that causes skin lesions, or pneumocystis carinii, a pneumonia. Some doctors suspect that a virus causes AIDS, although they have not yet been able to isolate it. The U.S. department of health announced on July 12 that its discovery of a virus-fighting substance, which white blood cells produce, could provide a breakthrough, but it cautioned against premature expectations of a quick cure. So far, all available evidence suggests that AIDS can only be transmitted sexually or through blood transfusions.

In San Francisco much of the fear spawned by the disease is justified. Social and economic changes are transforming the city’s homosexual community in response to the growing awareness of how AIDS is transmitted. Recently, business in bars, bathhouses and clubs that cater to men seeking anonymous sexual contact has declined markedly. At least two bathhouses have closed. Others are posting public-health warning signs at the city’s request. Conceded Hal Slate, owner of the Caldron, one of the estimated 300 homosexual clubs in San Francisco: “The sex business is, if you will excuse the pun, soft.” The Caldron now posts signs advising patrons of supposed ways to maintain good health even while engaging in fre-

quent, undiscriminating sex: “Spend more time with your partner,” urges one sign. “Get to know him—before moving on to another.”

City officials are also concerned about the health risks that businesses catering to homosexuals pose. Homosexuals constitute an estimated 20 per

cent of the four million annual tourists to the “City by the Bay.” Explained San Francisco’s public health director, Dr. Mervyn Silverman: “To the degree that multiple, anonymous sexual contact takes place in certain facilities, then it poses a health risk. There is the potential that AIDS will be spread from here around the country.” Added city Board of Supervisors member Harry Britt, himself a homosexual: “You are risking your life if you go to bathhouses and private men’s clubs.”

Some homosexuals resent the stereotype of promiscuousness g that they are acquiring. They

0 point out that many homosex| uals form monogamous reíase tionships. Still, recently the vast " majority of homosexuals have

1 made changes in their social be“ havior. A recent study conducted by San Francisco psychotherapist Leon McKusick of

600 homosexual men revealed a decrease both in drug use and in the overall number of sexual contacts within the homosexual community. Explained Edward Power, project director of an AIDS hotline that takes calls from those who are worried about the disease: “There is much more concern now with our health and with having sex in ways that do not jeopardize that.” The hotline, which was receiving about 65 calls monthly when it started last July, now receives more than 1,500 calls each month. Many of the callers inquire about contracting the disease from public toilet seats and from holding subway straps.

Citizen response to the AIDS epidemic has been swift, but it has not always been wise. In fact, public concern has turned into panic because of inflammatory and often inaccurate news reports. Media-fuelled hysteria occurred after an article by New Jersey pediatrician James Oleske in the May 6 issue of The Journal of the American Medical Association (JAMA) described the deaths of four children and the infection of four others born into homes where there was recognized risk of AIDS. Newspapers and TV stations across the country picked up the story, and one paper in the San Francisco area carried the headline “Gay plague spreading to general population.”

What the media failed to report, however, was that most important AIDS researchers and government health officials in the United States immediately cautioned against drawing conclusions from incomplete news reports on the article which did not sufficiently emphasize the fact that each of the eight children lived in households where one or both parents were immigrants from Haiti or the Dominican Republic or were intravenous drug users.

Despite reassuring public statements, much of the damage had already been done. “There were at least eight evictions after those reports hit the front pages,” said Power of the AIDS hotline. “I took one call from a woman who wanted to know if she should hold her breath when the bus passed through the Castro [a neighborhood in which large numbers of homosexuals live].” The media have not only contributed to the panic but they have also, at times, fallen victim to it. When television technicians refused to be in the same room as two AIDS victims who had been invited to appear on a show at San Francisco’s KGO-TV, the diseased men were shunted to the makeup room and interviewed there by telephone. The theme of the program: “Demystifying AIDS.”

Misinformation continues to fuel the hysteria. Although there is no evidence to suggest that casual contact among

either heterosexuals or homosexuals spreads AIDS, the San Francisco police department has issued gloves and masks to officers for use at their discretion when dealing with people they consider to be at risk. Two nurses in San José, 50 miles south of San Francisco, resigned rather than treat AIDS cases. Some employees at San Francisco General Hospital will not deliver meal trays to AIDS sufferers. And an estimated 50 per cent of the city’s dentists wear rubber gloves when treating patients whom they consider to be high risk.

At the same time homosexual men are especially resentful at what they consider to be the federal government’s slowness in acting to combat the epidemic. “The government jumped all over legionnaires’ disease,” declared Dr. George Morgan, a prominent San Francisco physician who deals mainly with homosexual men. “But AIDS surfaced four long years ago, and only now is the government starting to do anything—now that they think it may spread into the straight world.” Responding to the criticism and the obvious severity of the epidemic, the U.S. public health department said in May that finding a cure for AIDS is now its “number 1 priority.” In June the federal government approved $12 million for AIDS research, and the U.S. department of health and human serii vices will spend $14.5 % million in 1983 and $17.7 million in 1984.

AIDS victim Chuck Morris, like most other AIDS sufferers, is bitter about the government’s slowness to act. “Given what has not been done, it is no surprise really that some people think that AIDS may be a mutated biological warfare strain being tested against gays,” he said. “I mean, who in America is despised more than gays or drug users?” According to health officials, at the present rate of infection, in three years AIDS could claim 100,000 victims; in five years, 1.6 million. Says Dr. Harold Jaffe, a member of the AIDS task force in Atlanta: “Looking for a quick fix is not very realistic.”

For his part, Morris is acutely aware that his time is running out. “You know, almost no one lives three years with AIDS, like I have,” he said. “That is hard to live with. I keep waiting for something to happen, a cure. I should be dead, but here I am. But I am not kidding myself. I can’t wait forever.” 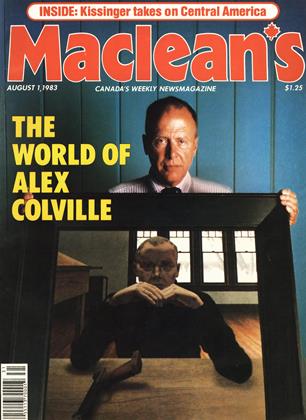